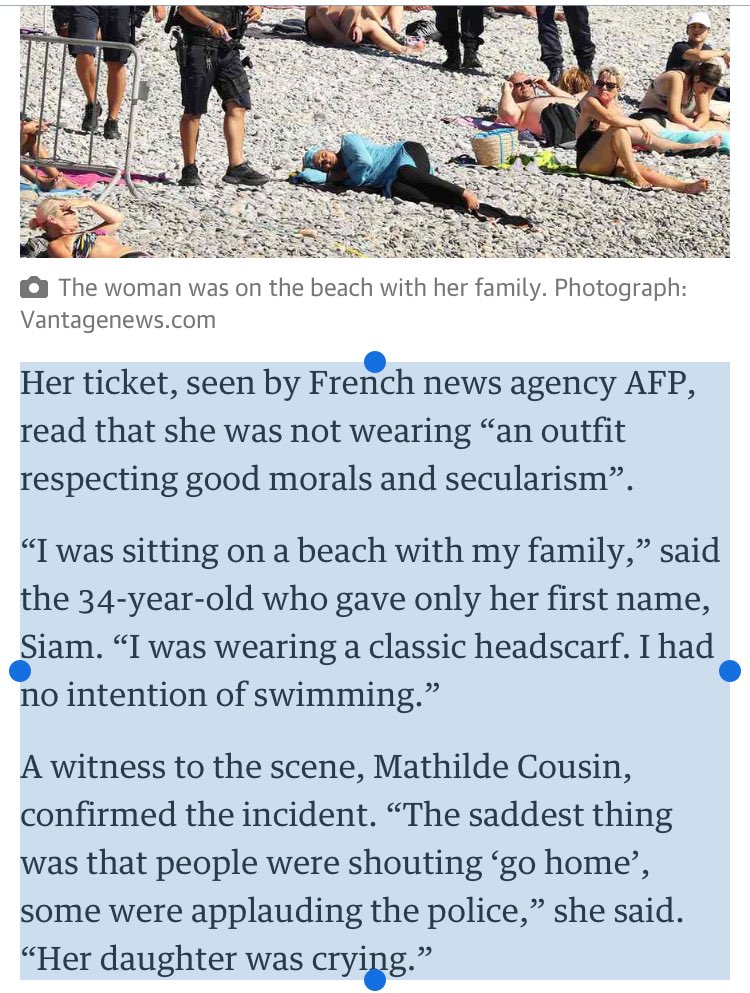 From the Daily Mail in Britain:

Get ’em off! Armed police order Muslim woman to remove her burkini on packed Nice beach – as mother, 34, wearing Islamic headscarf is threatened with pepper spray and fined in Cannes

A woman in Cannes claimed ‘racist’ officers wanted to humiliate her

Algerian businessman said that he will pay any penalties women incur …

The French ban on the burkini is threatening to turn into a farce as police officers armed with pepper spray and batons marched onto a beach today and ordered a woman to strip off.

Four burly cops stood over the middle-aged woman, who had been quietly sunbathing on the Promenade des Anglais beach in Nice … and watched her take off a Muslim-style garment. …

Another young Muslim mother was ordered off the beach at Cannes and fined for simply wearing a headscarf.

Three armed officers pointed a pepper spray canister in the 34-year-old’s face and told her she was in breach of a new rule outlawing swimming costumes that cover the entire body.

She said the ‘racist’ officers simply wanted to humiliate her in front of her children and other family members, even though she was not even wearing a burkini.

The Nice authorities, according to Dutch NOS TV today, have banned ‘burkini’ bathing gear ‘because of terrorist attacks’.

‘Dear’ Nice authorities: the bloody atrocity in your city was not perpetrated by any headscarf or ‘burkini’ wearing woman. It was by a truck driver who never went to a mosque, never prayed, never fasted during Ramadan, who drank alcohol and ate pork. But who had grave mental health problems, financial problems and divorce problems, and was said to be a closet gay man.

Conspiracy theorists blame the 1789 French revolution on ‘the Illuminati’ or on ‘the Jews.’ Though the real cause was the inequality and oppression under the French absolute monarchy.

Conspiracy theorists claim that Jamaican Olympics gold medal athlete Usain Bolt is supposedly a member of the Illuminati; non-existent now, existent only for a short time in eighteenth century Bavaria in Germany.

Conspiracy theorists blame the 1917 Russian revolution on ‘the Jews’; more specifically on the non-existent ‘Elders of Zion’. Though the real cause was the inequality and oppression under the Russian czarist absolute monarchy.

And similarly now, ISIS-style terrorism gets blamed on women’s swimming gear; instead of on its real causes, like the CIA‘s 1980s war in Afghanistan; Bush‘s and Blair’s 2003 invasion of Iraq; NATO countries’ alliances with Erdogan’s Turkey, the Saudi monarchy and similar regimes; discrimination against immigrant people in NATO countries, driving naïve teenagers into the arms of jihadists; etc.

From daily The Guardian in Britain today:

Last year, French authorities closed off a public beach near Cannes for the benefit of the royal family of Saudi Arabia.

I bet the French authorities did not enforce ‘secularist’ and ‘republican’ ‘decency police’ rules against any Saudi royals then. And I suspect that if the Saudi royals will come back, then these authorities will close off that beach again for all non-royals; headscarf or no headscarf, ‘burkini’ or bikini. Even though it is far less far-fetched to link the Saudi government to terrorism than to link non-royal women wanting to swim or sunbathe in clothes they feel comfortable in.

The campaign in Germany for domestic repression and war is assuming ever more openly racist forms. Last Friday, the federal and state interior ministers of the Christian Democratic Union/Christian Social Union (CDU/CSU) spoke out in favour of a partial ban on the burqa and niqab during their so-called “Berlin Declaration.” Since then, politicians and the media have intensified their agitation against Muslim citizens and refugees: here.