This video is called BEAUTIFUL BIRDS IN AVIFAUNA.

There are about 1800 birds there. I cannot honestly claim we saw all of them.

We did see the biggest birds, ostriches. And the smallest birds, Surinamese hummingbirds.

We did see the great hornbill couple, together for forty years now.

And we did see wild birds, not officially included in the 1800 number: hundreds of jackdaws flying together. Two grey herons trying to catch fish when the Humboldt penguins were fed. A chiffchaff singing. A blackbird. And free flying white storks raising their chicks on the artificial nests of their Avifauna colony. 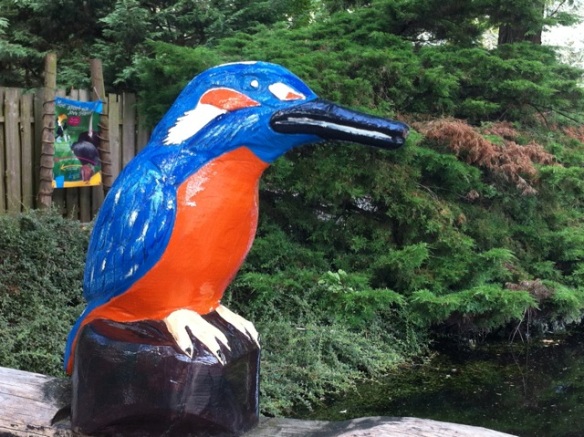 There are wooden bird sculptures on the tops of signposts in Avifauna. And also this wooden kingfisher on a bridge. The photos in this blog post are all made with a mobile phone. 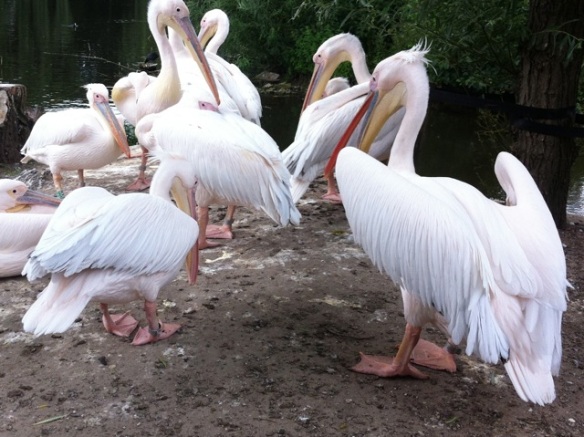 At noon, the great white pelicans were fed. A dozen wild great cormorants had joined them, hoping to get a fish too.

Three times a day, there is a bird free flight demo in Avifauna.

In the Netherlands, there are scandals about trade in wild birds, especially raptors and owls. Some of these birds are used in commercial bird shows. The birds are then driven around all over the country in small cages in vans. During the shows, eagles, owls, vultures, falcons and other birds are on short leashes. Basically, the show bosses don’t tell their audiences anything about the birds during the shows.

The Avifauna free flight demos are different from this. They are three times a day during the summer months.

Each show is with different birds. In the morning, a red kite participated.

I saw the demo in the early afternoon, along with hundreds of others on the bleachers near the pond. With some of the birds in these two videos, but not all of them; and with other birds as well.

The demo started with macaws flying high over the pond, calling each other. The blue-and-yellow macaws and scarlet macaws reminded me of when I was in Suriname. The parrots landed and were rewarded with nuts by the trainer; who meanwhile, told how the birds live.

Then, a white-throated magpie-jay. Three children on the bleachers got three sticks. The jay landed on the children’s arms, took the sticks, and brought them to a nest under construction near the pond.

Then, a flock of scarlet ibises, with some cattle egrets.

At the end of the demo, a flock of white doves. And there was a collection of money for helping wild birds to survive in their habitats.

In the Australian birds compound, emus. Also maned geese. Two of them cleaning each other’s feathers. 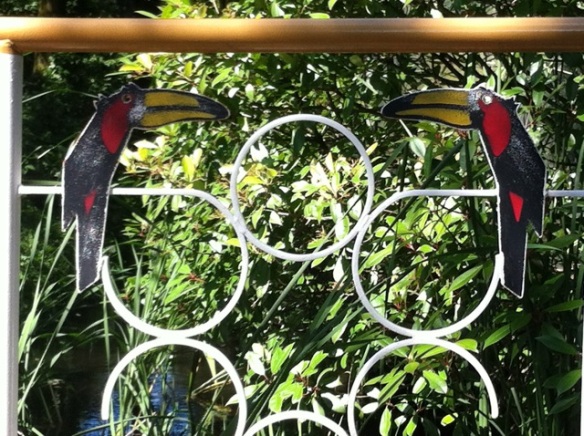 A bridge near the tropical birds hall had toucan images on it.

In the tropical birds hall, a great kiskadee couple sat near the top of the hothouse; reminding me of Suriname again.

Tawny frogmouths shared their aviary with bush stone-curlews whose chicks had hatched recently. Both species are from Australia.

This video is about the lori landing in Avifauna. There are three bird species in that building. Most are rainbow lorikeets.

This video is about rainbow lorikeets feeding at the lori landing.

There are also some scaly-breasted lorikeets and blue-faced honey eaters.

At the entrance of the building, people can buy small cups of nectar. Inside, the birds will sit down on people’s arms and shoulders to drink the nectar. 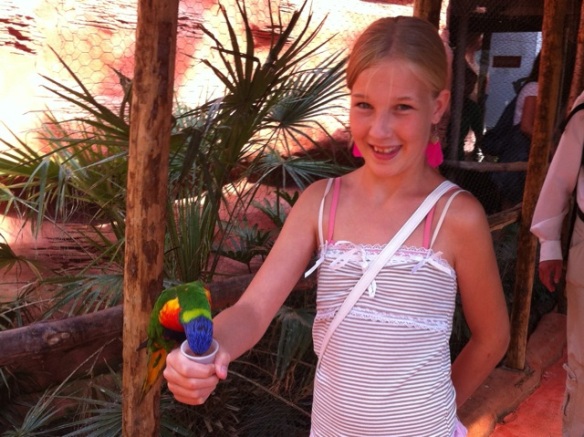 The lorikeet on this photo took a deep bow to reach the nectar.

One of the world’s most colorful parrots and a familiar resident of zoos and aviaries worldwide, the rainbow lorikeet is a stunning bird with a wide range of subspecies that show just as much variation in their colors as the bird has in its rainbow-hued feathers: here.