This 8 June 2020 International Peace Bureau video says about itself:

Anti Racism Protest in the United States: No Justice, No Peace

George Floyd’s atrocious murder at the hand of the police in Minneapolis, Minnesota on May 25 represents only the most recent incident of racism and police brutality in the United States. The resulting protests have spread not only across major US cities, but have gone global.

The International Peace Bureau (IPB), the Campaign For Peace, Disarmament & Common Security (CPDCS), and Peace Action have invited three racial justice and peace movement leaders to provide background about the institutional racism and structural violence that led to George Floyd’s murder, as well as the massive resistance to racism and police brutality. Speakers include:

Moderated by and Joseph Gerson (AFSC) with concluding remarks by Philip Jennings (IPB).

The global protests and the fight against capitalism, 8 June 2020. The global wave of demonstrations against police violence is the response to decades of unending war, the destruction of basic democratic rights, and a massive concentration of wealth in the hands of a tiny ruling elite: here.

Tens of thousands continue UK protests against racism and police brutality. By Robert Stevens, 8 June 2020. More than 100,000 people across Britain continued to protest the death of George Floyd over the weekend.

SIXTY THOUSAND youth and older workers joined the Black Lives Matter march in London on Saturday, from Parliament Square to the Home Office, then on to the American Embassy before heading back to Whitehall, following the Minnesota police’s brutal murder of George Floyd last month. There were also scores of other marches across Britain, including in Manchester, Leicester, Sheffield, Newcastle, Glasgow, Bristol, Luton, Cardiff, Bath and many of other towns and cities: here.

‘ONE SOLUTION – Revolution’ rang out through the 40,000-strong crowd outside the US embassy in Vauxhall, south-west London yesterday as a mass demonstration broke out in anger at the US police killing of George Floyd: here. This photo shows a protester in Manchester, England with placards referring to the police killing of US African-American woman and coronavirus emergency health care worker Breonna Taylor and the preventable death of coronavirus of African British rail worker Belly Mujinga. Ms Mujinga was killed by bosses exposing her to coronavirus danger. 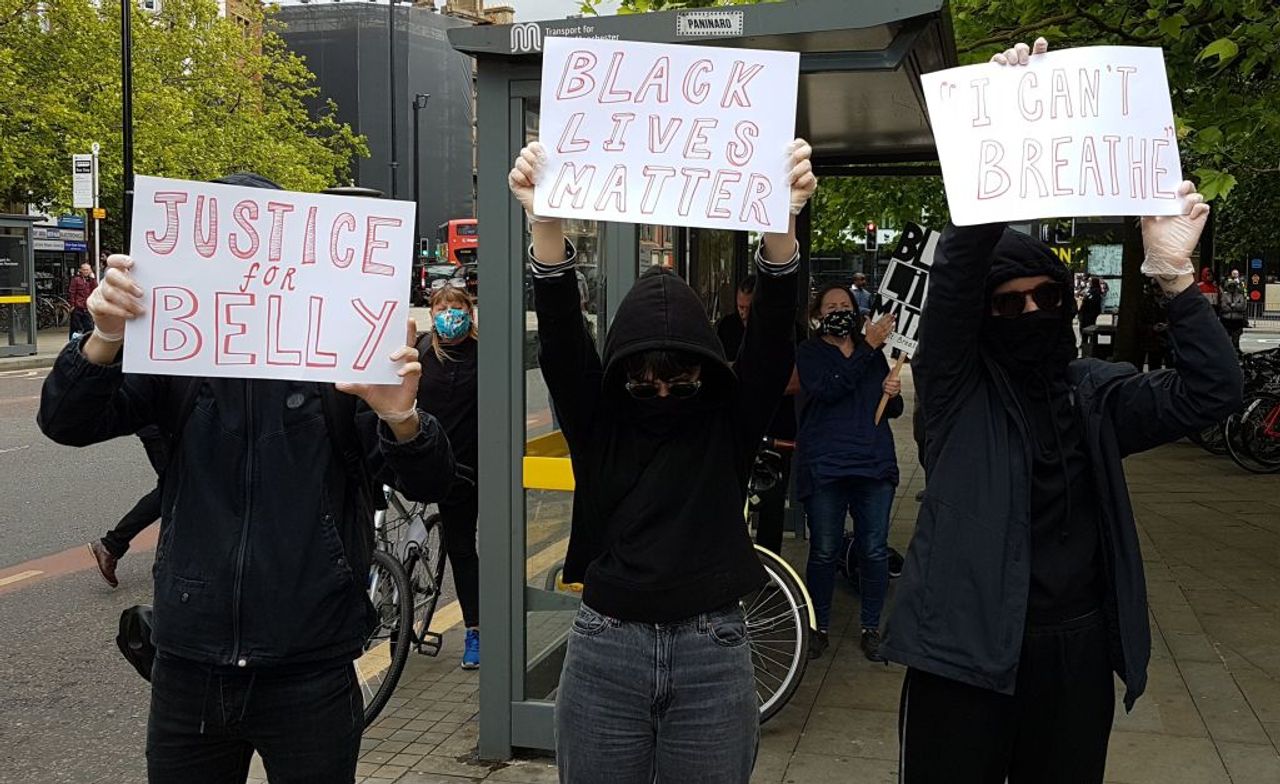 In Bristol, England where thousands of people gathered, protesters pulled down a statue of 17th-century slave trader Edward Colston and dumped it into the harbour of the Avon river.

Protesters in Bristol have pulled down the statue of 17th-century slave trader Edward Colston and pushed it into the harbour.https://t.co/I2uJB8inGL

By Bethany Rielly and Niall Christie in Britain, 7 June 2020:

BLACK LIVES MATTER (BLM) protests continued to erupt across Britain today, with tens of thousands demanding justice for George Floyd and an end to entrenched racism.

A massive crowd gathered outside the US embassy in south London, with anti-racist protesters taking a knee and chanting: “No justice, no peace.”

Demonstrators highlighted Britain’s guilt in the repression of black and ethnic minorities, demanding the closure of immigration detention centres and holding signs reading: “The UK is not innocent.”

Editorial: This new anti-racist movement has our rulers worried

THE reason why hundreds of thousands of people in Britain have taken to the streets to affirm that Black Lives Matter is not simply in solidarity with the movement in the United States.

It is because racial discrimination generally and, in particular, the culture of impunity which isolates the coercive apparatus of the state from public accountability is an offence again humanity and reason in this country, as in many others.

When police officers visit unjustified violence upon the citizens whose rights they are supposed to protect, it contradicts the official myths which policing in class society necessarily entails.

The demonstrations taking place in recent days are a big worry for our rulers, and for the army of opinion-makers employed to explain these events to us, it presents a very considerable challenge to their conventional liberal thought.

Donald Trump’s subversion of the conventional niceties of US politics, his open encouragement of right-wing militias, his crudely constructed axis of opinion which puts evangelicals, white rural Southerners, arch-conservatives, racist cops and right-wing billionaire nutjobs against normal folk is alarming for the more thinking elements in a US ruling class that includes — in its arc of big business, bankers and state bureaucrats — the Democratic Party establishment.

With millions of North Americans now unemployed and thus without medical cover, the intensity of the political and economic crisis means that any event has the capacity to ignite a rebellion.

And with fissures in the fabric of conventional political thought and action another myth about the “Land of the Free” dissolves.

Some 59 per cent of black American men say that they have been unfairly stopped by the police because of their race or ethnicity.

In the US, as in Britain, these mass mobilisations mostly involve young people, including wide sections of working-class youth who have a different take on the police to older generations.

The people who today sang Oh, Jeremy Corbyn are joined on the streets by their younger siblings.

It is clear that despite the coronavirus crisis, they have made a calculated decision to demonstrate, wearing masks and gloves and where possible, maintaining social distancing, but demonstrate nevertheless.

The latest report which reveals that Theresa May’s “hostile environment”, now managed by Priti Patel, has blocked BAME and migrant people from accessing healthcare during the coronavirus, is just the latest indication that 21st-century capitalism reproduces the virus of racism with the same facility that Tory policies allow Covid-19 to spread.

It is time for us to see justice for BAME communities. The fight against racism is a class struggle – and the labour movement must step up, writes HOWARD BECKETT.