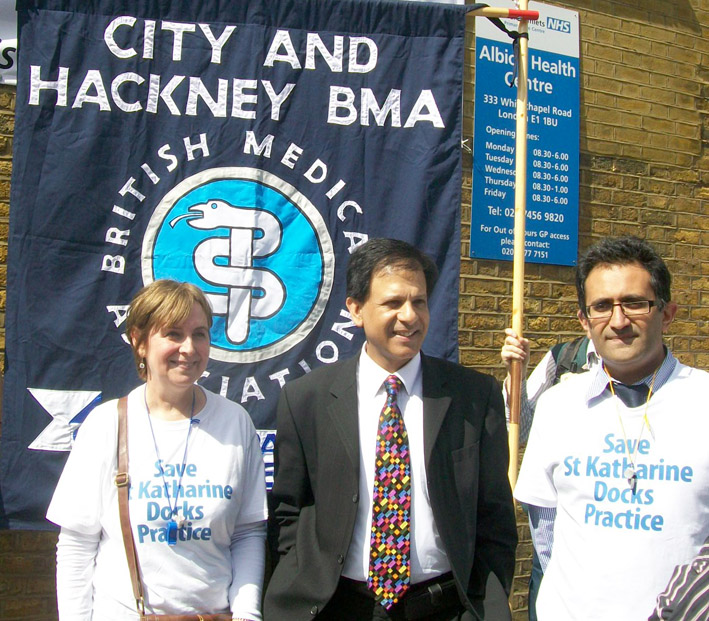 ‘THE Government has five tests it has said must be met to ease lockdown – the first of which is “making sure the NHS can cope”,’ said BMA Council Chair Dr Chaand Nagpaul yesterday.

‘Six weeks into this crisis,’ he continued, ‘how can the government be confident that this condition is anywhere near being met, or that the pandemic is under control, when the very people on the frontline are not being made safe?’

Nagpaul was announcing the results of the biggest survey of frontline NHS doctors since the coronavirus crisis began, with over 16,000 doctors answering questions on PPE (personal protective equipment) provision, their well-being and drug shortages.

The survey revealed nearly half of doctors have sourced their own PPE for personal or departmental use, or they have relied upon donations.

Dr Nagpaul said: ‘In what is the biggest survey of frontline NHS staff during this crisis, thousands of doctors have told the BMA that they have had to personally buy PPE for themselves or their department or rely on donations.

‘55% of GPs told us they sourced their own PPE or relied on donations and 38% of hospital doctors.

‘On the one hand, it shows how resourceful they have been and how much support there has been from the general public in providing kit; but far more importantly, it is a damning indictment of the government’s abject failure to make sure healthcare workers across the country are being supplied with the life-saving kit they should be.

‘The survey shows that overall, there has been an improvement in the provision of PPE, but if almost half of all doctors report that they had to resort to purchasing PPE themselves or rely on donations, then there is still a lot for the government to do to protect its frontline.

‘Doctors are still reporting shortages in gowns, with one in three not having enough gowns in settings where they are most at risk with the most poorly of Covid patients.’

One doctor commented: ‘The PPE situation is an outrage for all staff. Lives lost for want of plastic visors, masks, and eye protection.’

Another said: ‘Adequate PPE supply in terms of gowns and visors would reduce stress within the team as almost all of our patients are Covid positive.’

65% of doctors said they felt only partly, or not at all protected from coronavirus, in their workplace. And one in four report worsening mental distress during the pandemic including depression, anxiety and burnout.

Dr Nagpaul added: ‘30% of doctors told the BMA they wouldn’t bother to speak up about an issue such as PPE or drug shortages, as they didn’t think anything would be done about it.

‘That’s a terrible state of affairs and the BMA calls upon NHS England and the government to remind employers to encourage and support staff to speak out and be heard.’

ACCORDING to the Johns Hopkins University count, the coronavirus pandemic has infected more than 3,402,400 people worldwide and has claimed the lives of at least 242,000 people.

In the United Kingdom, the Covid-19 tally has surpassed 183,400, with over 28,200 fatalities. Britain is heading for second position after the USA as far as the scale, depth and cost of the coronavirus crisis is concerned.

It is right at the sharpest point of the world crisis, at the height of the mass slaughter, that the bosses and their Tory government are now urging that there must be a return to school, and a return to work.

The amazing discovery has been made that the two-metre distancing rule, which people have been arrested for not carrying out, is after all incorrect and can be made redundant. The Sunday Telegraph has trumpeted that an announcement is to be made next Sunday of a return to school after a review of the lockdown.

The Tory party stands for big business. It is desperate to rescue British capitalism which is on the rocks. UK industries are closed, BA and Ryanair are to sack thousands more, Gatwick Airport has been made redundant and millions of workers are furloughed, until the end of June, when 11 million UK unemployed will be added to the current UK total.

Meanwhile, the banks are collapsing under the weight of their debt, which as in 2008 they intend to heap on the backs of the working class.

The UK bosses’ big brother, the USA boss class, is in even worse repair. Its economy has crashed with 37 million workers sacked in just a few weeks. Warren Buffett’s Berkshire Hathaway holding has reported a loss of $55 billion in Q1 because of the Covid-19 pandemic, compared to $21 billion in profits over the same period last year.

In fact, the British Tories in 2016 refused even to prepare for the pandemic that they were told was on the way by their scientists. Their loyalty and faith in capitalism was absolute. They continued to hack at the NHS and attack the junior doctors so that when the pandemic did strike, the NHS was on its knees.

Their refusal to prepare to fight the pandemic saw a runaway epidemic of Covid-19 in the hard-hit areas of the UK, a massacre of the elderly in the care homes, and a decimation of NHS staff who heroically ran into the breach, without equipment to do the job.

PM Johnson is being depicted as the man who escaped death at the hands of Covid 19. In fact, he and his government will be known as the party that disarmed the UK and slashed its NHS, opening up the way for the greatest pandemic since the Black Death.

Now with capitalism collapsing, the Tory party, aided by a Labour Party whose shadow Home Secretary Nick Thomas-Symonds yesterday refused to even criticise the Tories, are getting ready to make the working class pay for this crisis of capitalism by forming a national government.

The trade unions must now stand up for the working class and hit back with great energy and determination to make the bosses pay for the crisis.

Yesterday, Dr Chaand Nagpaul, BMA Council Chair revealed: ‘In what is the biggest survey of frontline NHS staff during this crisis, thousands of doctors have told the BMA that they have had to personally buy PPE for themselves or their department, or rely on donations.

‘55% of GPs told us they sourced their own PPE or relied on donations and 38% of hospital doctors … it is a damning indictment of the government’s abject failure to make sure healthcare workers across the country are being supplied with the life-saving kit they should be.’

The NEU teachers’ union opposed an immediate return to school, insisting that: ‘The new case count must be much lower than it is now … They must have a national plan including parameters for both appropriate physical distancing and levels of social mixing in schools, as well as for appropriate PPE, which will be locally negotiated at school-by-school and local authority level.

‘There must be comprehensive access to regular testing for children and staff to ensure our schools and colleges don’t become hot spots for Covid-19.’ The National Education Union is very clear that for schools to reopen ‘we need to have sound scientific evidence that it is safe to do so. The NEU’s petition to that effect has over 200,000 signatures.’

In fact, the only way forward is for the trade unions to oppose the Tory attempt to stampede a return to work. They must demand that the lockdown continues on full pay, as was the case in China.

The unions must organise a general strike to put an end to British capitalism by nationalising the banks and the major industries under workers control. This is the way to rid the UK of Covid-19 forever by bringing in socialism and putting an end to capitalist barbarism!

UK Nightingale field hospitals to be “mothballed” as coronavirus death toll reaches 28,446. By Alice Summers, 4 May 2020. The new Nightingale facilities were meant to provide overflow capacity to overwhelmed hospitals, but patients have been turned away due to a lack of suitable equipment or staff.

ASOS warehouse workers: Lives versus corporate profit in the UK. By Tony Robson, 4 May 2020.