This March 2015 video is called Longyearbyen, Svalbard, Norway: The World’s Most Northerly Town.

In the early morning, a male ptarmigan on a village roof.

Opposite the dog cages/eider duck colony, the Adventdalselva river flows into the fjord. Ice floes flow downward with the river. This convergence of sea water and fresh water attracts birds. 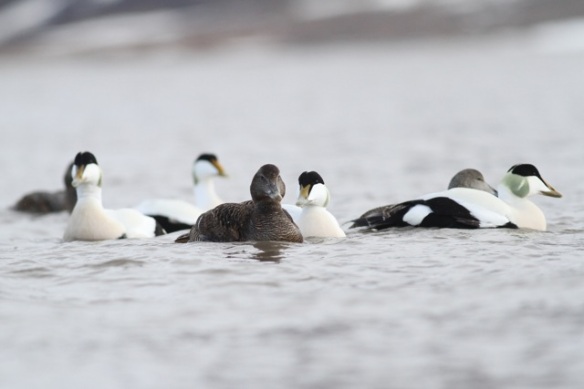 Quite some eider ducks, probably local colony residents, swim there.

Also, black guillemots. Adult birds, like the two individuals on this photo, are black with a white wing patch in summer. Immature birds have small black spots on the white patch.

Pale-bellied brent geese. There is disagreement whether they are a separate species from, or a subspecies of “normal” brent geese. Hunting on Svalbard in the first half of the twentieth century almost made them extinct. There are still only a few thousand of them; they have not yet recovered to former levels.

We go west of Longyearbyen. Near the camping, an Arctic fox, with more of a summer coat than the one which we saw yesterday.

An Arctic skua on the tundra meadow.

At an inlet, artifical islands for Arctic tern nests have been made. So far, only a few terns have already returned from their spring migration from the Antarctic; the longest journey by any bird species. A small flock of early terns flies around, calling.

Kittiwakes, barnacle geese, and glaucous gulls have been earlier in coming here than Arctic terns.

More to the west, many fulmars fly along the coastal cliffs. Nearly all of them fly to the left, the west. 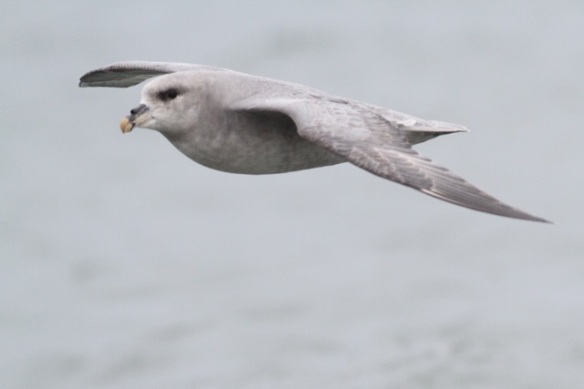 On a stony mountain meadow, a barnacle goose.

As we go further west, we hear calls from a little auk colony. Our next destination.

Fulmars and plastic, research in the Netherlands: here. And here.