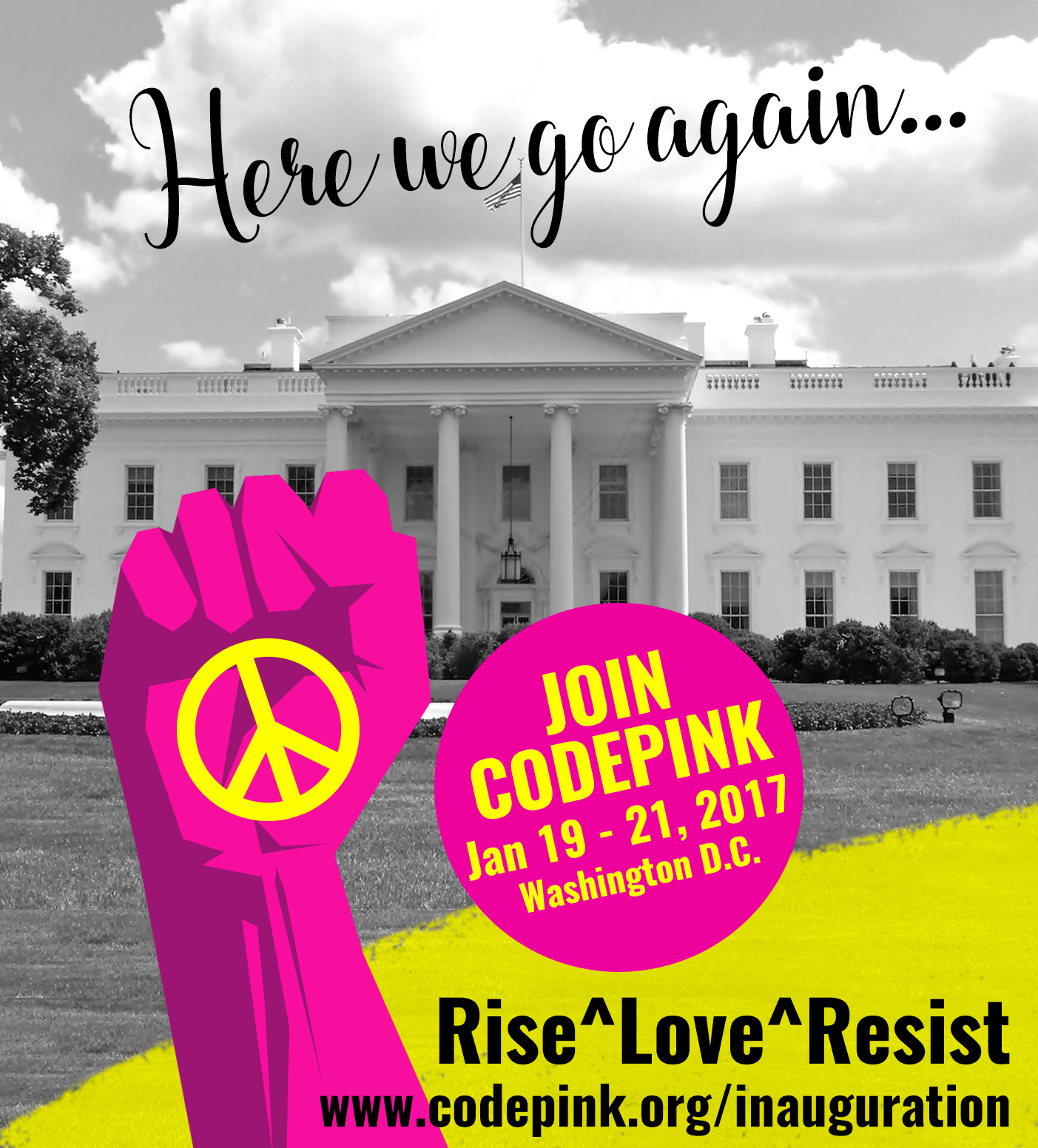 From the site of Codepink, pro-peace women in the USA:

Join CODEPINK for three days of Presidential Counter Inauguration activities in Washington, D.C. January 19-21. We will be participating in the Peace Ball, Occupy Inauguration, Disrupt J20, Women’s March on Washington, and more.

Get ready for the inauguration of Donald Trump by exposing his agenda and how we can effectively resist. A panel of experts/activists will speak about immigration, race, environment, economic policy, Islamophobia and foreign policy. This will be the first of a monthly series.

The night before the inauguration we will be at the National Museum of African American History and Culture for the 2017 Peace Ball: Voices of Hope and Resistance. We and our partners will celebrate the accomplishments and successes of the past four years and vow to continue to be the change we want to see in the world. Distinguished guests and hosts will include Medea Benjamin, Jodie Evans, Alice Walker, Angela Davis, Danny Glover, Eve Ensler, Van Jones, Amy Goodman, and many more. There will be food, open bar, live music, and dancing. All museum exhibits will be open during the Peace Ball.

Get your CODEPINK tickets here!

We will use our bodies to form a giant peace sign or other shape and take an aerial image from above.
When: TBA

All Day: Occupy Inauguration: The Revolution Continues and Disrupt J20

The UnNaugural Concert will include Grammy-nominated vocalists Sweet Honey in the Rock, musical duo Emma’s Revolution, and more. Funds raised by the event will go to support the American Civil Liberties Union, Brady Campaign to Prevent Gun Violence, League of Conservation Voters, National LGBTQ Task Force, and Planned Parenthood. Get your tickets at unnaugural.org

Throughout Inauguration day, and during the January 21 Women’s March on Washington, we will participate in One Billion Rising Revolution Solidarity Against the Exploitation of Women flash mobs. Each Valentine’s Day CODEPINK joins groups across the world to rise against personal, systematic, and state-sponsored violence against women. This year we will also join One Billion Rising to dance and rise through Inauguration in a call to action for the coming four years. Start learning the Break the Chain dance choreography now! See video.

January 21: Women’s March on WashingtonWe will march together with our partners and children for the protection of our rights, our safety, our health, and our families and in solidarity with those who were most insulted, marginalized, and threatened during the election cycle – immigrants of all statuses, Muslims and those of diverse religious faiths, people who identify as LGBTQIA, Native people, Black and Brown people, people with disabilities, survivors of sexual assault. We will send a bold message to the Trump administration on their first day in office, and to the world, that Women Say No to War and that defending the most marginalized among us is defending all of us.

Join the CODEPINK team to Rise ^ Love ^ Resist! If you have questions, email ariel@codepink.org!

The #WeRise Teach-In will be a warm space for folks to come to gain a deeper understanding of the critical challenges facing our nation, find ways to plug into grassroots campaigns that tackle those challenges, and connect with people from a vast array of movements and acquire skills to become more effective organizers at home.

Looking for housing? Check out the Washington Peace Center’s helpful housing board!

How to Request Inauguration Tickets:

Find out who your Senators and House Representative are if you do not already know.
Go to their website to see how they prefer to be contacted, whether by phone, email, or if they have an inauguration ticket request form on their website. Use the preferred method to send this message:
Dear Senator/Representative ___________,
I would like to request tickets for the January 2017 Presidential inauguration in Washington DC.Sincerely,
Your Name
Address + Telephone number + Email
Make sure you know where to pick up your tickets. You may be able to pick them up at your senator or congressperson’s local office. However, in some cases, you have to wait until you arrive in Washington D.C. to pick up your tickets.

COULD THE WOMEN’S MARCH BE THE BIGGEST ‘INAUGURATION DEMONSTRATION?’ “More than 100,000 people have registered their plans to attend the Women’s March on Washington in what is expected to be the largest demonstration linked to Donald Trump’s inauguration and a focal point for activists on the left who have been energized in opposing his agenda.” [WaPo]