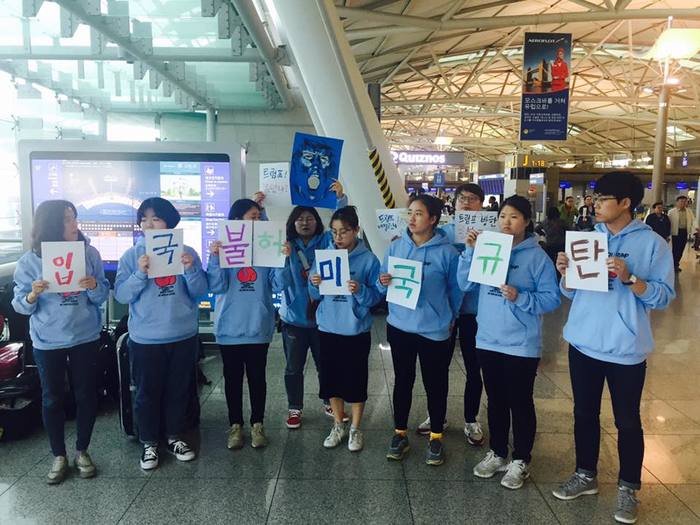 Fourteen members of the Fellowship of South Korean Youth — calling themselves the “Ban Trump’s Crazy Action” (BTC) delegation — were stopped at Incheon airport on October 25 and prevented from boarding their planes to the United States, where they had planned to protest Trump’s war threats in Korea. The group, which had planned to visit New York, Washington DC, and Los Angeles to demand an end to U.S. sanctions and war threats against North Korea, was turned away despite having acquired proper documentation to visit the United States.

The members of the delegation were told by the United Airline staff that there were problems with their visas. When the delegation asked for an explanation, they were told, “You need to find out why from the U.S. Embassy in Seoul. Due to privacy concerns, we cannot release any information.”

Following their entry denial, the BTC delegation held a press briefing at Incheon Airport. One representative of the delegation stated, “We received our visas through the proper channels, but suddenly our visas were rejected. We don’t understand what is so free about the so-called ‘land of the free.’ Every member of the BTC delegation is furious about this.”

Every member of the delegation had received an ESTA (Electronic System for Travel Authorization) approval. According to the delegation, there was no further explanation from the airline staff as to why the visas they had received were denied. Later, the delegation members found out that their ESTA approval’s were canceled prior to checking in to their flights.

One of the members of the delegation took a separate flight and managed to arrive at JFK International Airport in New York before being detained without telephone access and deported back to South Korea the next day.

U.S. anti-war/peace activists, including the Task Force to Stop THAAD in Korea & Militarism in Asia and the Pacific and Nodutdol for Korean Community Development released a joint statement denouncing the U.S. government’s decision to ban the entry of the South Korean activists:

As organizations and individuals who advocate open borders, freedom of speech, and peaceful resolution of international conflicts, we strongly protest the U.S. entry ban of the members of BTC and demand a full explanation for this action and immediate reversal of this decision. We also forcefully oppose the Trump administration’s escalation of tension with North Korea, fully support South Korean peacemakers mobilizing to protest Trump’s visit to their country and preparing for mass demonstrations on November 4th, and stand in solidarity with all people – Koreans, citizens of the United States, and others throughout the world – unconditionally committed to preventing a second Korean War.

The list of organizations endorsing the statement include CODEPINK, Peace Action, US Labor Against the War, Veterans For Peace, the United National Antiwar Coalition (UNAC), among many others.

Trump will visit South Korea on November 7 and 8 as part of his upcoming Asia tour, and South Korean anti-war/peace activists plan to hold a series of actions to protest Trump’s hostile policies and war threats against North Korea. Peace groups are planning a mass demonstration in Seoul on November 4. Korean Americans plan to hold solidarity protests in Los Angeles, New York, and Washington DC.

The White House has quickly undercut suggestions by US Secretary of State Rex Tillerson on Tuesday that Washington was willing to start talks with North Korea without preconditions. The latest differences emerge amid growing signs that the Trump administration is preparing to wage war against the Pyongyang regime in the coming months unless it capitulates completely to US demands: here.

11 thoughts on “South Korean peace activists banned from the USA”