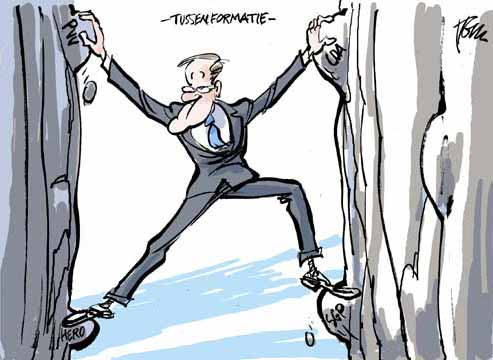 The Dutch government quit this evening after talks to nail down a set of cuts fell through.

Prime Minister Mark Rutte and his cabinet, some of Europe’s most pro-austerity politicians, handed in their resignations because they couldn’t find a way to chop their budget deficit to the European Union’s 3 per cent limit.

Talks with far-right politician Geert Wilders’s PVV party broke down on Saturday, with him saying that it didn’t make sense “to suffer for the sake of the dictators in Brussels.”

The planned austerity measures would have slashed foreign aid and raised the retirement age from 65 to 66.

The opposition Labour Party accused Mr Rutte of “dropping the ball at the worst possible moment” and demanded elections in June.

Here is an article about this from the Dutch Socialist Party (further to the Left than the PvdA (Labour)).

The coalition of three Right wing parties had 76 seats, a majority of just 1 in the 150 seat parliament (one MP of Wilders’ party defected recently, so they had just 75 seats). Polls say that these three parties together would get less than 70 seats now (apart from the bad blood between VVD and CDA on one hand and PVV on the other hand, because of the collapse now). Rutte’s VVD still has a chance of becoming the biggest party. But they are predicted to get only about 28-38 seats, by far not enough to form a government on their own.

Muslims are discriminated against in Holland: Amnesty International: here.

Over 100,000 people rallied in Prague on Saturday to protest against the teetering right-wing coalition and its anti-social austerity agenda: here.