The painting is said to be inspired by ancient Greek literature, a story by Aesop. The fable tells about a wise owl addressing a meeting of birds, warning them about dangers, like humans catching birds with glue.

However, the painting is rather about the central owl acting as a conductor for the sound of the various birds around him.

Like the one by Jan Fyt (a pupil of Frans Snijders). 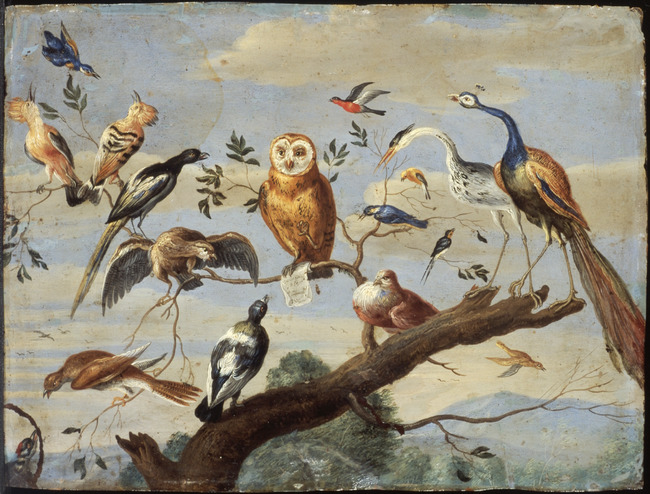 Jan van Kessel‘s painting is very similar to Snijders’. It adds a landscape. (UPDATE: Is this really Jan van Kessel’s work? Recently, it has been ascribed to Paul de Vos.)

When, on 18 May 2012, I visited the exhibition in the Hermitage museum in Amsterdam about seventeenth century Flemish painters like Rubens, Van Dyck and Jordaens, Snijders’ painting was one of the exhibits.

That afternoon, there was also a lecture about the painting, by ornithologist Nico de Haan. BirdLife in the Netherlands organized it.

Many people had come for the lecture in the Hermitage museum hall.

De Haan pointed out that Rubens was good at painting many subjects, but not birds. He often left painting birds on his works to others, including Jan Brueghel the Elder; and Frans Snijders.

The eagle on Snijders’ painting is a white-tailed eagle. A bluethroat is depicted as well (after over three centuries, the colour blue on the painting has faded; like with the kingfisher and the jay as well).

A partridge is depicted on a tree. Nico de Haan said 2013 will be the Year of the Partridge in the Netherlands. He said that in nature, partridges will not sit on a tree, like in the painting. Also, the bird species in the painting would not come together in reality.

According to De Haan, it was not so clear which owl species Snijders’ depicted as “conductor”. A long-eared owl?

The birds in the concert do not seem to really like the “conductor”. De Haan joked that, if you transplant the painting to Dutch politics of today, the owl looks like Henk Bleeker, minister in the recently broken-up Rightist Dutch government. Owl “Bleeker” reads out his awful anti-wildlife plans, and the other birds boo him for that.

On the right in the painting, two bitterns. A Bewick’s swan. A female marsh harrier.

In the upper left corner, a woodcock. Next to it, a golden oriole. Its colour has faded after centuries. And a jackdaw.

A grey heron and the painting’s only mammal, a bat.

From South America, a toucan of undetermined species. A blue-fronted amazon parrot. And a red-and-green macaw.

From Asia, a male and a female peacock.

Outside the museum, in a canal, three mute swan cygnets swim with their parents.