This June 2018 video from the USA says about itself:

Las Vegas homeless areas only 5 minutes away from downtown. Tent city, camp. See the other side of fabulous Las Vegas where tourists do not go.

A commenter on this video says:

I was there. In that position. I lost my job because of medical issues. My wife and I lived off of her paycheck while I went through surgeries. I was in need of two more surgeries when my wife was tragically killed while crossing a street in a marked crosswalk in March of 2017.

I depleted our savings paying rent and utilities. I had my second to last surgery in August 2017. Then got evicted the next month. Just one week out of intensive care. Money gone.

I held a sign at the Wal-Mart on Boulder highway and Nellis. In Las Vegas. My little dog Cookie and I. I was lucky. I had something most of the others did not. I served 14 years in the Army. I had benefits. Three times a week, I pushed my paperwork through. I hounded the VA. I bought a tent, a sleeping bag, a butane camp stove and a mess kit.
I held a sign every day. Seven days a week from September 2017 until April 2018. I went on food stamps. 192 dollars a month. I don’t drink or do drugs or gamble.

The beautiful people in that area helped me. And encouraged me not to give up.

The Las Vegas Metropolitan Police Department (LVMPD) has begun enforcing anti-homeless ordinance measures passed by the Las Vegas city council this past November and January. “Bill 2019–36” was passed by a 5–2 margin over the objections of the hundreds of workers, students and activists who packed the November 6, 2019, council meeting. The ordinance further criminalizes poverty, making it illegal to sleep or camp on sidewalks or in public spaces, “if there is space available at the Courtyard Homeless Resource Center.” 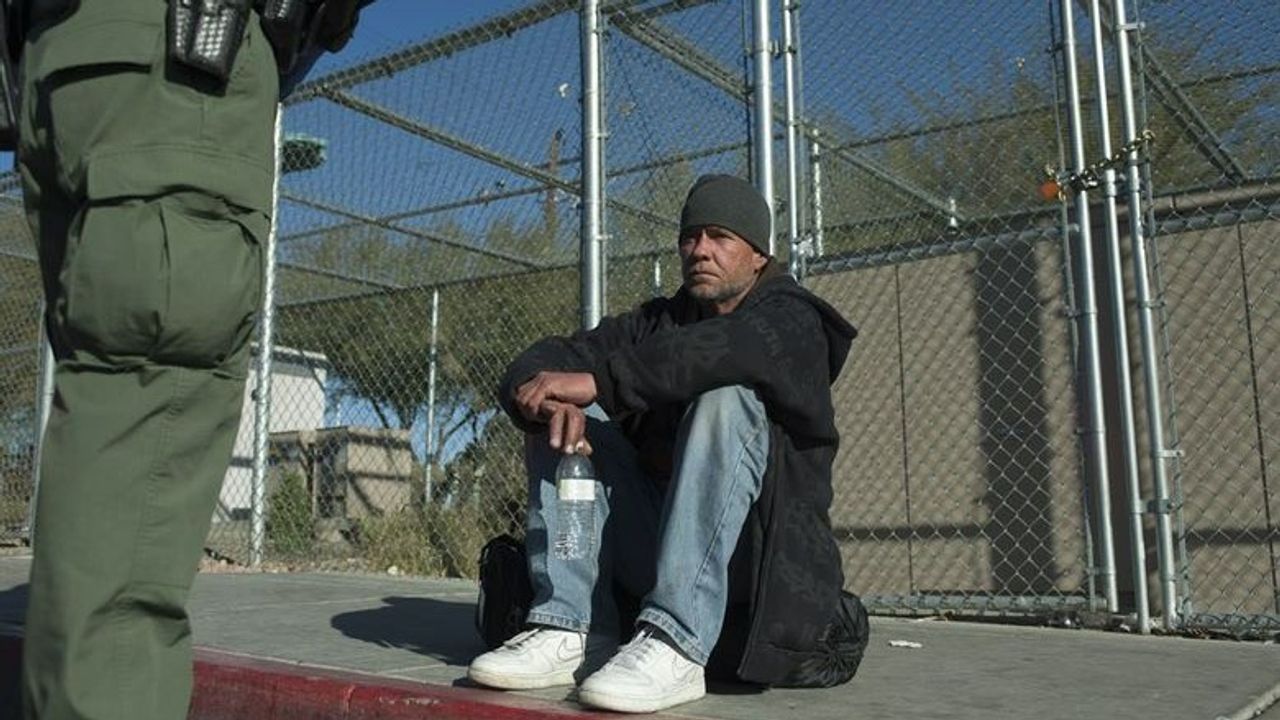 The law is a further assault on the most vulnerable in society, with punitive measures ranging from monetary fines, up to $1,000, and/or the possibility of a six-month jail sentence.

A similar ordinance passed by the city council of Boise, Idaho, was struck down by the 9th Circuit Court of Appeals in December of last year. The court ruled that it is “cruel and unusual punishment”, to issue fines to people for sleeping outdoors while not providing adequate space for those that need it.

Advocates of the law, including the LVMPD, have stressed that the ordinance is a critical “new tool” for the police to use against the homeless. Unable to organize society to meet human need, the dictates of capital demand that property values be maintained by removing the “eyesore” of the homeless who have nowhere else to sleep but on sidewalks, in doorways or on park benches.

“Sin City” is bereft of social services and affordable housing, yet the police were able to grow their budget by $30,892,504 or 5.6 percent over the 2018/19 fiscal year thanks to an increase in the regressive sales taxes passed by a compliant city council. The total budget for the department now exceeds $631 million for 2020. The new funds will allow the city to hire 82 more police officers in order to maintain a ratio of two police officers for every 1,000 residents.

The new anti-homeless ordinance first took effect without the penalty provisions on November 10, however less than two weeks before the enforcement mechanisms were to take effect on February 1, the city council passed an additional “street-cleaning ordinance” which further expands the reach of the police, allowing them to fine or imprison anyone sitting or sleeping on sidewalks or streets “during designated cleaning times”. The month-old street-cleaning ordinance does not have the same stipulation as Bill 2019–36 regarding availability at the Courtyard shelter, meaning that even if there is no space available a person can be cited or jailed.

The city-funded Courtyard Homeless Resource Center, the only 24-hour, 7-day-a-week shelter in the city, has current capacity of 450 and is a chain-linked ghetto within the sardonically named “Corridor of Hope”. Next to the courtyard is the CARE Complex, a non-profit center that provides secure lockers and various services to those that stay in the Courtyard such as helping them to acquire an identification card.

CARE Complex President Michael Swecker recently spoke to NBC 3 regarding the current state of the Courtyard. “It’s a scary place and it’s not any place you would bring a child,” Swecker noted. He advised that “single women should not stay there overnight.” He concluded the interview with the hope that with additional funding the Courtyard would “become a more humane place.” The city of Las Vegas is currently in the midst of a $20 million “upgrade” to the facilities with the stated goal of increasing the capacity to 800 by 2021. As of right now, in total, the city only offers 1,300 shelter beds for those without a home to sleep on.

Those who stay in the facility are provided with a roughly six-inch thick rubber mattress on which to lay. The sleeping area is a concrete slab where the blue mats are arranged in compact columns and rows with roughly one foot separating them, similar to an ICE detention facility or concentration camp. While there is a roof overhead the Courtyard is not an enclosed space.

No bedding is provided and those with pets must keep them locked in separate pens. “Residents” are provided one black plastic tote in which to store all of their possessions and are provided one bottle of water a day to drink. Twelve portable toilets are located within the Courtyard for the roughly 300 to 500 people that filter in and out of the facility daily.

Mayor Carolyn Goodman has faced increasing criticism from residents over the Dickensian legislation implemented under her direction and at urging of the local business community which is dominated by large casino operators. In her state of the city address Goodman defended the law, stating, “I will not allow the city of Las Vegas to become a skid-row harbor of rampant crime and potential pandemic disease.” In interviews following her address Goodman expressed her desire that the new ordinances will become “a model that can be replicated elsewhere in Nevada and hopefully elsewhere in the country.”

There have been several protests and demonstrations against the law since its passage and up until the beginning of its enforcement. On Martin Luther King Jr. Day, roughly 50 people staged a march from City Hall to the Fremont Street tourist district in a demonstration dubbed “Occupy Fremont”.

Protesters carried signs reading “Homes Not Handcuffs, No to the Camping Ban.” Once they arrived at the tourist district they were quickly surrounded by horse-mounted police. A few protesters pitched small camping tents while the rest formed a circle around the tents. After ordering the group to disperse, the police moved swiftly on the few dozen left and within twenty minutes twelve protesters were arrested with one reported injury.

After the demonstration, the former Democrat and now independent Mayor Goodman took to the airwaves to denounce the protesters as outside agitators and “paid protesters”, who were “reading a script from a cell phone.” This was quickly rebutted by homeless advocate Katie Krikorian of the nonprofit group “Food not Bombs”, who was one of the twelve arrested. Rebutting the mayor’s baseless slander in a telephone interview, Krikorian stated, “I was arrested protesting against homelessness on the Occupy Fremont Street event. I am a resident. I’m a homeowner, and if you’d like to see me, I will be out there tonight.”

The mayor has tried to frame the new laws as her “getting something done” while demonstrating “compassion”, arguing that laws are there to “help those who want to help themselves” while providing an avenue “to get services to those that need it.” The truth is that neither of the new ordinances provide new funding for sanitation, housing or transportation to the nearly 14,000 chronically homeless in southwest Nevada or the over 6,500 without permanent housing within the city limits.

While the law has been in effect for two weeks, the police and City Hall have maintained that no one has been fined or arrested yet under the new guidelines, and according to various press reports, they have been given directives not to enforce the punitive measures for another week.

However, a cellphone video shot on February 11 by Krikorian casts serious doubts on the police and City Hall claims that they haven’t already begun to levy fines and detain “violators”. In the early morning video, a woman can be seen bent over the hood of a Las Vegas police sport utility vehicle with her hands cuffed behind her back. As Krikorian approached the vehicle, filming the entire time and inquiring as to the reason for the woman’s detention, the police quickly released her.

The briefly-detained woman produced to Krikorian a pink citation slip which stated it was for violating the street-cleaning ordinance, with an accompanying $1,000 fine.

According to Krikorian, there were no street-cleaning vehicles present and no signage posted indicating when street-cleaning crews were supposed to be present, as mandated by the new law. Police disputed this account, without saying what the person was cited for nor how much the citation was. The police went on to explain that the reason the woman was handcuffed was because she “refused to sign the citation.”

In anticipation of the Nevada caucuses on February 22, this past Saturday the Clark County Democratic Party hosted a “Kick off to the Caucus” gala which featured speeches from the candidates at the Tropicana Casino and Resort in Las Vegas. The event boasted a VIP reception, along with dinner and speeches from the candidates including billionaire Tom Steyer, former Vice President Joe Biden, Senators Bernie Sanders, Elizabeth Warren and Amy Klobuchar, and former South Bend, Indiana, Mayor Pete Buttigieg. Tickets for the event started at $125 and reached up to $2,500.