This photo shows Colombian students protesting, with a sign saying that the right-wing government is killing education.

Colombians have taken to the streets en masse out of dissatisfaction with the government policy of conservative president Iván Duque. Police estimate that 207,000 people were on the move throughout the country, in one of the biggest protests in the recent history of the South American country.

Groups of, eg, students, trade unions, indigenous people and teachers, protested against a range of problems, from socio-economic inequality to violence against activists. …

Here and there were small confrontations between riot police and demonstrators. For example, tear gas was used when protesters wanted to march to Bogotá airport.

President Duque only enjoys the support of a quarter of Colombians, research shows. …

Unemployment is 11 percent and 17.5 percent of young people are unemployed. With the launching of a national strike Thursday, hundreds of thousands of Colombian workers joined the eruption of class struggle that has shaken Latin America over the past several months. Following the mass demonstrations and strikes in Chile, the eruption of social protest in Ecuador and the resistance of Bolivian workers and peasants to the US-backed right-wing military coup, Colombian workers have shut down the fourth largest economy in Latin America.

While exact crowd sizes are hard to determine, estimates have ranged from 200,000 to over 1,000,000 people participating nationwide. Over 100,000 marched in the rain through the capital of Bogotá, filling the streets and closing 130 Transmilenio bus stations. At least 20,000 marched in Cali, and tens of thousands more participated in over 100 cities and towns across Colombia. Solidarity protests were held in numerous cities internationally, including Paris, London, Buenos Aires, Munich, New York, Sydney, Madrid, Miami and San Francisco.

Dozens of organizations took part in the strike, primarily the various trade unions, indigenous rights groups and student organizations. In every major city, protesters blocked public transportation to varying degrees, shutting down large sections of transportation throughout the country.

Thousands of protesters filled Plaza Bolívar in Bogotá, the main square of the capital. Referencing the state violence unleashed against protesters in Chile, where hundreds have lost their eyes after being shot by rubber bullets, a large banner draped across a side of the square read, “How many eyes will it cost us to open theirs?”

Underscoring the significance of the strike, Oren Barack of Alliance Global Partners in New York, which holds Colombian sovereign and corporate debt, told Bloomberg, “I’m following it pretty closely. The government has something to be nervous about.” 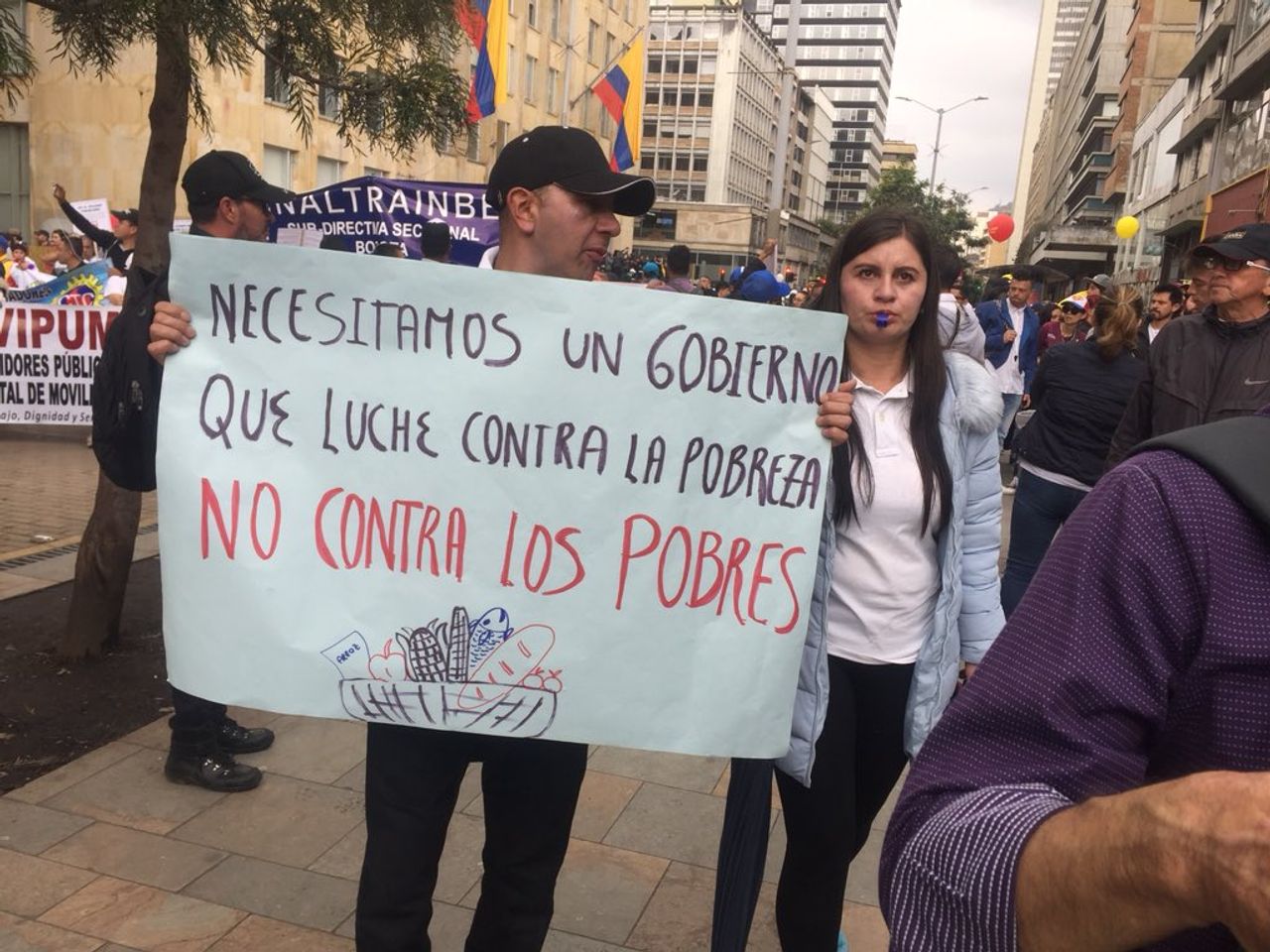 While the protests remained overwhelmingly peaceful, minor clashes between protesters and units of the Mobile Anti-Disturbances Squadron (ESMAD) took place in some major cities during the day, leading to the arrest of ten protesters by mid-day. Altercations in Bogotá and the western city of Cali injured seven protesters … prompting the imposition of a 7pm curfew in Cali. As of this writing, some clashes have broken out between police and protesters defying the curfew.

Despite efforts by demonstrators to keep the protest peaceful, a confrontation took place in the afternoon between protesters and the ESMAD on Plaza Bolívar in Bogotá, prompting the militarized riot police to fire tear gas to disperse the crowd.

In the evening, thousands of people took to the streets in cacerolazos —banging pots and pans—in Medellín and Bogotá, protesting the police violence.

In the days leading up to the strike, the Colombian state mobilized its vast police and military apparatus, the second largest in the region after Brazil. The commander of the Colombian armed forces, General Luis Fernando Navarro, ordered the quartering of all of the country’s 293,200 soldiers beginning Monday and lasting through the national strike, commanding them to be on “maximum alert status.” 8,000 soldiers were deployed to Bogotá, Medellín, Cali, Barranquilla, Cartagena, Bucaramanga, Pereira and Pasto.

In addition, 10,000 local police were deployed in Bogotá and 7,000 in Medellín, Colombia’s second-largest city, with thousands more in other cities. President Iván Duque issued a decree enabling local authorities to impose curfews and ban the carrying of arms and consumption of alcohol.

In an effort to whip up xenophobia, the government deported 24 Venezuelan nationals, as well as Spanish and Chilean nationals, whom they accused of “affecting public order and national security.” In addition, Duque ordered the closing of Colombia’s borders from midnight Wednesday until 5:00am Friday.

Twenty-seven raids were conducted by the National Police in Bogotá on Tuesday morning, searching the offices and homes of leaders of organizations involved with the strike. In a nationally televised public address on Wednesday, Duque warned that his government “will guarantee order and defend you with all the tools the constitution grants us.”

The underlying objective impulse for the national strike is the deep economic inequality that pervades Colombian society. With three billionaires owning more wealth than the bottom ten percent of the population, Colombia ranks among the most unequal countries in Latin America, the most unequal region in the world. Unemployment has risen under the Duque administration, as more than 600,000 people lost their jobs last year alone.

The right-wing policies of the Duque administration, which has been a dutiful servant to the Colombian bourgeoisie and foreign capital since coming to power in August 2018, have exacerbated this situation and created immense hostility to the existing political setup. The most recent opinion polls before the strike showed Duque’s approval ratings at a dismal 26 percent.

Duque has violated nearly every statute of the fraudulent 2016 peace accords negotiated with the Revolutionary Armed Forces of Colombia (FARC) guerrilla movement and has branded anyone who supports the peace accords as a guerrilla sympathizer. Duque has waged this campaign in alliance with his mentor, former president Álvaro Uribe, who during his reign from 2002-2010 vastly expanded the military and relied upon paramilitary death squads to wage war against FARC.

The repeated treaty violations led a section of the FARC to resume the bloody, decades-long civil war with the government at the end of August. Since it began in 1964, the Colombian conflict has led to the killing of over 177,000 civilians by both the military and the guerrilla fighters, and is the longest armed conflict in the Western Hemisphere.

In late September, student protests erupted in response to revelations of corruption within the District University administration involving the embezzlement of over COP$10,400 million (roughly US$3 million). When the ESMAD violently suppressed the protests, students began organizing weekly protests and marches throughout Colombia, repeatedly clashing with police.

Also in September, the Supreme Court began hearing witnesses in the trial of Uribe, who has been accused of fraud and bribery to cover up his family’s past crimes. With Uribe’s record largely destroyed by this testimony, his far-right Democratic Center (CD) party lost significant ground in local elections held on October 27. 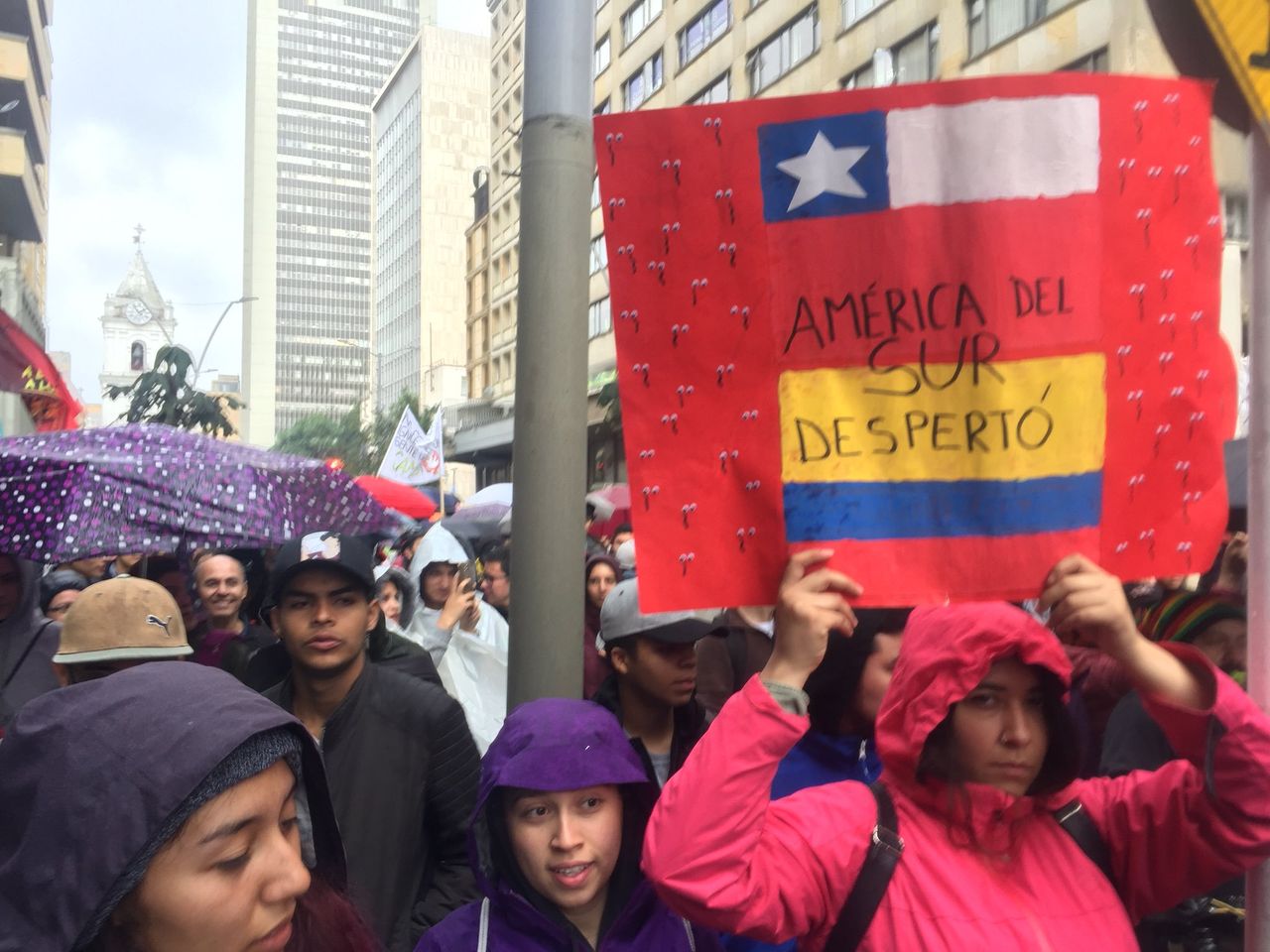 First announced by the country’s main trade unions on October 4, the national strike was initially ignored by the corporate media. The protests first centered on opposition to government plans for an austerity package to undermine the state-run pension program Colpensiones, reduce the minimum wage for minors, decrease education spending and cut taxes for the rich.

A tipping point occurred on November 5, when it was revealed that the state had covered up the fact that an August 29 military bombing had killed at least eight children in Caquetá, which it claimed was a FARC stronghold, leading to the resignation of Colombian Defense Minister Guillermo Botero. The revelation that the Colombian military had committed yet another war crime against its own population prompted students and indigenous groups to join the call for a national strike, shifting the central demand to the ouster of Duque. Since then, reports have surfaced that up to 18 children were killed, more than double the government’s count, further fueling social tensions.