This 9 September 2019 video from the USA says about itself:

Those seeking refugee status in the United States at the US-Mexico border are now forced to remain in Mexico while their refugee status is being processed. Laura Carlsen spoke to refugees and advocates on the Mexican side, in Tijuana.

A leaked Federal Bureau of Investigation (FBI) intelligence report reveals that the US government is using informants and trawling social media to spy on domestic left-wing protest groups opposed to fascist border militias and the Trump administration’s attack on immigrants.

The document, titled “Anarchist Extremists Very Likely Increasing Targeting of US Government Entities in Arizona, Increasing Risk of Armed Conflict,” produced by the FBI’s Phoenix office, was published on September 4 by Yahoo News.

The report exposes unconstitutional activity that parallels the crimes of the FBI under former Director J. Edgar Hoover. It is a serious warning sign: the military-intelligence apparatus is covertly creating the legal and physical framework for the criminalization of free speech and the suppression of left-wing political activity. As the fascist in the White House establishes concentration camps for immigrants and political opponents, a bipartisan group of politicians and intelligence agents are working to crush dissent.

The report explains that the FBI is targeting “anarchist extremists” (which it refers to as “AEs”) because they “view US immigration policies and procedures for handling illegal immigrants—including arrests, removal, and border barriers—as violations of human rights and supporting government facilities and personnel as symbols of US tyranny.” 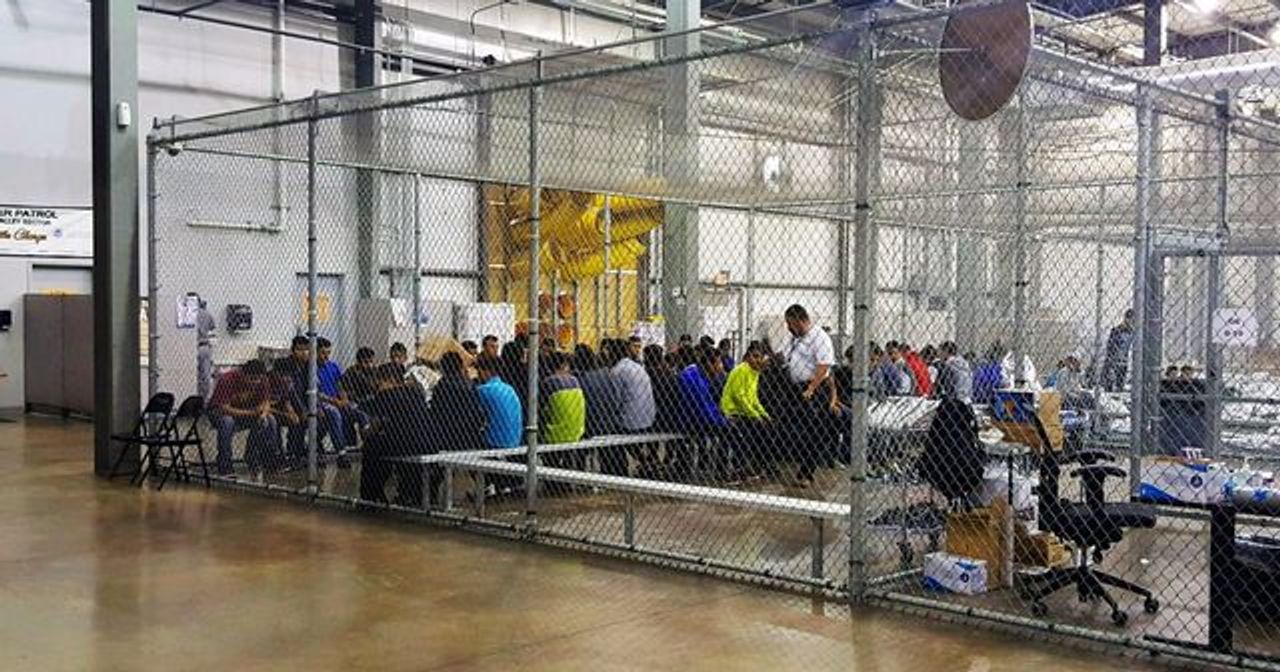 The FBI justifies labeling groups as “extremists” based on the fact that they are “monitoring various US Border Patrol activities, right-wing militia groups, and other groups favoring the border wall, mostly to expose human rights abuses and communicate threats to humanitarian groups operating in the area.”

The use of terminology is legally significant: groups opposing fascists are “extremists” while fascists are merely listed as “right-wing groups”. The FBI is effectively serving as the fascist militias’ protectors.

The report explains that the FBI has gathered information from “human and open source reporting with varying access and reliability, the majority having direct access.” Translated into plain English, the FBI is trawling websites and personal social media pages for “open source” gathering while working with “human” informants or infiltrating agents with “direct access” to the targeted groups and individuals.

The report exposes the antidemocratic nomenclature and legal categories employed by the intelligence agencies in their investigations of left-wing opposition.

The FBI reviewed “extremist websites”, including one “AE website” which advocates “disruptive actions” against Customs and Border Protection (CBP) and Immigration and Customs Enforcement (ICE). The FBI referenced another “extremist website” on the grounds that it advocates “a trajectory of rebellion.” One individual was targeted for social media surveillance because he was “a self-identified antifascist” who had “expressed support” for “AEs.”

The FBI admits that “the majority of AEs do not further their goals with firearms” and that “AE groups have banned firearms or carrying loaded weapons.” In other words, the groups are targeted despite having explicitly renounced violent behavior.

The FBI report is one small but dangerous part of a broader effort to criminalize left-wing social opposition under the auspices of combatting “domestic terrorism.”

In August, President Trump tweeted that “Major consideration is being given to naming ANTIFA an ‘organization of terror.’”

The intelligence agencies and a bipartisan network of politicians and officials have indeed been giving “major consideration” to labeling domestic groups as “terrorists.”

In its 2018 National Strategy for Counterterrorism document, the Trump administration added several sections addressing “domestic terrorism” for the first time.

The document pledged to “investigate and integrate threat information relating to domestic terrorists,” noting “the US has long faced a persistent security threat from domestic terrorists who are not motivated by a radical Islamist ideology.” Further, the administration pledged to “raise awareness of radicalization and recruitment dynamics” and to “promote grassroots efforts to identify and address radicalization to insulate civilian populations from terrorist influence.”

In a statement published in May 2019 supporting legislation making “domestic terrorism” a federal crime, FBI Assistant Director of the Counterterrorism Division Michael McGarrity wrote that “domestic terrorists” act “in furtherance of ideological goals stemming from domestic influences, such as racial bias and anti-government sentiment.”

McGarrity added that the FBI is collaborating with foreign intelligence agencies to monitor international political activity: “We are working with our foreign partners to investigate subjects in their countries who may be radicalizing Americans…”

Earlier this summer, Democratic Congressman Adam Schiff introduced legislation that would create a federal law barring support for individuals or groups labeled “domestic terrorists”. Though Schiff and the Democrats claim the legislation would be aimed at right-wing mass shooters, violent terrorist acts are already illegal in every jurisdiction, meaning the chief purpose of such a federal law would be to criminalize free speech and association, particularly on the left.

Robert Chesney, the cofounder of Lawfare Blog and a former Obama administration lawyer, explained on August 8 that a federal domestic terrorism statute would be “useful” to criminalize noncriminal speech and activity.

Speaking in support of the measure, he wrote that a domestic terrorism law would facilitate “anticipatory prosecutions of persons whom the government thinks are personally dangerous but cannot yet be linked to particular conspiracies, attempts or completed acts of violence.” Chesney notes that “what is missing in the domestic terrorism scenario” is “a list of proscribed organizations to which it becomes a crime to provide, knowingly, any form of support.” “Active membership” in such a group would make an individual a “domestic terrorist.”

One key architect of the clandestine plans to create the legal framework for crackdowns on free speech is former Obama administration Acting Assistant Attorney General for National Security Mary McCord.

On February 27, McCord authored a Lawfare article titled “A Road Map for Congress to Address Domestic Terrorism” with Jason Blazakis, the former State Department Director of the Counterterrorism Finance and Designations Office, the agency responsible for determining which groups are listed as “foreign terrorist organizations” under the PATRIOT Act.

The article advocates for passage of a domestic terrorism statute in order to mobilize the FBI’s “Joint Terrorism Task Forces (JTTFs)” which function “in 104 cities across the country, combining over 4,000 federal, state and local law enforcement and intelligence specialists,” to address domestic terrorism. McCord and Blazakis say “domestic terrorism” involves acts that are “motivated by political, economic and social extremist ideologies,” a definition that is clearly aimed at encompassing socialist, antiwar and left-wing viewpoints.

The New York Times interviewed McCord, writing on August 9 that she “argued that having domestic terrorism and related weapons-stockpiling charges on the books would give the FBI a stronger basis to investigate people who arouse suspicion that they may pose a risk of politically motivated violence, including by sending informants to see what such suspects say privately.”

The state’s plans for repressing social opposition include threats of physical force. Also on August 9, internet censorship advocate Clint Watts wrote an opinion article in the Wall Street Journal titled, “How to Fight the New Domestic Terrorism” which calls for the government to “use its hard-won experience against al Qaeda and Islamic State [ISIS]” to combat “domestic terrorism.”

“We must swiftly and carefully apply the best practices of the two decades since Sept. 11, 2001 to counter this decade’s domestic terrorist threat—by passing new laws, increasing resources and enhancing investigative capabilities,” Watts writes.

This is an admission that the ruling class—with bipartisan support—is preparing to employ at home the brutal forces of death and repression used against workers and peasants in Iraq, Afghanistan, Syria, Yemen and Libya. The aim is to suppress the growth of social opposition and defend skyrocketing levels of social inequality.

The targeting of pro-immigrant groups by the FBI in Arizona shows the intelligence agencies are not primarily concerned with white supremacists. Trump, who has referred to neo-Nazis as “good people”, is clearly not directing this strategy against his allies on the extreme right. After all, one of the chief aides of the president—Stephen Miller—is himself a fascist extremist, and he is effectively running DHS.

The real target is the working class, which must be mobilized against the threat of fascism and dictatorship.

10 thoughts on “Trump’s FBI spying on opponents of xenophobia”