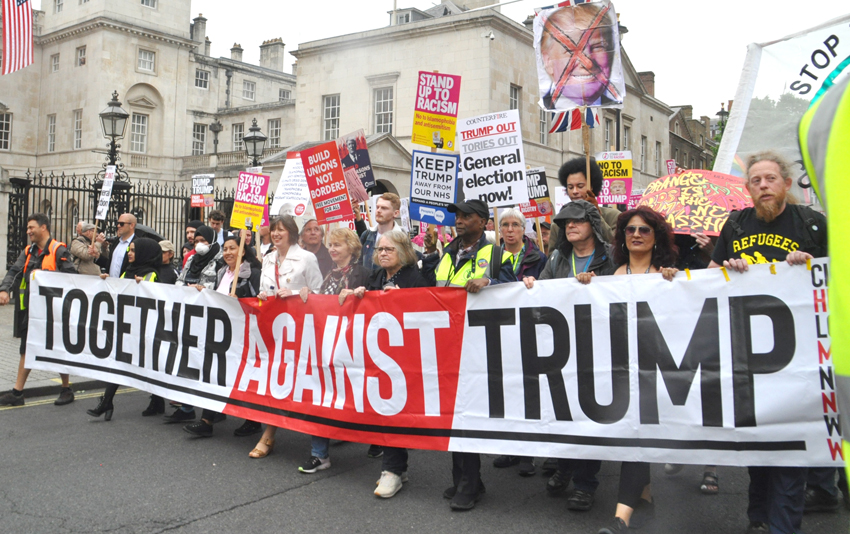 ‘Our NHS is not for sale to the US!’ – Corbyn tells anti-Trump rally

‘THIS SHOULD not be a debate about how we go forward with a no deal Brexit and at the same time offering up our precious, wonderful National Health Service to private American companies to come in and take it over’, Labour leader Jeremy Corbyn said addressing the mass rally in Whitehall yesterday to protest against US President Trump’s state visit to the UK.

He was answering the US Ambassador to London who insisted the NHS should be ‘on the table’ in any US/UK future trade deal.

Corbyn declared: ‘We will not stand for that and we will strive with every last breath in our body to defend the principle of a health care system free at the point of need for everyone as a basic human right.’

There were dozens of demonstrations in towns and cities around the country, with organisers estimating 75,000 protesters turning out.

On the war of words between Trump and London Mayor Khan, Corbyn said: ‘I am very disappointed today, on the wonderful festival of Eid, that our Mayor of London, Sadiq Khan, has been attacked in the way that he has. I am proud that our City has a Muslim mayor, that we can chase down Islamophobia, anti-Semitism – any form of racism in our society.’

Meanwhile, Trump gave a joint press conference with the soon-to-be ex-Tory PM May.

May used her speech to launch an attack on Iran: ‘Today we discussed again the importance of our two nations working together to address Iran’s destabilising activity in the region and to ensure Tehran cannot acquire a nuclear weapon.

‘Although we differ on the means on achieving that, as I have said before the UK continues to stand by the nuclear deal, it is clear that we both want to reach the same goal.’

Trump said: ‘Today the Prime Minister and I discussed our thriving economic relationship. Both countries are doing very well and participated in a round table with industry and business leaders. I can say, probably the biggest business leaders anywhere in the world.’

Asked by a journalist: ‘As you hold talks with the current Prime Minister, the leader of Her Majesty’s Opposition has been addressing a protest rally against your visit in Trafalgar Square. He says that he is disappointed that you attacked the London Mayor, and criticised your record on refugees. What have you to say to him? And is this someone you could do a trade deal with?’

He was then asked: ‘Do you agree with your Ambassador that the entire economy needs to be on the table in a future trade deal including the NHS?’

May refused to rule out a fire sale of the NHS to US health companies, replying: ‘The point about making trade deals, is of course that both sides negotiate and come to an agreement about what should or should not be in that trade deal for the future.’

3 thoughts on “No to Donald Trump in London, England”