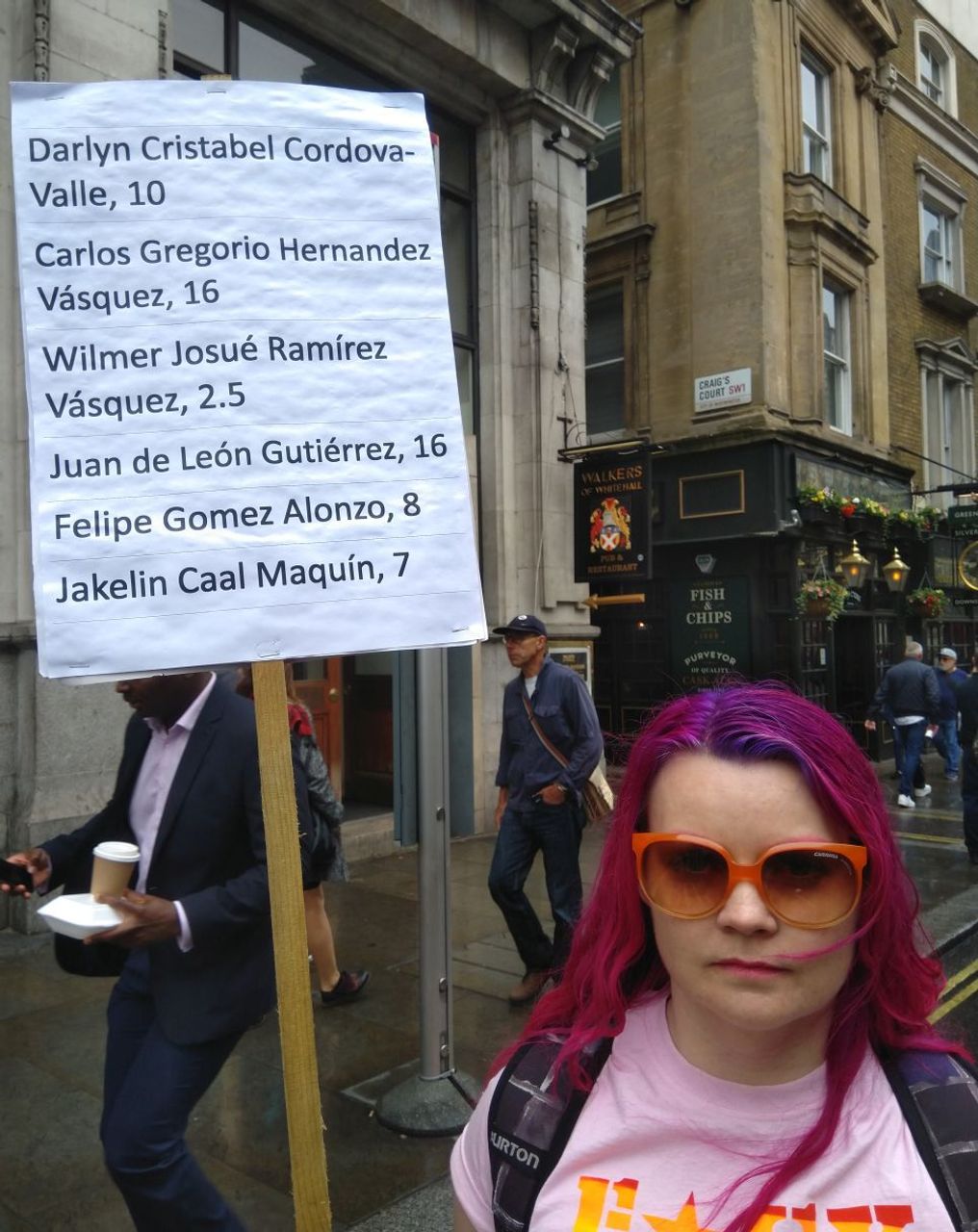 Protesters speak out at London demonstration against Trump

WSWS reporters spoke to some of those who attended Tuesday’s protests in London against US President Donald Trump.

Rachel, a student who lives in London but originates from Chula Vista, California, said, “The banner I am carrying has the names of the children who have died whilst being detained by the US, to remind people that there are still children separated from their parents in the US, and they’re not in great conditions. So, it’s still happening.

“They need to stop separating families. That hasn’t been done before. No child had died while being detained in the previous 10 years, but these ones are all just in the last 12 months.

“Trump is using his power for his own benefits, and he’s trying to please other people that think that immigrants are the main problem in the country, and it’s not true.

“It’s a big misconception that immigrants are taking jobs away from Americans, and that they’re what’s wrong with the country and it’s not true.”

Asked what she thought about the need for socialism, she said, “Yeah, I’m for it.”

Barbara, from Bromley, said, “I have come here today to protest against Trump because he’s everything I don’t want anyone to be. He’s a racist. He’s a bigot. He’s got no respect for women, and I can’t believe he’s the President of the United States of America, and for our government to roll out the red carpet is disgusting.” 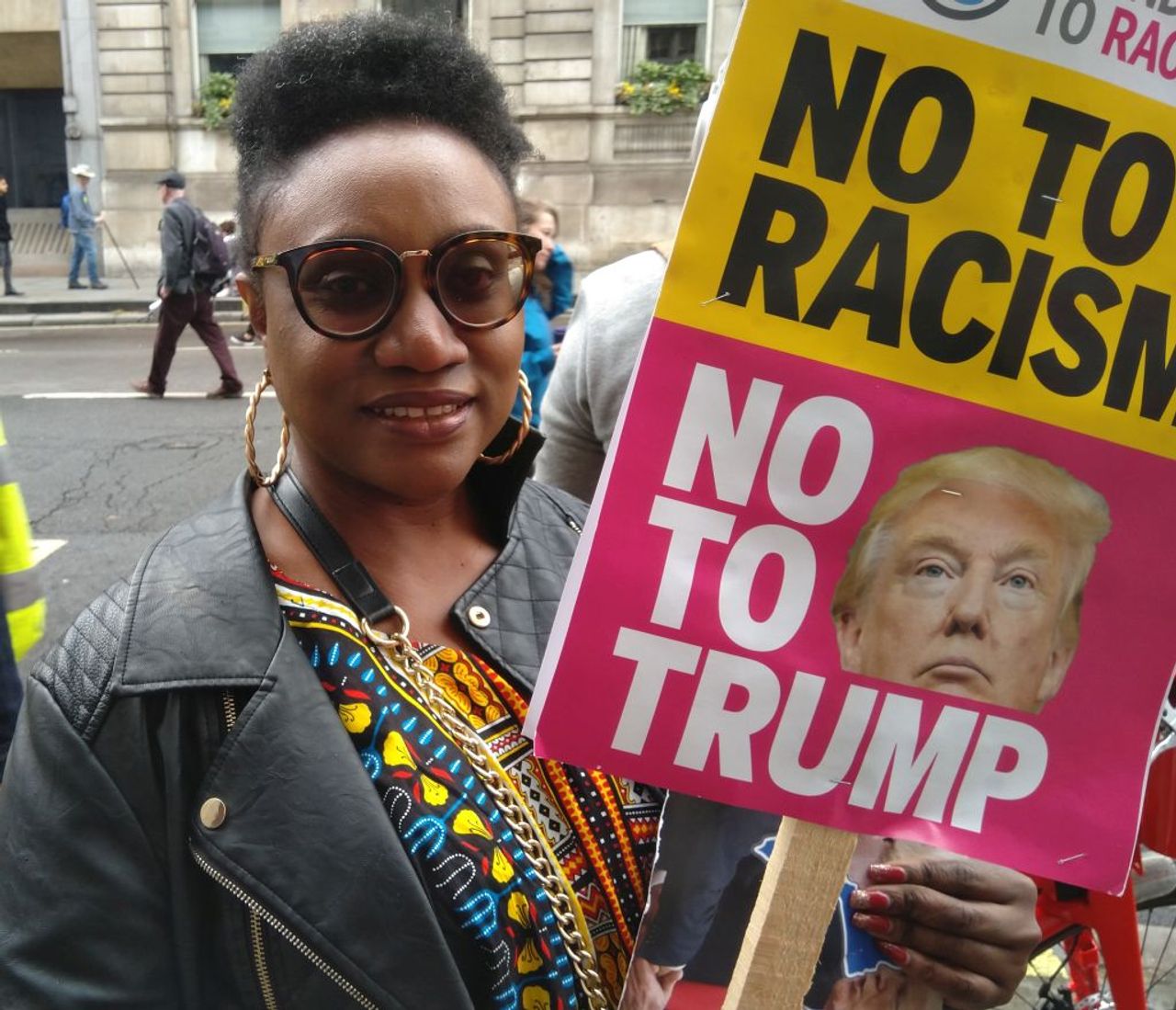 Asked about the case of WikiLeaks founder Julian Assange and American whistleblower Chelsea Manning, who are both being persecuted by US and British imperialism for exposing their war crimes and imperialist intrigues, she said, “I am against injustice, and wherever it is, I stand against injustice.

“I think that it’s an injustice against reporters to be honest. They’re trying to suppress the press, and that’s not what we stand for. I don’t know how they got their information and put it out there, but I don’t think they should be penalised for that.”

Madi is an American student who travelled down from Edinburgh. She said, “I feel I have a responsibility to speak out against Donald Trump and his policies. He is incredibly bigoted, racist and homophobic.

“I think demonstrations like this are important for showing that the people are angry and upset, so that hopefully we will get him voted out in 2020. 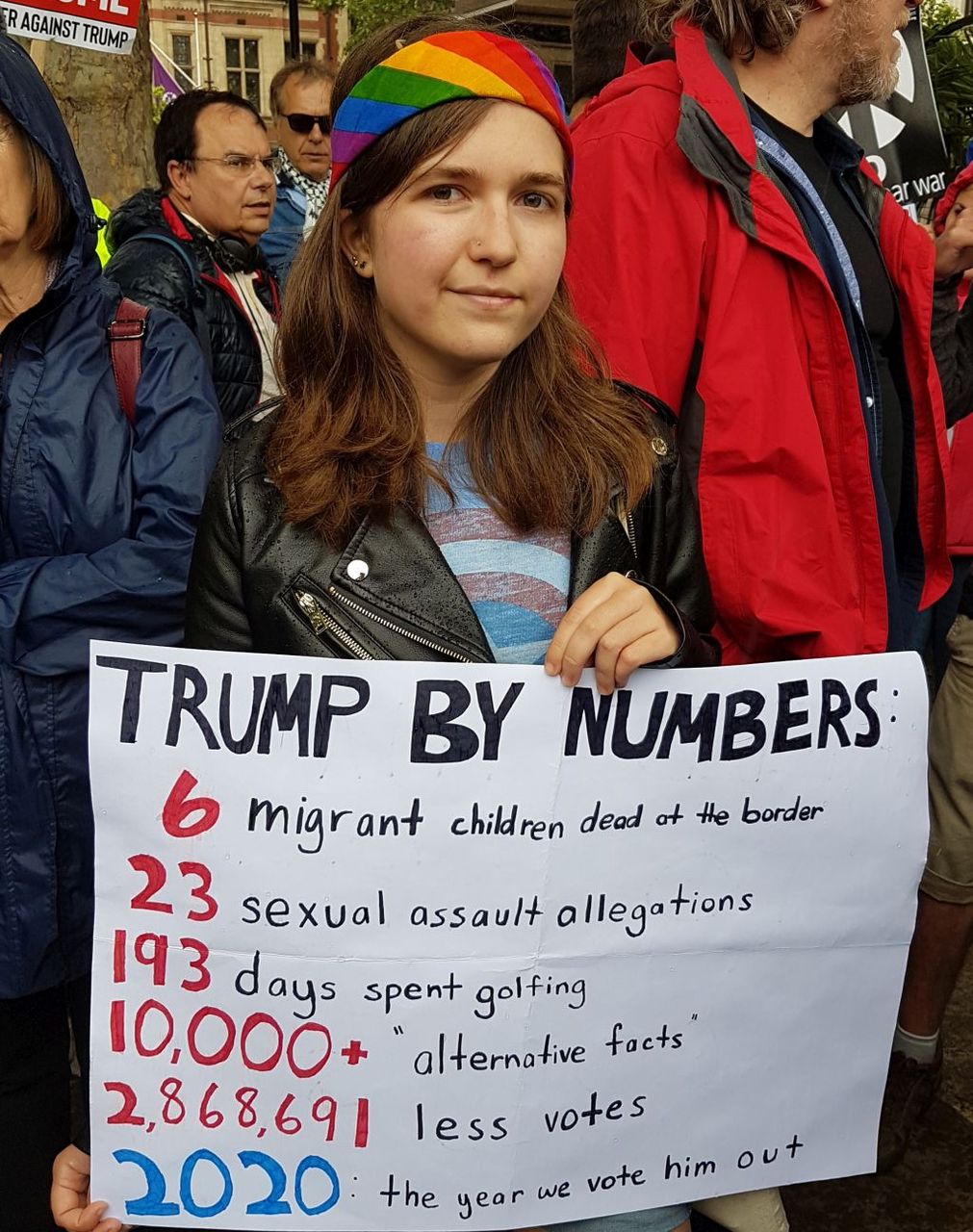 “Trump ran his [2016] campaign on fear and hate. But the people in the middle states where there are many workers felt that no one was helping them. I’m from Wisconsin, which used to be a blue (Democratic Party) state. I also protested against Republican Governor Scott Walker, and I’m glad we got him out.

“It was very disheartening on election night when Trump was elected, as Wisconsin had almost always voted blue. I had supported [Democrat Bernie] Sanders in the primary.

“There are a lot of people who aren’t being represented in the two-party system, and that is something that should change.”

Asked about her banner, she said one of the figures she quotes is about immigration, because “There is a crisis on the border, and six children have died in US custody. That is completely unacceptable.”

Vanessa had travelled to the demonstration from Worcestershire despite a health issue. She explained she has suffered with body dysmorphia and severe anxiety and had been asking for help since she was 13.

“That’s a long time. I’ve had the diagnosis on the National Health Service [NHS], but I’m being sent from one service to another, because they’re all saying, you’ve got to get the other things treated before they can treat you. So, I’m left with no treatment. And it’s severe, suicidal. Coming out today, for me suffering from anxiety disorder, is huge. 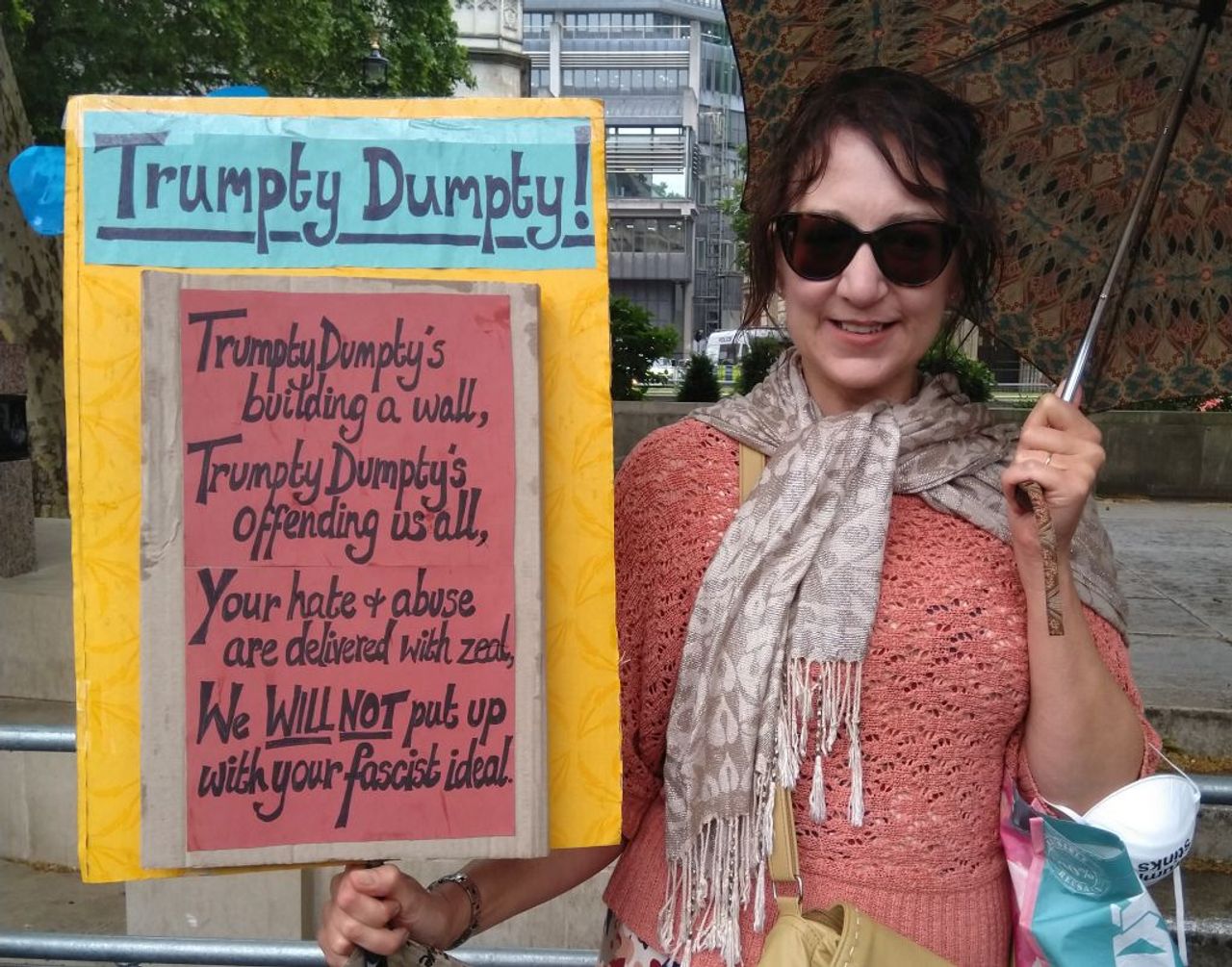 She said the fact that Trump had said that the NHS would be “on the table” in any post-Brexit trade deal was “worrying, really worrying, because it’s bad enough now, particularly with mental health services. We’re going to have no chance at all for ordinary people accessing any help. It’s all a big worry. It’s not the society I envisaged when I get older.”

Vanessa said the rise of Donald Trump was “so like the rise of Hitler. It’s scary how people dismissed Hitler, thought he was just a joke, like they did with Trump, and then overnight they’re in power. And the racism and what I would call fascism, the hatred, the xenophobia, the jingoism, it’s all far too much like what happened in the 1920s and 30s.

“It worries me that we’re just moving more and more to a polarised global society between the rich and poor.”

Vanessa agreed that there was no one in the mainstream parties who represented the interests of the working class, because “they all come from the same background. They’ve all been to the same schools. They go to the same colleges at Oxford and Cambridge. We’re talking about an elite group of people here. They’ve never worked in an ordinary job where you don’t get sick pay, where you get a minimum wage. They’re multimillionaires, and how can they ever understand how it is for ordinary people? These people who are in this elite group in politics, across the board, Labour, Conservative, … the whole lot, they are totally out of touch, and it’s getting worse than it was in 2010. So, that’s where socialism needs to come in.”