This 11 April 2019 video by United States Congresswoman from Hawaii and one of the Democratic party presidential election candidates, Tulsi Gabbard, says about itself:

Wikileaks/Assange. Be quiet or else

WHAT ASSANGE’S ARREST MEANS FOR PRESS FREEDOM U.S. prosecutors’ indictment of WikiLeaks founder Julian Assange could trigger a protracted fight over press freedom in the United States, warn First Amendment experts. If Assange is convicted based on the indictment alleging he assisted Chelsea Manning in cracking a Defense Department computer password, it may give the government a dangerous precedent to use against journalists in the future. [HuffPost]

‘Assange’s critics may cheer, but this is a dark moment for press freedom’ (quoted from Daily Mirror, Sri Lanka, Friday, April 12, 2019).

Outrage is mounting after the arrest Thursday morning of journalist and WikiLeaks publisher Julian Assange at the Ecuadorian embassy in London. Assange was dragged from the embassy by a mob of British police officers and thrown into a jail cell after his political asylum was illegally cancelled by Ecuadorian President Lenin Moreno.

After nearly seven years of confinement to the embassy Assange now faces the possibility of a year in a UK prison and extradition to the US. The United Nations Special Rapporteur on extra-judicial executions, Agnes Callamard, warned that the move to expel Assange and his possible extradition to the United States put him at risk of “serious human rights violations”.

Protests called by the Socialist Equality Party in Assange’s home country of Australia were attended by hundreds of people in Sydney and Melbourne to denounce Assange’s arrest and demand his freedom. The Socialist Equality Party’s rallies were live-streamed via Facebook, and had been watched by thousands of people within hours. A protest was also held outside the British embassy in Washington, D.C.

This video is about Free Assange protest in Australia.

Ben Wizner, director of the American Civil Liberties Union’s Speech, Privacy, and Technology Project, cautioned that, “Any prosecution by the United States of Mr. Assange for WikiLeaks’ publishing operations would be unprecedented and unconstitutional, and would open the door to criminal investigations of other news organizations. Moreover, prosecuting a foreign publisher for violating U.S. secrecy laws would set an especially dangerous precedent for U.S. journalists, who routinely violate foreign secrecy laws to deliver information vital to the public’s interest.”

Independent American journalist Chris Hedges wrote that the publisher’s arrest “eviscerates all pretense of the rule of law and the rights of a free press.” While Australian journalist and documentarian John Pilger declared that Assange’s forced expulsion from the embassy and the Ecuadorian governments complicit were “crimes against the most basic natural justice”, and marked a warning to all journalists.

Assange was first convicted by a British magistrate judge Thursday of violating bail conditions which were set over trumped-up sexual assault allegations in Sweden, which have long since been dropped by prosecutors. His sentencing date has not yet been set.

Then, in a move which confirmed the fears that drove Assange to seek refuge in the Ecuadorian embassy, his arrest on bail charges was followed by the unsealing of a criminal indictment against him by the Trump administration. The indictment was filed by prosecutors more than a year ago on March 6, 2018.

“Since 2010, we’ve warned that Julian Assange would face prosecution and extradition to the United States […] unfortunately, today, we’ve been proven right”, Assange’s lawyer, Jennifer Robinson, told reporters at a press conference after meeting with him in police custody Thursday afternoon. “I’ve just been with Mr. Assange in the police cells. He wants to thank all of his supporters for their ongoing support—and he said, ‘I told you so.’”

Assange will now have to wait in jail until May 2 for an extradition hearing which will determine if he can be flown to the United States to stand trial.

He has been charged by the US Department of Justice with conspiracy to commit computer intrusion in violation of the Computer Fraud and Abuse Act, alleging that the publisher tried, but failed to assist whistleblower Chelsea Manning in cracking a password which would have allowed her to obscure her identity when accessing secret information on a Department of Defense computer network.

The charge stems from unpublished webchat logs allegedly in the possession of the US government between Manning and an individual within WikiLeaks who went under the pseudonym “Ox” and “preassociation” which the government alleges was Assange. On the basis of the conversations in these secret logs the government claims Assange sought to enter in to a criminal conspiracy with Manning to “collaborate on the acquisition and dissemination of the classified records.”

The Electronic Frontier Foundation released a statement declaring that Assange’s indictment was “at root, an attack on the publication of leaked material and the most recent act in an almost decade-long effort to punish a whistleblower and the publisher of her leaked material… if Assange is indeed extradited, the government can issue superseding indictments. It should not do so. Leaks are a vital part of the free flow of information that is essential to our democracy. Reporting on leaked materials, including reporting on classified information, is an essential role of American journalism.”

Manning leaked a massive trove of secret information exposing US war crimes in Iraq and Afghanistan to WikiLeaks in 2010, including the infamous Collateral Murder video, which shows a helicopter gunship attack in Baghdad which killed at least 12 civilians, including 2 Reuters journalists. The documents which WikiLeaks published were published by news outlets all over the world, including the New York Times and the Guardian.

Massimo Moratti, Amnesty International’s Deputy Director for Research in Europe, released a statement demanding that the UK refuse to extradite “or send in any other manner” Assange to the United States as he confronts “a very real risk that he could face human rights violations, including detention conditions that would violate the absolute prohibition of torture and other ill-treatment and an unfair trial followed by possible execution, due to his work with WikiLeaks.”

The UK government’s assurance to the Moreno government that Assange would not be extradited to a country where he could be tortured or face the death penalty is worthless.

While the conspiracy charge could bring a maximum five-year prison sentence, it cannot be ruled out that the US government has additional indictments waiting to be unsealed once Assange is in US custody, including on espionage charges that carry the death penalty. The Obama administration ing subjected Manning to torture through solitary confinement, driving her to attempt suicide on multiple occasions.

Manning has been in jail since March 8 in Alexandria, Virginia after she refused to testify in a grand jury convened to bring trumped-up charges against Assange, including 28 days in solitary confinement. Her attorneys filed an appeal Thursday based on the unsealing of the charge against Assange, arguing that compelling her to testify would have been “duplicative of evidence already in the possession of the grand jury.” Furthermore, this proved that her continued detention was not coercive but “purely punitive” in violation of the law.

This 11 April 2019 video is called Spain: Ecuador ‘did not tell the truth’ when justifying Assange’s expulsion – Defense team. 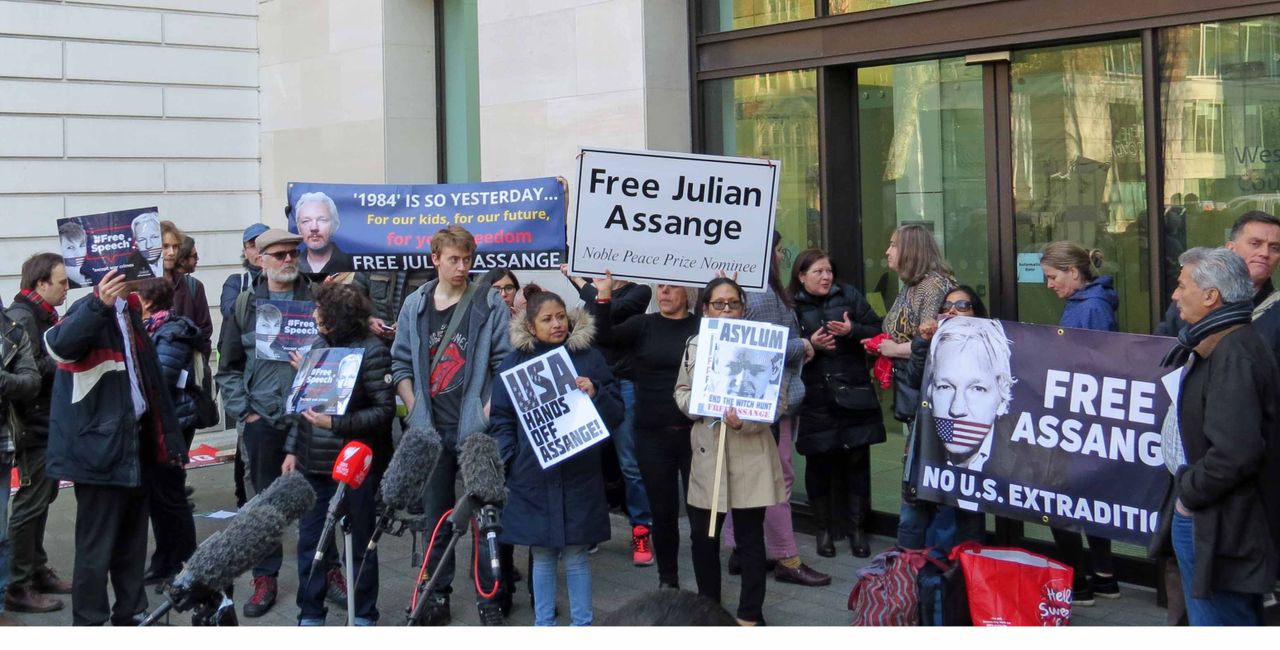 Jeremy Corbyn has said Julian Assange should not be extradited to the US following his forcible removal from the Ecuadorian embassy in London.

The Labour leader urged the UK government to oppose the attempt to put the 47 year-old WikiLeaks founder to trial for obtaining classified information from former US Army intelligence analyst Chelsea Manning. …

Nearly 12 hours after Assange’s arrest on Thursday morning, Mr Corbyn tweeted: “The extradition of Julian Assange to the US for exposing evidence of atrocities in Iraq and Afghanistan should be opposed by the British government.”

Julian Assange: Chelsea Manning says arrest of WikiLeaks founder strengthens claim she is victim of judicial abuse. The 31-year-old was jailed indefinitely for refusing to cooperate with WikiLeaks probe [in a secret trial]: here.