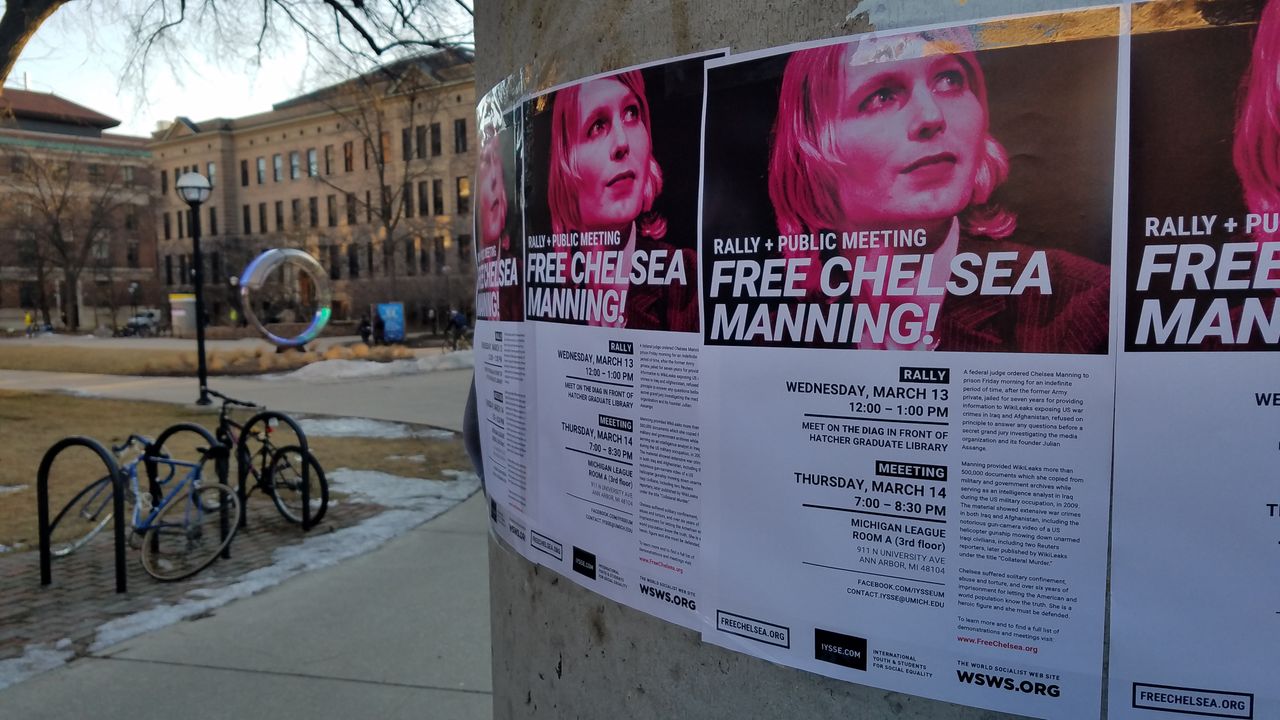 Students and youth across the US demand freedom for Chelsea Manning

The courageous whistleblower Chelsea Manning was sentenced to jail by the US government on Friday after she refused to testify before a secret grand jury against WikiLeaks publisher Julian Assange. WikiLeaks published Manning’s “Collateral Murder” cockpit video in 2010 along with other leaked documents that exposed to the war crimes committed by the US military.

The International Youth and Students for Socialist Equality (IYSSE) and Socialist Equality Party are leading the fight to organize opposition to the attack on Manning and Assange by holding a series of meetings and rallies across the US.

The IYSSE campaigned for the rallies at college campuses throughout the US, where students and youth voiced powerful support for the freedom of Manning and the defense of democratic rights. 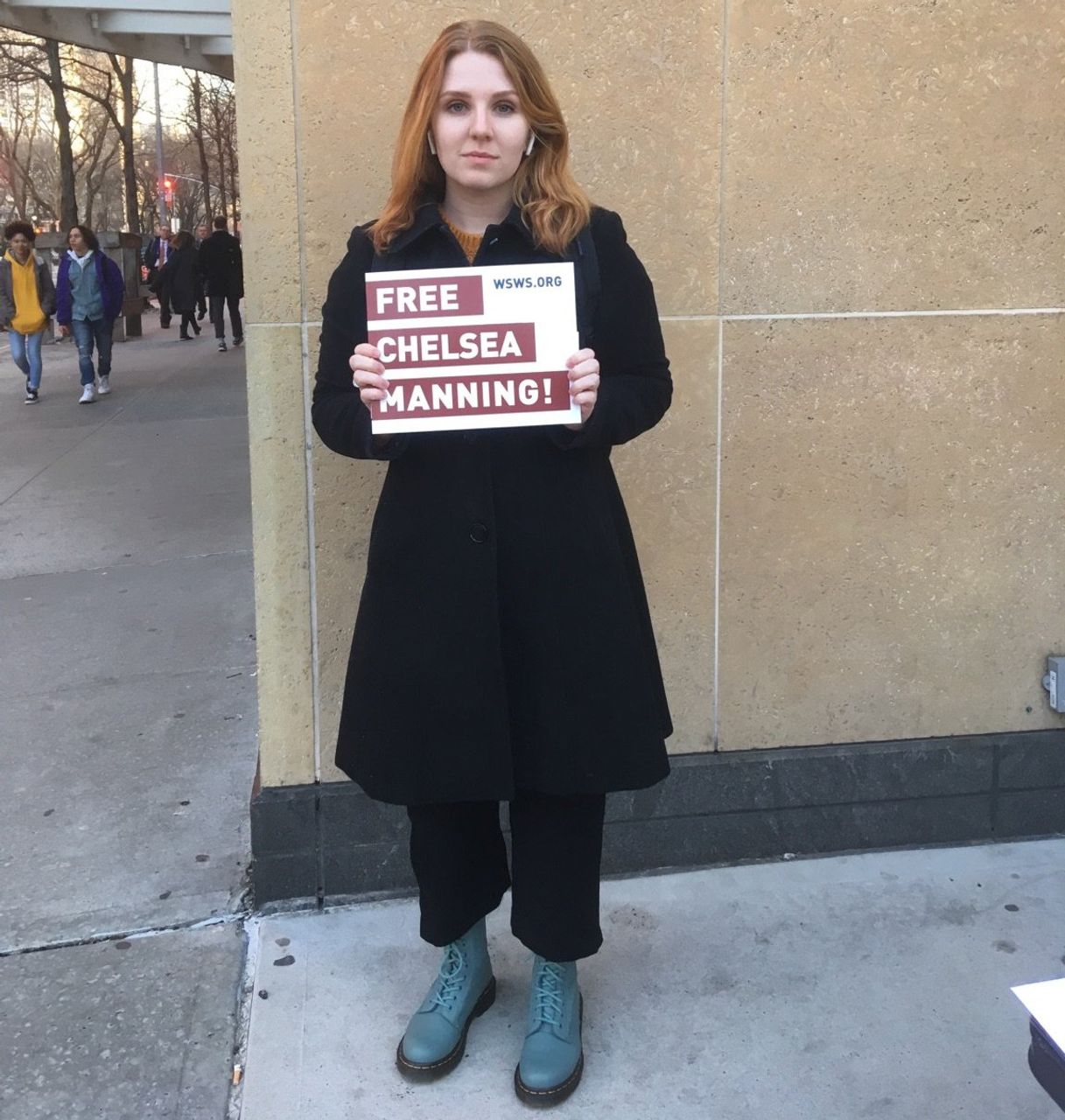 Alycia, a journalism student at NYU, said, “Arresting Chelsea Manning is setting a dangerous precedent. The people should be able to hold the government accountable. This is what she was working for. Hardly anyone among the journalists is openly defending her.”

Dayna, a theater student at NYU, said, “I’m attending [the rally to defend Manning] because I think that they’re holding her in prison, without proper medical care, simply because she won’t falsely testify, which is disgustingly undemocratic. She risked everything to expose the imperialist machine, and I think that same machine is using this flimsy excuse to make an example of her to discourage others from damaging them further.” 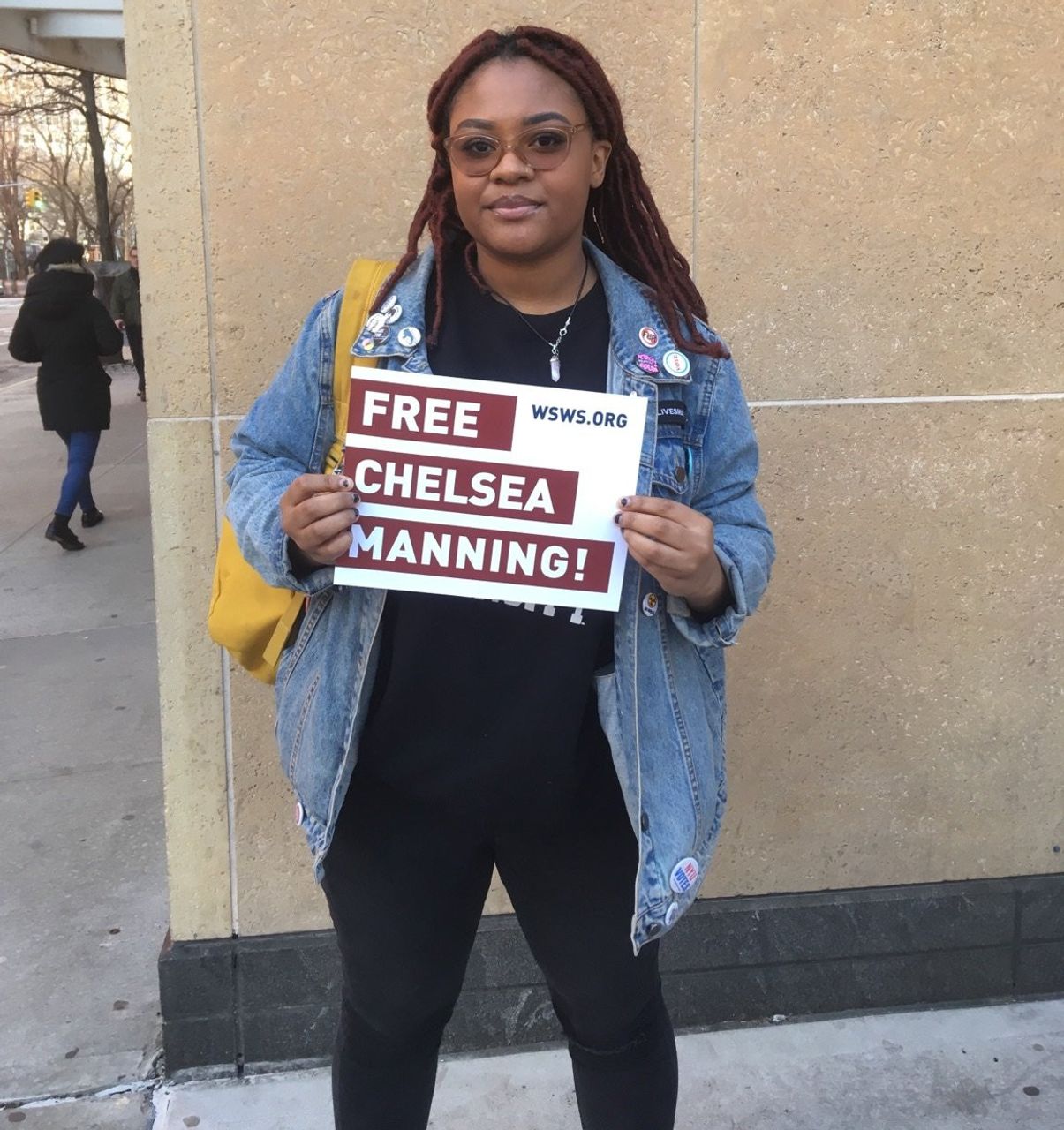 Cheree, another NYU student, told the IYSSE, “I love whistleblowers. I think [Chelsea] is a hero. I believe the American people have a right to know these things. It’s admirable that she and Edward Snowden are still continuing their efforts. I’ll join the rally!”

Elias, also an NYU student, said that he supported the rally because “the only way I can keep the ideals of public service alive is work like this rally, to ensure that when institutions abuse the trust we give them, we call them out and demand a system that works for us, for the people, not the elite, the people with money.” 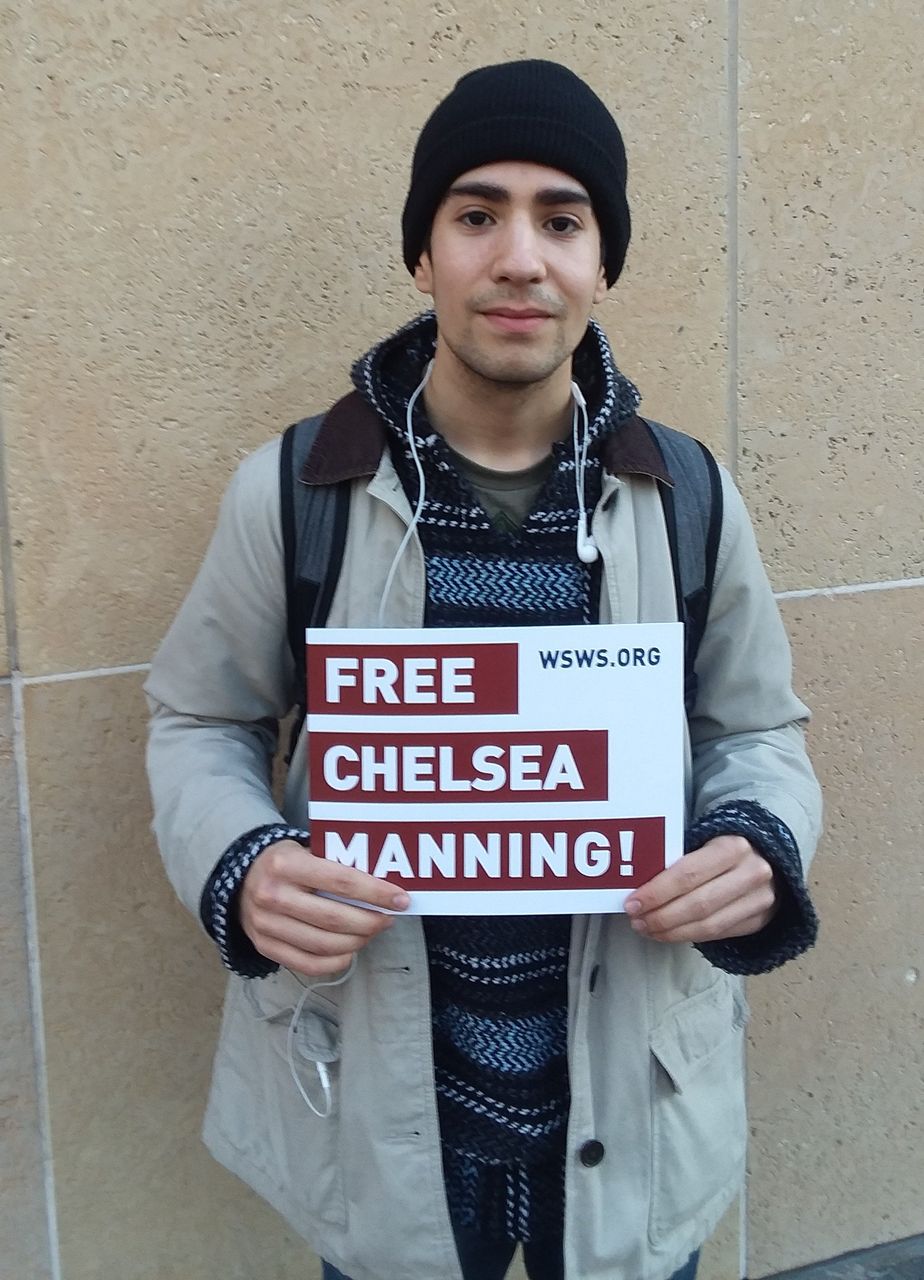 Noah, a student from Northern Virginia Community College, said that the incarceration of Manning was “an attack on democratic rights.” Manning and Assange were being punished for exposing “war crimes committed by governments around the world to the working class.” For this reason, Noah said, “the only people that can free Chelsea Manning, along with Julian Assange, is the international working class. An attack on Manning is an attack on the working class as a whole.”

Rhi, a biology major at Northern Virginia Community College, felt Manning had been right to refuse cooperation with the Trump administration. “Manning rightly demonstrated a distrust in the grand jury process, being that it is a facet of the U.S. judicial system which functions as nothing less than an arm of the state.”

She called the attacks on whistleblowers an “increasingly desperate attempt to quash political dissent and cover up the casualties of American imperialism.” She declared that youth and students had the duty “to defend her unreservedly and unequivocally in her fight to survive possible detention.”

Linda, a psychology major at San Diego State University, said, “I think it’s imperative that workers and students come to the defense of Chelsea Manning and demand her release. The fact that she is being jailed for uncovering the murderous war crimes of the US and refusing to testify against Julian Assange is disturbing and should concern everyone. Her imprisonment has far-reaching consequences and implications for us all and for anyone willing to put their life on the line for exposing the truth about the US military apparatus.” 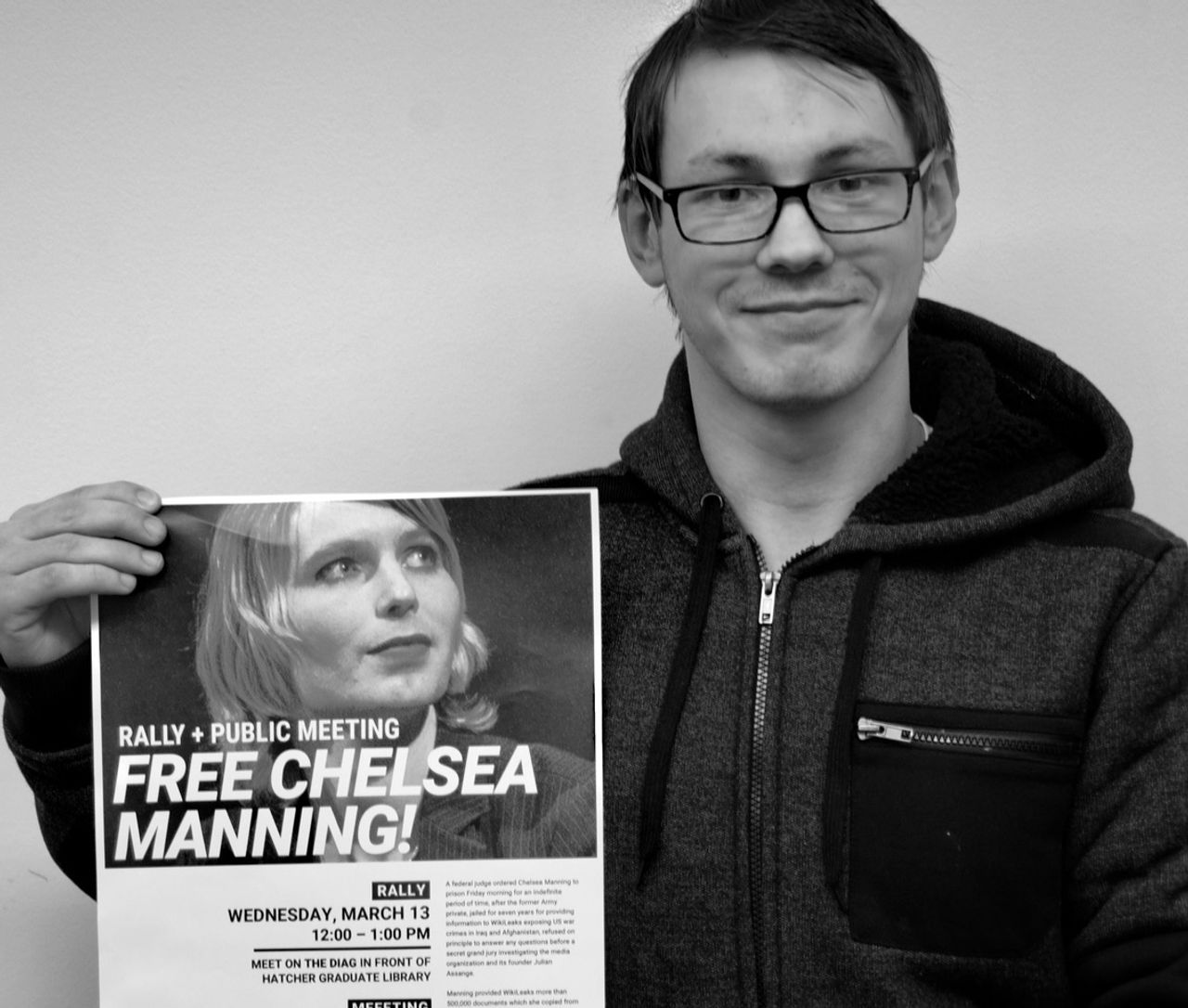 “I used to be a Democrat, a staunch nationalist, because that is what my parents were. But I began to realize that I was more to the left because I believed in peoples’ rights and I believed that there should be more equality for everyone. I started seeing how much of a wealth gap there really was and how unfair it was and how so many people could be oppressed. And that is when I found true socialism, rather than Stalinism, and being able to align myself with it.”

Luke, a high school student in Midland, Michigan, said that the American ruling class “has knowingly issued a provocation to the world over, threatening the freedom of the press and democracy itself with the jailing of one of its strongest voices. Chelsea Manning, like the man she has valiantly put her freedom on the line for, has once more become a class prisoner of the sadistic political superstructure that couldn’t get its fix with just seven torture-riddled years of imprisonment.

“It can only be through the organization of the working class and students around the globe in opposition to this appallingly grotesque assault on democracy and the freedom of the press orchestrated by the oligarchs of the land of the free that Chelsea Manning, Julian Assange, and the voice of truth and democracy can be saved.”

Voices at the London Solidarity Vigil in defence of Julian Assange and Chelsea Manning: here.