This 11 April 2019 video from London, England says about itself:

WikiLeaks founder Julian Assange has been evicted from the Ecuadorian Embassy in London where he has spent the last six years. Ecuador’s president has announced that the country has withdrawn asylum from Assange.

Assange was dragged out of the Ecuadorian Embassy by a group of British police officers. Even as he was being brutally manhandled into a police van, Assange challenged his persecutors, “The UK must resist this attempt by the Trump administration… The UK must resist!”

This man is a son, a father, a brother. He has won dozens of journalism awards. He's been nominated for the Nobel Peace Prize every year since 2010. Powerful actors, including CIA, are engaged in a sophisticated effort to dehumanise, delegitimize and imprison him. #ProtectJulian pic.twitter.com/dVBf1EcMa5

“Assange’s expulsion from the embassy and his arrest are unprecedented crimes,” said James Cogan, the national secretary of the SEP (Australia). “A journalist and publisher, who has committed no crime, has had his asylum terminated and has been dragged off to prison in violation of repeated UN rulings upholding his status as a political refugee.”

“The attack on Assange is directed against the democratic rights of the working class. It is aimed at creating a precedent for the suppression of mass opposition to war, austerity and dictatorship,” Cogan added.

“The arrest of Julian Assange by a Metropolitan Police snatch squad is a political crime for which the Conservative government of Theresa May and the Ecuadorian government of Lenin Moreno are politically responsible,” said Chris Marsden, national secretary of the Socialist Equality Party in Britain.

“The arrest took place after police were invited into the Ecuadorian embassy by the ambassador and following what UK Foreign Minister Sir Alan Duncan said was ‘extensive dialogue between our two countries.’ Behind the scenes the Trump administration in the United States is orchestrating events.

“The Socialist Equality Party denounces this conspiracy. We will do everything in our power to mobilise the broadest protest movement by workers and youth against what are preparatory moves to extradite the Wikileaks founder to the US in clear violation of international law.”

At around 5:37 a.m. US Eastern time, WikiLeaks confirmed Assange’s arrest, tweeting: “URGENT: Ecuador has illegally terminated Assange’s political asylum in violation of international law. He was arrested by the British police inside the Ecuadorian embassy minutes ago.”

Several minutes later, WikiLeaks tweeted: “URGENT: Julian Assange did not ‘walk out of the embassy’. The Ecuadorian ambassador invited British police into the embassy and he was immediately arrested.”

British [Conservative] Home Secretary Sajid Javid immediately took to Twitter to declare: “Nearly seven years after entering the Ecuadorian embassy, I can confirm Julian Assange is now in police custody and rightly facing justice in the UK. I would like to thank Ecuador for its cooperation & @metpoliceuk for its professionalism. No one is above the law.”

The bail charges against Assange are politically motivated and were resolved years ago.

The transparent purpose of the WikiLeaks founder’s detention by the British authorities is to facilitate his extradition to the US. This was confirmed by Assange’s lawyers, who stated that he was arrested not only for the bogus bail violations, but also after an extradition request from the US on fabricated conspiracy charges.

The Trump administration, with the support of the Democrats, is seeking to prosecute Assange for his role in WikiLeaks’ exposure of war crimes, mass surveillance and illegal diplomatic intrigues.

The Moreno regime has declared that it terminated Assange’s asylum because he had violated an arbitrary “protocol” that it imposed in October last year. In violation of international law, the protocol banned Assange from making any political statements, including about his own plight. 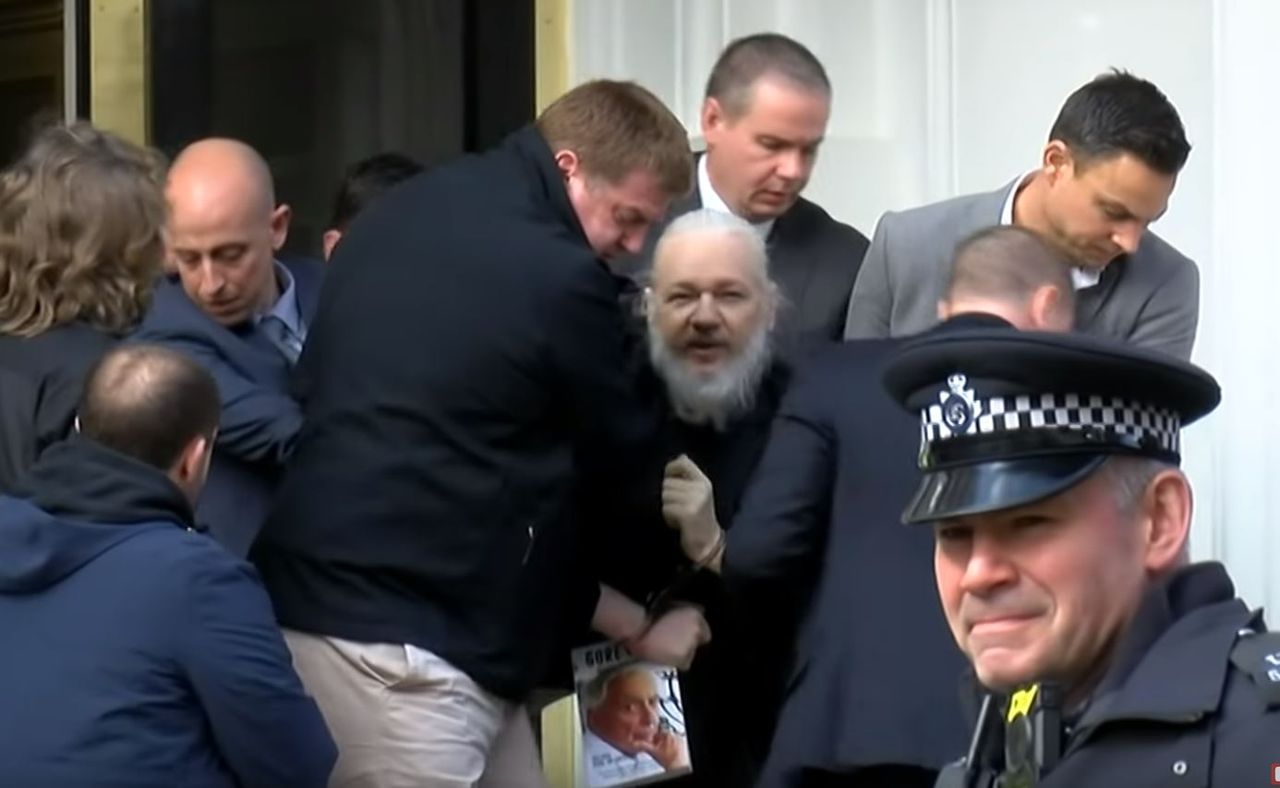 As WikiLeaks has repeatedly stated, the protocol was a transparent pretext for violating Assange’s asylum. Moreno’s government has functioned as a vassal of the Trump administration, subjecting Ecuadorian diplomats to interrogation by the US Department of Justice and spying on Assange on behalf of the CIA.

“The Democratic Party is fully collaborating with the Trump administration in this outrageous attack on Assange,” said Joe Kishore, national secretary of the Socialist Equality Party in the United States. “It has been a central purpose and outcome of the Democrats’ reactionary anti-Russia campaign. The arrest of Assange and Chelsea Manning is an attack on the democratic rights of all workers and must be opposed.”

Assange’s arrest has triggered widespread popular revulsion and condemnation from leading journalists. “The action of the British police in literally dragging Julian Assange from the Ecuadorean embassy and the smashing of international law by the Ecuadorean regime in permitting this barbarity are crimes against the most basic natural justice,” wrote Australian journalist John Pilger on Twitter. “This is a warning to all journalists.”

SEP Australia National Secretary James Cogan concluded: “The Moreno regime, the British government of Prime Minister Theresa May and all those involved in the conspiracy to force Assange from the embassy have committed a violation of international law that will brand them forever as criminals and gangsters.

“The SEP will do everything it can to mobilise the immense support that exists for Assange. We condemn the Australian government and the entire political establishment for abandoning Assange, an Australian citizen, and collaborating in the attacks on his fundamental rights.

“Now more than ever, the SEP will fight to build a mass movement to force the Australian government to fulfil its obligations to Assange. It must compel the British government to allow Assange to leave the country and return to Australia, with a guarantee against extradition to the US.”

The SEP (Australia) will hold rallies tomorrow, Friday April 12, at 1 p.m. at the Martin Place Amphitheatre in Sydney and at 4 p.m. outside the Victorian state library in Melbourne to demand that the Australian government take immediate action to defend Assange.

Christine Assange, Julian’s mother and the most determined campaigner for his freedom, issued the following statement endorsing the rallies: “I urge everyone currently in Australia, citizens or visitors, to attend the rallies tomorrow to demand that the Australian government act urgently to protect Julian and bring him home. We are in election mode and it is a very good time to use your people power.”

We appeal to all workers, young people and defenders of democratic rights to attend.

Julian Assange will be taken to Westminster Magistrates court this afternoon. He has been arrested under a US extradition warrant for conspiracy with @xychelsea for publishing classified information revealing war crimes in 2010.https://t.co/vvbZBOgCwL