IRISH women can be congratulated on the outcome of Friday’s referendum on repealing the ban on abortions in their country.

Irish premier Leo Varadkar will be hoping to take credit for holding the vote, using it to gloss over his government’s right-wing economic record with a progressive sheen, but the victory is the result of years of fearless campaigning by women who refused to be intimidated by the power of patriarchy.

In the Irish republic the struggle will now move to the implementation of the referendum result and our Irish sisters know they have the support and solidarity of the British labour movement in that struggle.

The overwhelming mandate for change highlights the anachronism of laws in Northern Ireland, where women are still denied the right to terminate pregnancies.

As Labour’s Jonathan Ashworth says, this situation is surely unsustainable now that women in the rest of Ireland are set to join women in Britain, which continues to rule the territory, in enjoying that right.

Nonetheless, Theresa May has made it clear she will resist any bid by MPs to vote on liberalising laws in the north.

She knows full well that a majority even in her own party would favour such a move — as has been made clear by Women and Equalities Minister Penny Mordaunt.

But she cannot risk the collapse of her shaky alliance with the Democratic Unionist Party, which has made it clear it will block any reform.

Hiding behind Westminster’s role as a “caretaker” administration in the north because of the continuing absence of a Stormont government is a poor excuse when May has done nothing to press the DUP to address republican concerns and restore power-sharing in Belfast.

The Alliance for Choice will be continuing its campaign to press politicians within Northern Ireland to change their ways, and is entitled to whatever assistance comrades in Britain can provide, including by confronting the issue directly in Parliament.

If that splits the Tory Party, ends the DUP alliance and forces new elections in Britain, so much the better. 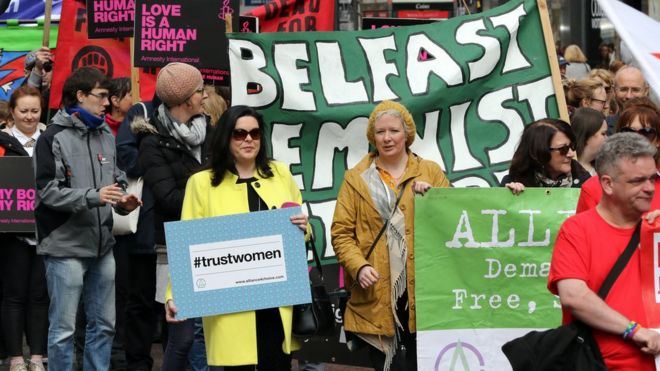 Theresa May’s reliance on the DUP hobbles her response to the Irish vote: here.

Wales: UNISON assistant general secretary Roger McKenzie told the annual Merthyr Rising trade union rally today that victory in the Irish referendum to repeal restrictive abortion law was an object lesson for trade unionists. “This was a massive statement by the people of Ireland. People got up and organised themselves, their families and their work colleagues. This is the start of a process, not the end,” he said: here.

SATURDAY was a historic day for Ireland. The 8th amendment introduced in 1983 has finally been removed and the face of Ireland is changed utterly. Contrary to what the Establishment political parties have already started to say, the credit for this victory rests squarely with the women of Ireland: here.

THE Catholic Church-dominated state of the Irish Republic was rocked to its foundations on Saturday when the results came through after the referendum on abortion. This showed that the 23 May 2015 shock for the state when a referendum agreed to ‘same sex marriage’, was not a one-off, and that the huge gulf not only remains between the Catholic Church and the masses, it has widened, with the mass of the working class, which has borne the full brunt of the economic crisis since the 2008 crash that destroyed their living standards, fighting back in every way that they can: here.