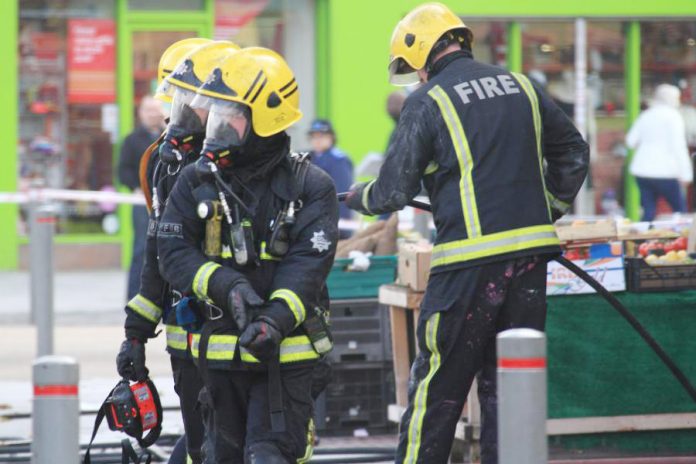 THE Fire Brigades Union (FBU) has welcomed the news that three Metropolitan Police officers are to face disciplinary proceedings following a racially motivated attack on a black firefighter in 2011.

Off duty London firefighter Edric Kennedy-MacFoy was verbally abused and Tasered by police in Harrow, north London after he attempted to help them identify a man who had thrown a rock at a police van.

Following an investigation by the Independent Police Complaints Commission (IPCC), three officers will now face gross misconduct charges. Soon after the incident, one of the officers involved was promoted.

Michael Nicholas, secretary of the FBU’s Black & Ethnic Minority Members (B&EMM) section, condemned the police officers involved. Edric acted as an upstanding member of the public and tried to assist the police in their job. It is nothing less than horrific that, as a result of his skin colour, he was brutally assaulted.

‘It is shameful that more than 20 years after being called out for institutional racism following the Stephen Lawrence killing, Metropolitan Police officers are still acting in this brutal, racist way’, he said. Questions must now be answered about how one officer involved in the attack went on to be promoted.

‘To members of the black community, it feels as if the officer has been rewarded for his racism. It is of the utmost importance to all of our communities that the Metropolitan Police Service is held to account when these incidents occur.’

Firefighters are being urged to vote for Jeremy Corbyn in the upcoming leadership election of the Labour party, as the Fire Brigades Union believes he is by far the best candidate for firefighters, for the fire and rescue service and for working people in general. FBU members who pay into both the union’s political levy and affiliation levy fund, have the right to vote in the upcoming leadership race.

Why Corbyn? The FBU stated: ‘Jeremy Corbyn’s long-standing support for the union goes back more than 30 years when he stood on the picket line with firefighters who took part in the first national strike over low pay.

‘Since then he has stood shoulder to shoulder with the FBU during its many campaigns to protect and extend the rights of firefighters throughout the whole of the UK. He was a founding member of the FBU parliamentary group to give us a strong voice in Parliament.

‘Earlier this year, in a seminal speech to the FBU’s annual conference, Jeremy Corbyn committed the Labour party to “rebuild the fire service” which has been decimated by huge funding cuts since 2010. He has made it clear that austerity will be ditched and in its place, safe levels of funding will be introduced for the fire and rescue service.

‘Fire station closures will stop and firefighter jobs will be better protected.’

Matt Wrack, FBU general secretary, said: ‘With respect to Angela Eagle and Owen Smith, it is clear that for firefighters and other working people Jeremy Corbyn is the only choice. He understands the fire and rescue service and will do right by us. The union wholeheartedly supports him and we would urge FBU members to vote for Corbyn.’

Earlier, responding to the resignations of Labour MPs from the shadow cabinet, the FBU had issued a statement under the headline ‘Stop the coup against Corbyn’. Matt Wrack said: ‘Trade unionists and Labour Party members will be baffled and angry about these resignations that appear to have been coordinated to cause maximum damage.

‘It is bizarre that some of the MPs making the loudest criticism of Jeremy Corbyn over the referendum completely failed to convince the electorate in their own constituencies. Following the referendum, Labour should be setting out policies to defend jobs, public services and wages as an exit from the EU is negotiated.

‘Instead, some Labour MPs are playing irresponsible and silly games from their Westminster bubble. They should respect the overwhelming democratic mandate which Jeremy Corbyn achieved only last September.’

Meanwhile, the cuts being forced by central government are having a devastating impact on the emergency response to the communities of the West Midlands. West Midlands Fire Service (WMFS) has seen a budgetary cut of £28m during the course of the last parliament and expects a further loss of at least £10m over the next four years.

In an attempt to implement these cuts, WMFS intends to slash up to 300 firefighter posts, but will still try to maintain their current resources. The service hopes to use the goodwill of firefighters carrying out a vast amount of overtime to make up the shortfall.

The FBU believe that this is unsustainable and will make a lottery of whether fire engines are available or not. Andrew Scattergood, chair of the FBU in the West Midlands, said: ‘The cuts from the Westminster government have made it impossible to deliver a service that keeps the public safe. It will be absolutely disastrous if more posts go. We will have a rescue service in name only.

‘The new staffing system that is being trialled in anticipation of the 300 job losses is already failing. At best it is unsuitable and insufficient, at worst it is dangerous and will cost lives. The FBU have warned that the new staffing system leaves the service dependent on the goodwill of firefighters to take overtime shifts. This has already resulted in shifts being understaffed and fire engines being left unavailable. The simple fact is that there are too few firefighters in the West Midlands.’

There have also been calls for the chair of Greater Manchester Fire and Rescue Authority to quit after the local branch of the FBU unanimously passed a vote of no confidence in his leadership.

The union says firefighters have lost confidence in David Acton after the authority backed controversial plans to put firefighters on ‘family unfriendly’ 12-hour shifts. The shift pattern change is part of a raft of measures unveiled in response to central government funding cuts which will also include more than 250 job losses.

Currently, shift start times in Greater Manchester are 08:30 and 19:00. The new proposed shift pattern is made up of equal 12-hour shifts between 10:30 and 22:30. The FBU says they are universally unpopular amongst firefighters and would cause mayhem for those with caring responsibilities.

A firefighter and mother of one, who cannot be named, told the FBU a finish time of 22:30 would be a ‘nightmare’ for her childcare arrangements as the cost of arranging for someone to look after her child would be ‘crippling’.

Gary Keary, brigade secretary of the FBU in Greater Manchester, said: ‘We are deeply disappointed that Cllr. Acton has failed to listen to firefighters who have great concerns about the new shift system, especially when we have offered viable alternatives.

‘It is absolutely galling that this decision was taken when there is still a distinct possibility our members will reject the proposal. It is clear that his position is untenable and he needs to consider his future. Firefighters have lost trust in him. The union believes he must go.’

• Earlier this year, the mental health charity Mind reported that 30% of firefighters have contemplated taking their own lives. Now, the Fire Brigades Union has produced a new guide for union reps to help them understand and support those suffering from mental health issues in the workplace.

The guide will explain the range of mental health challenges that can affect firefighters, what the workforce can expect from their employers and how FBU officials can represent and support them. Sean Starbuck, the FBU national officer responsible for the guide, says that the government’s austerity programme has made the situation worse.

‘In recent years firefighters have faced lower pay, longer hours, job insecurity, changes to shift systems, attacks on pensions and a whole host of other arbitrary changes to working practices,’ he says.

”There is still a stigma attached to poor mental health. Many members would rather say they are off ill with something else – anything but admit to mental health problems. We are not going to be able to help anybody when they fear punishment for suffering from a legitimate medical problem.

‘This guide will help our reps tackle that stigma and support our members who are going through a terrible period in their lives. The FBU takes the issue of mental health very seriously and this is only an initial document. We have other work planned.’