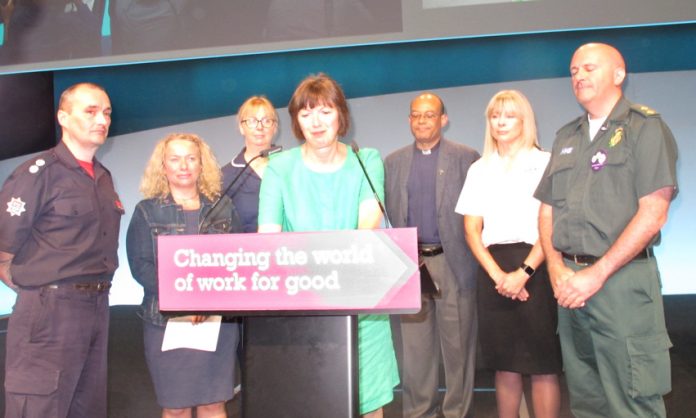 THE TUC General Secretary Frances O’Grady yesterday welcomed six emergency workers to Congress who had been involved in the Manchester, Westminster and Finsbury Park attacks and the Grenfell fire.

Three of the workers addressed congress. Jo, a nurse at Stockport Hospital, paid tribute to fellow workers who came into work despite being off after the Manchester bombing.

Unite member Catherine, a clinical psychologist, said: ‘The morning after the Manchester attack I gave support to patients.’

Dave Wallman, from Battersea Fire Station, said: ‘I can see the images of that fire today. I saw the look on the faces of firefighters. I’ve never seen such looks.’

This calls for a campaign to ‘ensure the public inquiry addresses the concerns of residents, survivors and those workers who responded to the fire’ to ‘highlight the impact of privatisation, casualisation and deregulation on public safety’ to ‘end and reverse the cuts to fire and rescue services and to local government’ and to ‘build a movement of tenants in the public and private sector and of owner occupiers for the provision of decent and safe housing for all.’

Moving the motion, FBU General Secretary Matt Wrack said: ‘14th June 2017 should be marked in history. It was a date of nightmare and destruction.

‘If you visit Grenfell there is tension and anger in the area. That anger is right. We stand side by side with the victims of Grenfell. We will leave no stone unturned to get to the truth of what and why this happened. Justice for Grenfell!’ Seconding the motion, Jim Kelly of Unite said: ‘We’ve seen deregulation increasing the coffers of the construction industry bosses, most of whom are donors to the Tory Party. Two weeks after Grenfell Haringey Council privatised its housing stock to spivs and speculators.’ He concluded by calling for the election of a Labour government ‘that will end deregulation and privatisation.’

Zita Holbourne, PCS equalities spokesperson, said: ‘Grenfell residents were not just ignored, they were threatened with legal action. A disproportionate number of black families, children and disabled people lived on the top floors.’ She slammed the disparity between rich and poor in the borough, saying: ‘It’s disgraceful that the council have failed to rehouse 138 who were displaced by the fire. The community has repeatedly raised concerns that the scope of the inquiry is not wide enough. To know the full impact, there must be an immigration amnesty.’

She concluded: ‘The government need to stop the cuts. There must never be another Grenfell.’

Melissa Hind, NEU Kensington and Chelsea Branch, said: ‘Schools and nurseries were closed because of the fire, students still haven’t got back to school. Some were moved out again because there was a gas leak. All those affected by the Grenfell fire will suffer for years. The government must not be allowed to sweep this under the carpet and none of this must be allowed to happen again.’

Fliss Premru, TSSA, said: ‘The tragic and shaming Grenfell fire draws a line for deregulation and social cleansing. We must roll back marketisation and restart council house building. We must stop privatisation. We demand justice for Grenfell and social justice for all.’