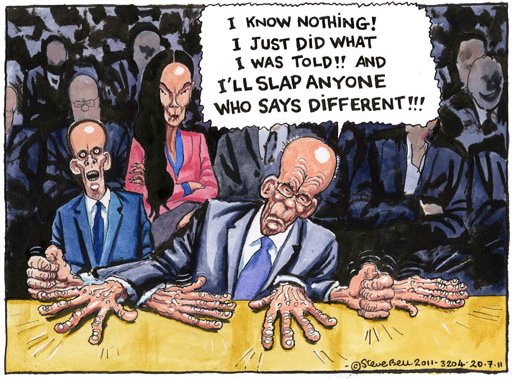 From The English Blog on this cartoon:

This cartoon by Steve Bell from The Guardian relates to yesterday’s appearance of Rupert and James Murdoch before a parliamentary select committee. The media tycoon expressed regret for News Corporation‘s involvement in the phone hacking scandal but insists he was kept in dark.

The woman seated behind Rupert Murdoch is his wife Wendi. And the man on his right is his son James. The hands all belong to Rupert Murdoch, who repeatedly banged his hands on the table during the hearing and behaved in a cantankerous manner.

Britain: A damning report by MPs denounced Scotland Yard today for “a catalogue of failures” over its investigation of the phone-hacking scandal: here.

A would-be police dog has been rejected from the recruitment process because she doesn’t like to bite, police said today: here.

Scandal-ridden Prime Minister David Cameron cowered behind a wall of silence regarding his frequent meetings with chiefs of the Murdoch empire today: here.

Crafty ex-News International boss Rebekah Brooks tried to play down her cosy links with Prime Minister David Cameron as she was questioned by MPs on Tuesday evening: here.