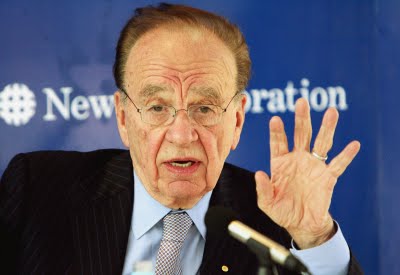 From the British correspondent of the Los Angeles Times in the USA:

REPORTING FROM LONDON — James Murdoch said Tuesday he is stepping down as chairman of the satellite TV network BSkyB amid Britain’s ongoing phone-hacking scandal and accusations that newspapers under his leadership broke the law and tried to cover it up.

In a letter to other members of the BSkyB board, Murdoch indicated he had decided to resign because of the constant stream of negative publicity surrounding News Corp., whose British arm, News International, is under investigation in the hacking scandal.

“As attention continues to be paid to past events at News International, I am determined that the interests of BSkyB should not be undermined by matters outside the scope of this company,” Murdoch wrote. “I am aware that my role as chairman could become a lightning rod for BSkyB and I believe that my resignation will help to ensure that there is no false conflation with events at a separate organization.”

News Corp. owns about 39% of BSkyB and has tried to win overall control of the TV service. But it was forced to shelve its bid last summer after the phone-hacking scandal exploded in the public consciousness and prompted a backlash against the company.

The head of News Corp., media tycoon Rupert Murdoch, summarily closed down the weekly tabloid News of the World last July after it was revealed that the paper routinely hacked into the cellphones of celebrities, politicians and even murder victims.

Since then, more than a dozen journalists and executives with News International have been arrested and questioned by Scotland Yard in its wide-ranging probe into allegations of phone hacking and bribery. Police are also investigating whether News International engaged in a coverup of criminal activity at News of the World and its sister tabloid, the Sun.

James Murdoch, who served as chairman of News International until stepping down from that post in February, has consistently denied any knowledge of widespread phone hacking at the papers then under his command. He insists he was led to believe that phone hacking was confined to one “rogue reporter” at the News of the World who was convicted and jailed for his offense.

But many British lawmakers, before whom the younger Murdoch has been called to appear for questioning more than once, have been highly critical of his leadership and skeptical of his denials.

BSkyB said he would be replaced by Nicholas Ferguson, currently the company’s deputy chairman.

Chris Bryant, a member of Parliament from the opposition Labor Party, welcomed the report of Murdoch’s decision to step down. Bryant has been outspoken in his criticism of Rupert Murdoch’s news empire in Britain, which he says has exercised undue influence over British politicians and harassed lawmakers like him who object to it.

“I hope that the British political class … will never kowtow to any one media mogul, will never allow one body to have so much of the newspapers and the broadcasting in one pair of hands, because in the end I think that leads to terrible hubris,” Bryant told the BBC.

The Roots Of An Empire: Rupert Murdoch’s Australia: here.