On Wednesday, tens of thousands of Chicago Public Schools (CPS) teachers, staff and students rallied in support of the teachers and staff strike that began last Thursday.

The WSWS spoke with teachers, staff, parents and students on their demands, on the conditions in the schools and their opposition to the Democratic Party’s decades of attacks on public education … 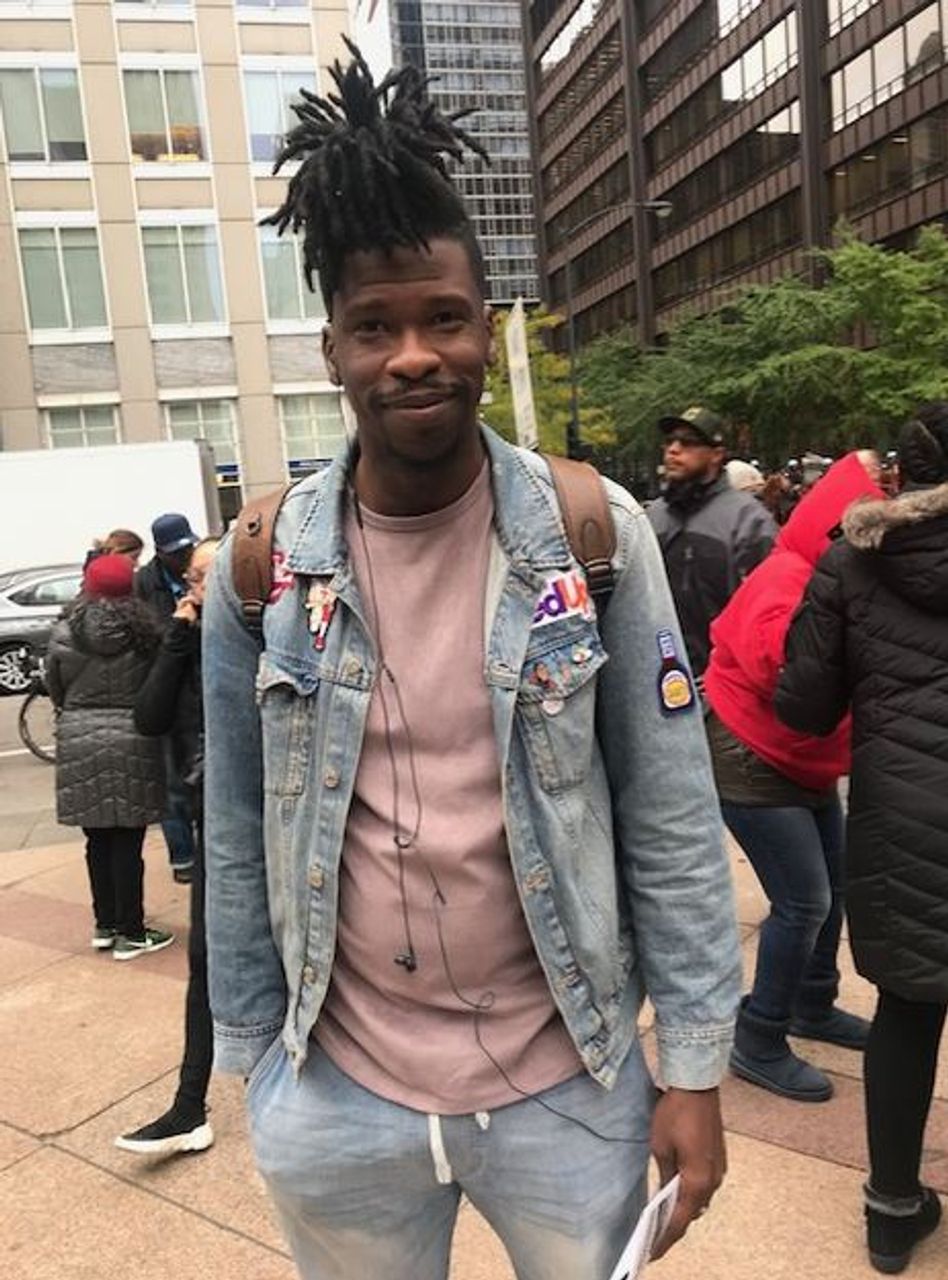 Glenn, who will start a teaching job in CPS next year, explained why he had come to the morning protest: “What brought me here is that I have three kids in the CPS who are currently at home. I have the view of both a teacher and a parent of three children under five. I know there is a lack of resources in the schools and for the teachers. As a parent, I feel the brunt of it.

“I have seen kids act out, and they don’t have a counselor at the school. School should be a safety net, not a prison.

“The politicians of both parties are fattening their pockets and pursuing their own agenda, not one that helps people who work and make the country go.

Katie has been a teacher for six years and before that she was a teacher’s aide for three years.

She said, “The main issue is student-based budgeting, according to which a certain amount of money is allocated per pupil. This pits schools against one another for pupils. It was brought in by [mayor] Rahm Emanuel.

“The fight for more librarians, counselors, social workers partially combats the effects of per-pupil budgeting. It is a question of fully-staffed schools.

“The wages of support staff are so low they all have second jobs. I’m paycheck to paycheck like everyone else, but we’re not supposed to say we’re striking for higher wages.” 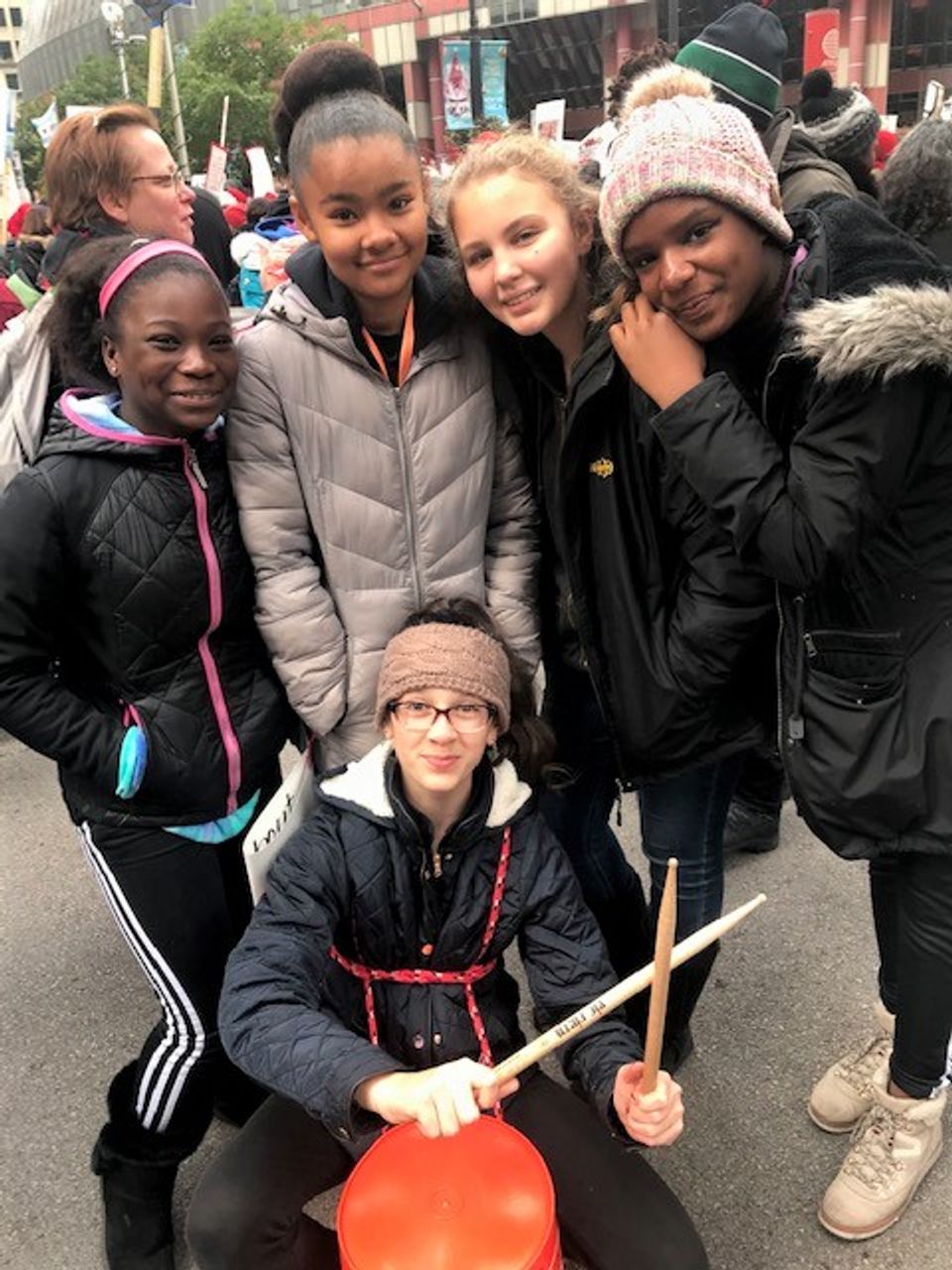 Shayana,13, came with a group of students from Peirce Elementary School. She said, “I’m here to support the teachers. My mom used to work at a school. The class sizes were 39-40. That’s crazy. We need to improve the conditions.”

Maralyn said, “I’m striking because we need small classes, social workers and nurses. We don’t have a nurse at our school. A student hit his head and had a concussion, and all they could do was give him an ice pack.”

“In 2012, the union didn’t win a single concession for us. I think that the relationship between teachers and the city of Chicago has been ‘take what we give you and be happy.’ I think they’re just expecting us to roll over and take it, but we’re all here today because we’re sick of it. I think we’re unhappy that [it’s as if] the CTU didn’t even read the contract last time, and because of that, we’ve been grinding it out. What kind of damage is that doing to all of our students?”

Asked about the statements made by Democratic Mayor Lori Lightfoot that there is not enough money for public education to meet teachers’ demands, the teacher responded, “There is money. The Tax Increment Financing (TIF) funds [slush funds that divert property taxes normally meant for schools and services to mayoral control for ‘business development’ increased 27 percent in the last year. 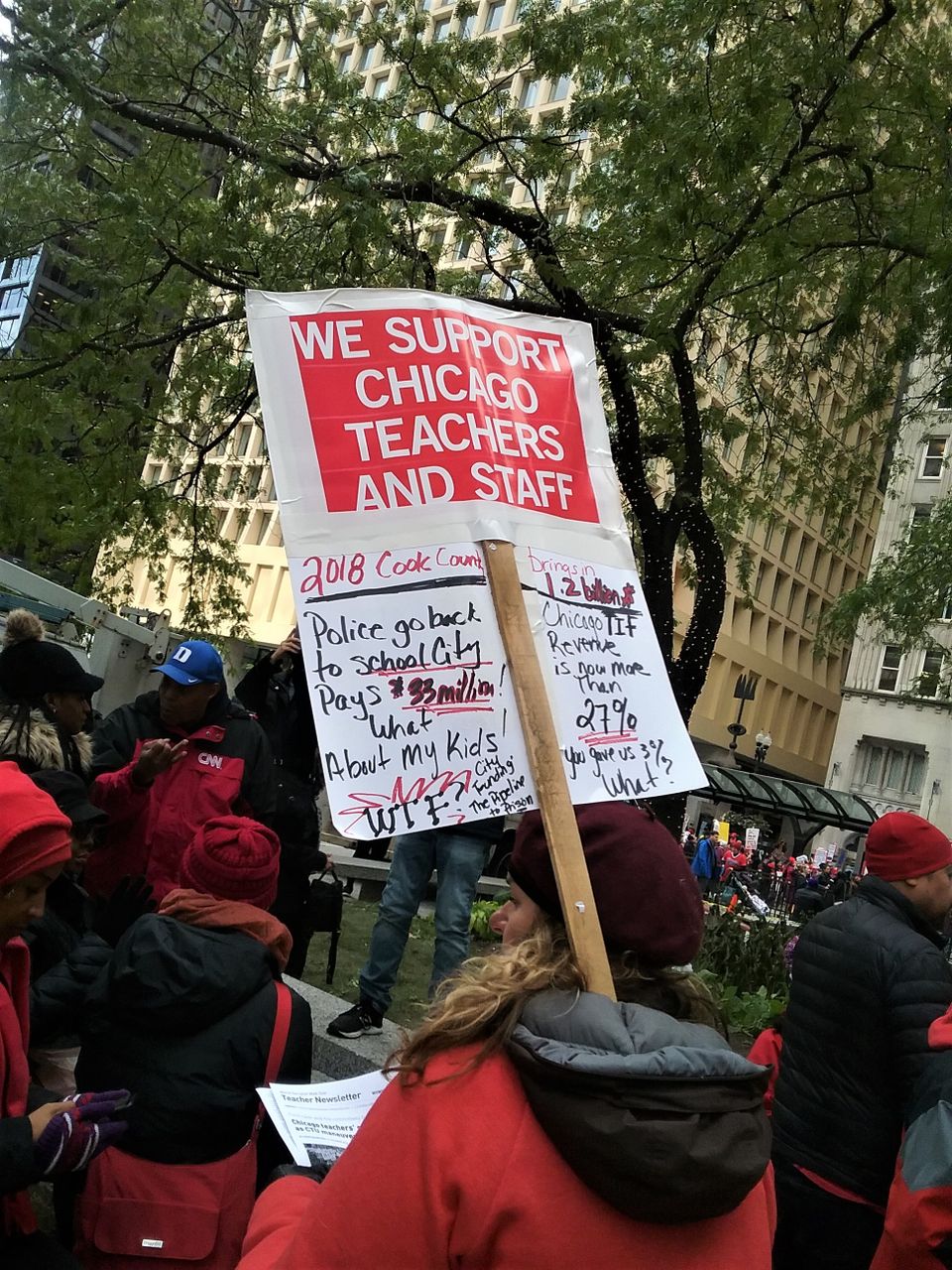 “There have been over a billion dollars spent on the police over the last several years. What about all of the corporate money from companies that are doing business in Chicago that is supposed to be taken to be used to fund the public sector? Why are they robbing from the public to make sure that the private sector keeps doing well?”

Regina, a CPS elementary school teacher, spoke about the lack of resources in the schools.

“I’ve worked at schools on the north side and on the southwest side, and there is a huge discrepancy in funding among some of them. At the school that I work at right now, we only have one nurse that comes in once per week. We don’t have any after school sports or programs for the students to enrich their educational experience.

“This year I have 33 students in a class by myself. It’s really rough. There are class size panels that are held every year for CPS, but the sizes that they decide upon in those panels are never enforced. We should have a cap on class sizes, like they do at some of the schools in the suburbs, such as when a class reaches 25 students, then you need to bring in another teacher.”

A group of high school teachers and staff from the south side of Chicago spoke about their demands.

“We need far more staff in the schools than we have now,” a special education teacher said. “We don’t have enough social workers or counselors for all of the children who come in traumatized. In some schools, we don’t have a nurse. If a student has a medical emergency, then what are you to do? As teachers we are the counselor, the nurse, the social worker, and the trauma center for these children.”

“Being on strike is the best way to serve our students,” a young teacher added, remarking on the calls by the Lightfoot administration and Democratic Party in Chicago that teachers should go back to work while the contract is being negotiated.

“My classrooms all have at least 30-plus [students]. A lot of our students are coming in with trauma, and you can’t teach them until you first unpack what’s going on at home. So making sure that those needs are met is key.”

“There’s a lot of money that’s there and instead it’s being used on things like the Lincoln Yards [luxury development],” another young teacher said. “That’s around a billion dollars that could have been given to help communities that have been economically blighted. A lot of schools were closed five to seven years ago.”

Another teacher spoke about the way that schools in poorer, working class communities were systematically slated for closure.

“We’re also fighting for salaries,” the young teacher added. “How can we even afford to live in the city when we’re not nearly being paid enough?” 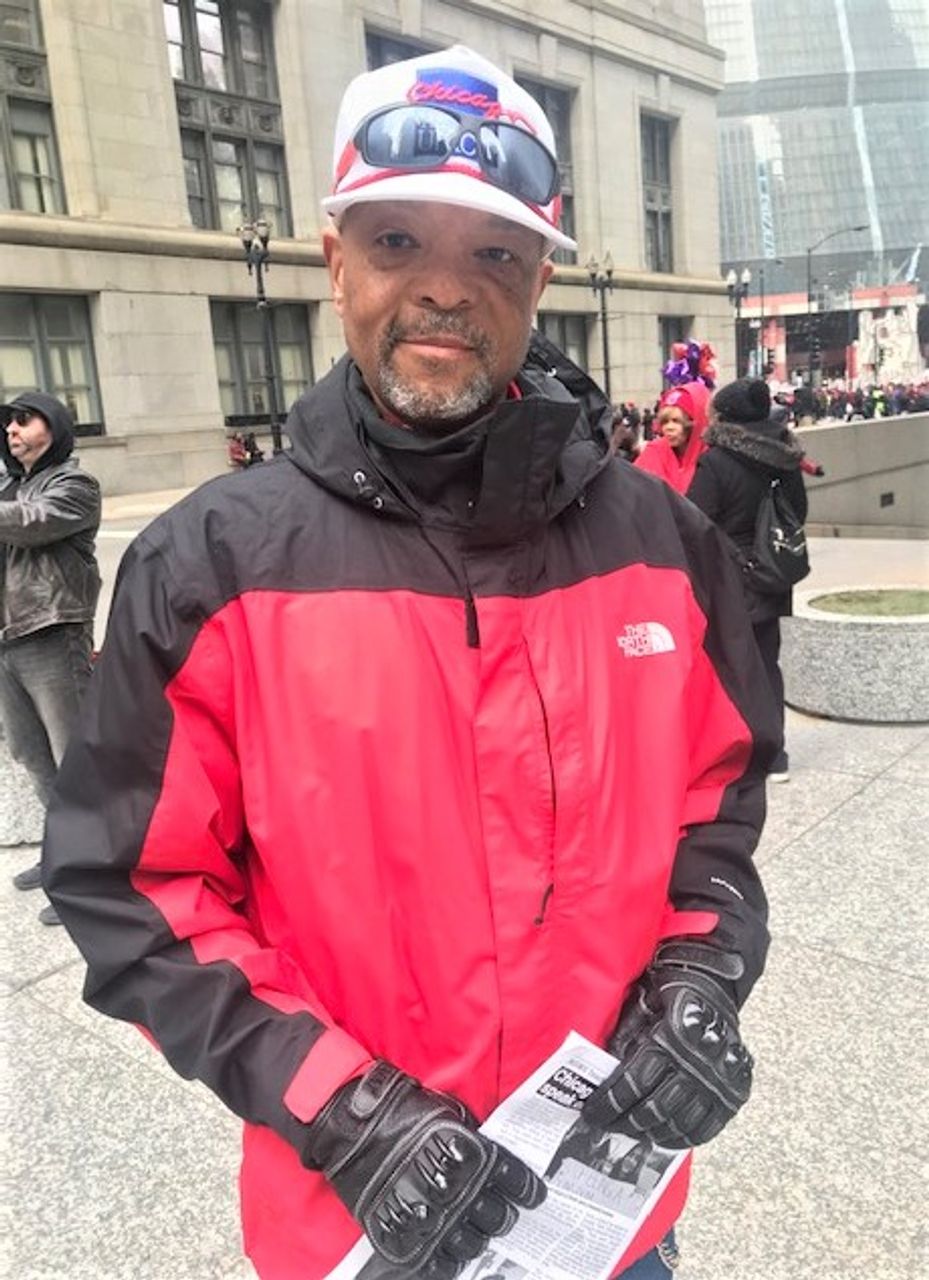 Marcus, a veteran school worker, said: “I have been in the Chicago Public Schools system since 1994.

“The main issue in the strike is smaller classes. Right now, you have kindergarten classes with 40 students. How do you expect the kids to be able to read under those conditions?

“Since I began teaching, conditions have gotten worse. They are not putting money where it needs to be, for the benefit of the children.

“Charter schools don’t help. They are taking away from the student population. I also don’t like standardized tests and evaluations of teachers. If the principal wants a teacher out, he or she will give the teacher a bad evaluation.”