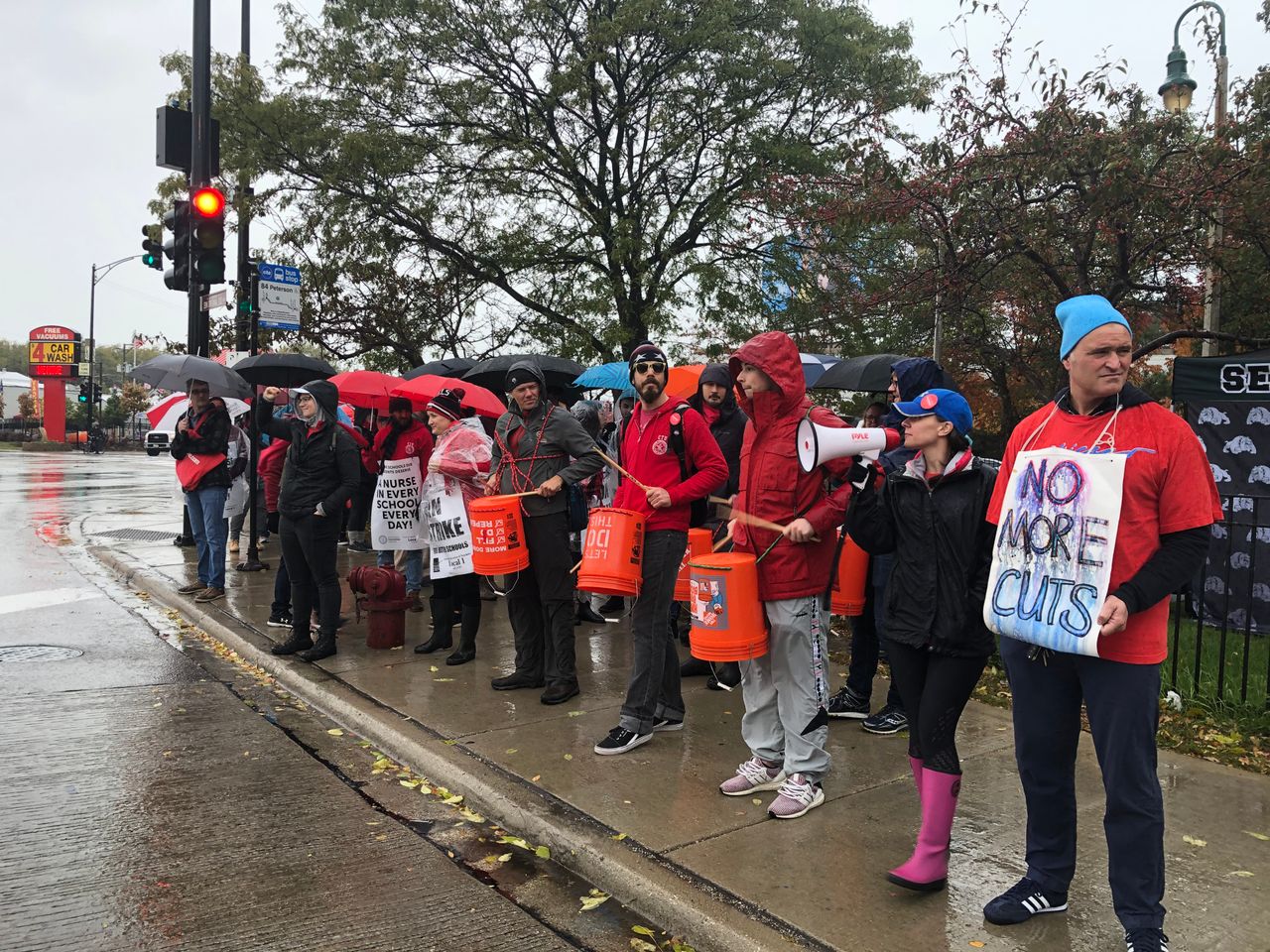 “We are so necessary in the classroom. If we just struck by ourselves the school system would not work. But I get only $21 an hour. I could not live on that if it was my only source of income. After taxes and other deductions, it comes to about $450 a week.

“The people who work at DePriest are so committed, they work so hard every day. The environment in which the students live is pretty hard. Our boys went through the Chicago Public Schools from kindergarten through the sixth grade. But now it’s like a war zone in this area.

“If someone had told me how angry the children would be coming to school, I would not have believed them. But who knows how many come to school without having slept the night before and what they are going through at home?”

Antonia Saldona has been teaching for 15 years in the CPS system. She currently teaches at Laura Ward STEM school in Lawndale.

“I feel like we got cheated in the 2012 strike. The things we were asking for were not given to us.

“I had at one point 47 students in my classroom and, not having an aide to help me, it was very stressful. Imagine 47 papers for every subject area that needed to be graded, and on top of that, the assessments that needed to be done throughout the year, not having enough time during the day to complete them. And I have to worry about my evaluation, too. It was difficult. To meet every single requirement, at times I felt like it had to be a perfect world with a perfect setting to achieve that.

“We have a nurse who comes in once a day, a social worker twice a day. The school is located in an area that is affected by violence, by drugs. Families have been forced to move two families in an apartment so they can be able to afford the living costs in the city.

“There are days when my students are sick, but we can’t send them to a nurse because we don’t have a nurse. Or students are traumatized because they had a family member who was murdered. There’s a lot of anxiety.

“There’s a lot of poverty in the area and we don’t have the proper staff. They want high scores in tests that the state mandates. How can they achieve those scores when their basic needs are not being met?

“People need to know where their tax money is going. I have been accused of being greedy. But this is not about pay or pensions. It is about having a nurse every day, five days a week, having a social worker that is not doing lunch duty, and not being asked to sub. We don’t have a librarian. How is it possible for our students to read if they don’t have a librarian?

“They want to privatize education. They’re turning it into a business. It’s not a business, it’s about educating children.

“We want affordable housing. We have about 16,000 students who are homeless. The wealthy are benefiting. Their pockets are being lined with our taxpayer money.

“I drive an hour to and from my home to come and serve the community. The children have a future and we need to support them.

“We need our communities to be funded. Our children in CPS deserve a better future. I am not asking a lot to have a nurse and counselor in our school.

“I like that a lot of young people are supporting us and are with us in this movement, because it’s going to affect them in the long run.

“The mayor held her campaign on promises she was going to fund these communities and now she is backing away from her words. I hope that in the next election there is a different turnout and outcome.”

“I’m currently serving double the nationally recommended ratio of students to social workers and I’m considered one of the lucky ones in this district. I get to be in my building full-time, which is considered a big luxury.

“We have about 460 students at our school. We are asking that schools be staffed at an adequate level to allow clinicians to fulfill their full responsibilities.

“We have a mayor who came in and gave all the money to Lincoln Yards [a 50-acre proposed luxury development] and says there is nothing left for the schools.”

Kenyatta, from Laura Wade Elementary, has been a teacher’s assistant for seven years.

Laura Ward Elementary was part of a school “merger” in 2013, following the sell-out of 2012. It moved into the nearby Ryerson School building, and the merged schools retained the name Laura Ward. 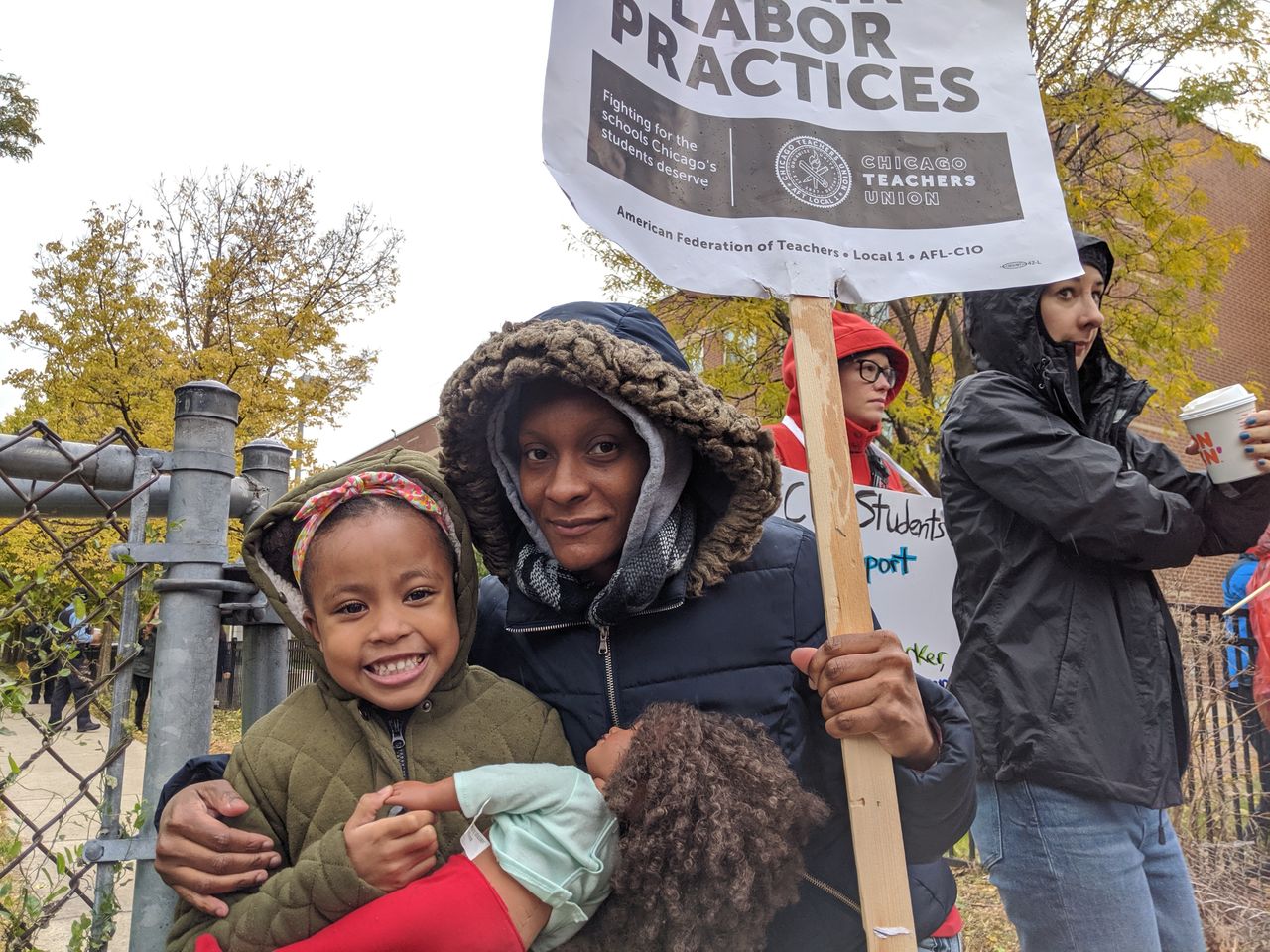 “We’re doing the best we can with the small amount of resources that we do have. We need more support! Smaller class sizes, more nurses, more support staff, so no one person is trying to teach 35 kids and they are all at different learning levels. How can we meet these kids’ needs?”

On a general strike: “Whatever job you are doing, I believe that we all support one another. We should all come together as one and voice our opinions on equality. And if there is a company on strike, we should be out and supporting them. What one group does is beneficial for the others. I totally agree, we should do it together.”

Ivory teaches on the southwest side. Her class has 37 second graders and she’s one of the few teachers that has an assistant.

“Because my class is over capacity, any time my students go somewhere the TA goes with them to assist the other teachers. So we don’t have time for me training her to do interventions, just modeling lessons for her. We honestly don’t have any time together except our lunch which is 45 minutes.”

When it comes to class sizes, she said, “the smaller the better so there’s more time for individualized attention. We want to make sure that we reach all of our students. Even if I could just get it down to 25, that would be even better because right now I have 8 small groups. It’s an understatement to say that it’s difficult to make sure that all my students get the lessons at the level they need to. I really do love my kids and I want what’s best for them. My teaching conditions are their learning conditions. So all of it plays together.

“There needs to be an appropriate amount for them to do the work they need to do and not just one social worker for four schools. Honestly, asking for one social worker per school is very ambitious! That’s a lot of work for one person to do. Most certainly, one for multiple schools is not right. In the city of Chicago we have a lot of students dealing with trauma that full grown adults can’t even imagine.

“It’s too much to have one nurse spread over multiple schools. You have to provide a child their immediate needs before you can even think about test scores and data. I think it comes down to all of that. Meeting our students’ needs on more than one spectrum.”

About the city Democrats’ lying claim that there is no money for schools she said: “There’s so much money to build up certain parts of Chicago infrastructure. Of course we want to beautify our city, but at what cost? Why is it a priority above the youth of Chicago?”