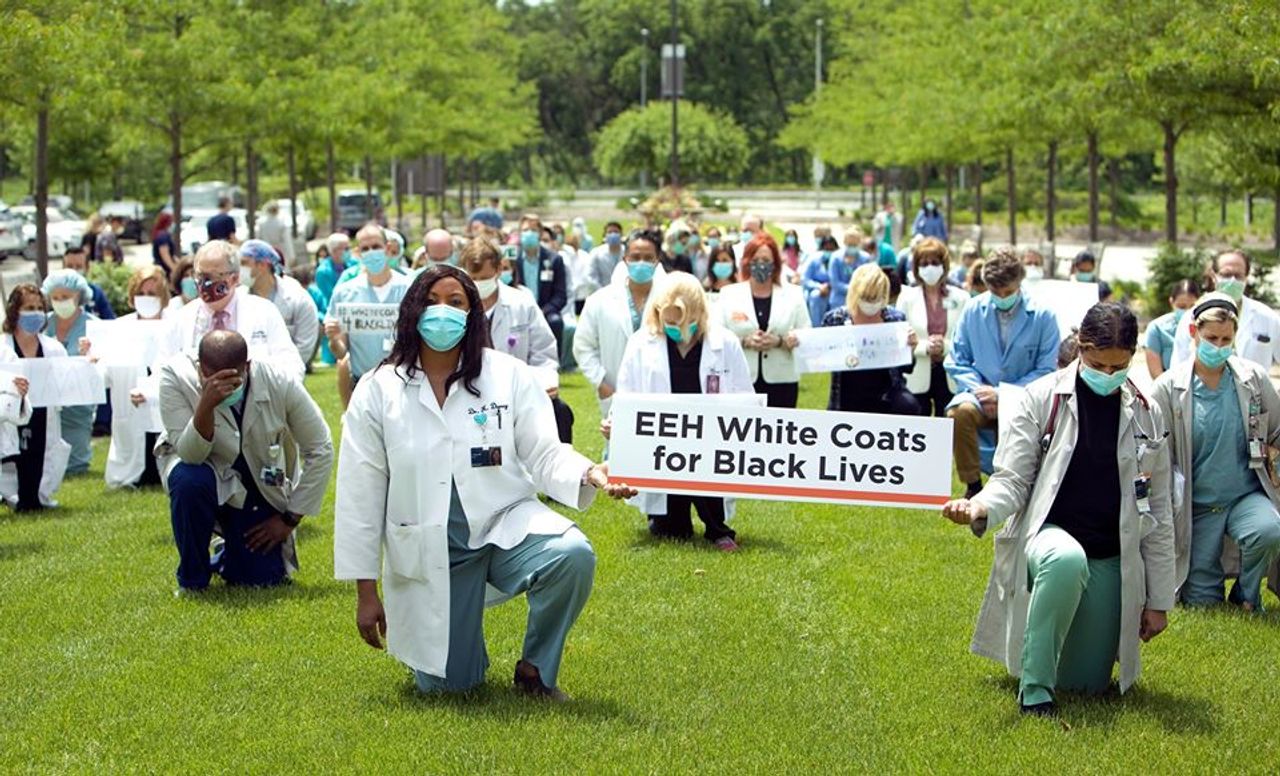 By Clara Weiss in the USA:

“Our system is so broken, it needs to be broken down and rebuilt”

Over the past 10 days, thousands of health care workers have joined the growing protest movement against police violence and racism in the US and internationally. Many have joined protests, including to provide medical care for demonstrators who have been violently attacked by police, while thousands more have staged demonstrations of support at their hospitals under the slogan WhiteCoatsforBlackLives.

No information has been released by the media about the total number of workers participating in these protests, and there has been only very limited national coverage. However, based on social media, it is clear that workers at hundreds, if not thousands, of facilities have been involved, spanning virtually all states in both rural and urban areas.

While the protests have focused on police violence and racism, underlying them is much broader social and political anger about social inequality, the criminal response by the government to the coronavirus pandemic, and opposition to both the threat of dictatorship and both big business parties.

Health care workers have been at the forefront of the fight against COVID-19 for months. However, their lives and health have been endangered by the criminally callous response of the government which has left them without adequate Personal Protective Equipment (PPE). At least 586 US health care workers have died from COVID-19, according to the latest count by the Guardian and Kaiser Health News, and over 62,000 have been infected. Meanwhile, almost 1.5 million workers in the health care sector have been laid off and tens of thousands have been furloughed, even as leading hospital chains received $1.5 billion as part of the bailouts of the major corporations and Wall Street.

The WSWS spoke to several medical workers in Illinois and Kentucky who have joined the protests or are working on organizing protests themselves. Their first names have been changed to protect their identities.

Kelly is an ICU [intensive care unit] nurse from Kentucky who has been treating COVID-19 patients for the past months. Now, on top of her intensive work schedule, she is organizing protests against police violence among medical workers in Louisville.

Explaining her motivation to do so, Kelly highlighted not only her opposition to racism but also pointed to the enormous amounts of money spent by the US on the military: “In 2015, military expenditures accounted for about 54 percent of our discretionary spending, according to The National Priorities Project. In contrast, education accounted for only 6 percent of the budget. To see our nation underprepared for a pandemic of this proportion was not surprising, it took many countries down. However, the perspective is changed vastly when we see the ability to mobilize police and military with such ease in just days.

“It is now months after our first case of COVID-19 and I’m still wearing the same N95 I’ve had for weeks (only because the strap broke on my previous one that I have had since the beginning, I was able to get an additional one). These obvious inequalities are right in front of us, we are living them in real-time.”

Kelly’s sentiments were echoed by Linda, a paramedic from Kentucky, who has joined protests in her city and has been providing medical care for protesters. She told the WSWS: “My motivations for participating are obviously that there is a deeply rooted problem with racism in the US, but also a larger problem with the militarization of our police. I work on the street level. I go into people’s homes and transfer patients between facilities. I see that our police are well-equipped for war with civilians, but I was only issued one N95 mask.

“I read the statistics and know that black people are dying at higher numbers in my state disproportionate to the population because they lack resources and health care. I know that people are poor, desperate and sick, and our government is brutalizing them in the street and billionaires in my country have profited from this outbreak while ignoring our suffering.”

The role of the police as a force deployed against workers is being broadly discussed by health care workers and among other sections of the working class on social media. One nurse from Kentucky described on Facebook how the police attacked teachers and students on a picket line, demonstrating for more funding:

“I once walked a picket line with elementary school teachers on strike. PUBLIC SCHOOL TEACHERS. There were also adorable little kids on the picket line. Obviously, it was peaceful … We were chanting about needing increased funding for little kids. Then the police showed up to help keep it ‘peaceful.’ They were there in full force, guns prominently displayed for all the 8-year-olds to see, being threatening, taking surreptitious photos of picketers, following people back to their cars.

“Every time a scab showed up, they’d push us roughly out of the way so the scabs could cross the picket line. A picketer ‘got too close to the car’ of a scab trying to drive through the line of teachers. A cop grabbed him by the back of the shirt, spun him around, and slammed him face-first into the wall while putting him in handcuffs. ‘Disorderly conduct.’ Just a few hours later, a scab rammed through the picketers with her car. The cops turned their backs and pretended not to see.” 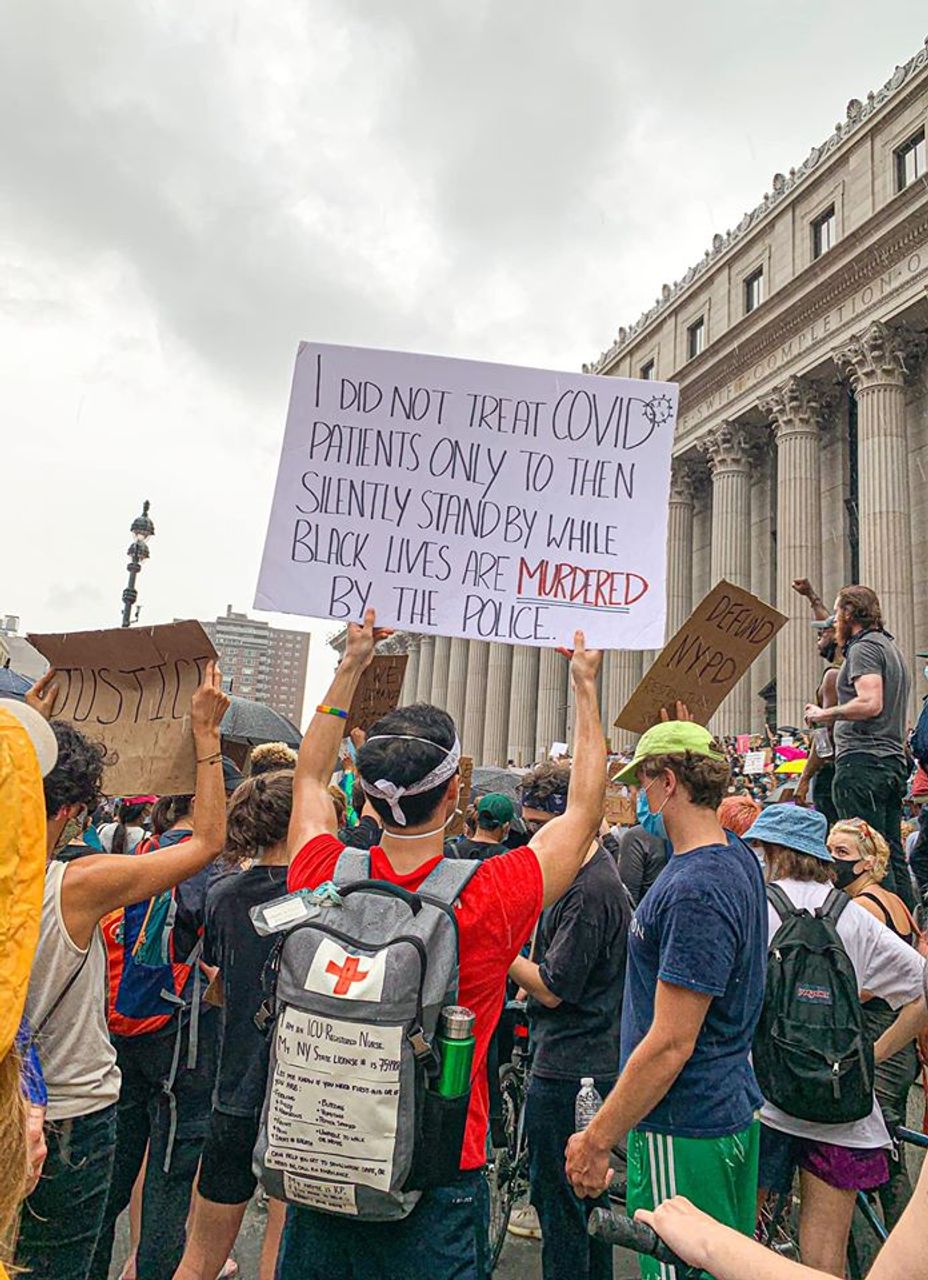 As the military and police have been mobilized to violently crack down and intimidate demonstrators, the international extension of the mass demonstrations has been encouraging for many workers and youth in the US. This weekend, millions of protesters in the US were joined by hundreds of thousands of workers and youth who protested in Germany, the UK, Australia, Austria and many other countries. Videos from these protests have been watched by millions on social media.

A nurse from Illinois who joined a demonstration at her hospital pointed to these protests and said, “I have heard about the protests in London and other places. The word is finally getting out. This is not just a problem in the United States. It is a worldwide problem. History shows us that it is a problem that is long overdue to be eradicated. I believe when we come to the other side, we will be stronger and united.”

Asked about the move by Trump toward dictatorship and the response by the Democrats, she said, “Trump’s move absolutely terrifies me. I am very concerned that he is going to take the opportunity and try to postpone the election.” Kelly and Linda expressed strong opposition not only to the moves toward dictatorship but the entire political system.

Kelly stated: “From the first day Trump took office he has been moving us toward a dictatorship, that’s how he operates. You look at the top 1 percent, there is no trickle-down effect, the money and power stay at the top. He wants desperately for our country to run that way, while he is the one in power … I think our two-party system is overwhelmingly flawed and to see any real advancements it needs to be disassembled. The entire political ring is a circus full of corporate sponsorships and overpriced goods for us to consume while we watch the show.”

Linda said: “Democrats have enacted another wave of the Patriot Act that would give Trump more police power. They are ineffective and the opposite side of the same coin, owned by the corporate elite. Our system is so broken, I don’t see a way forward while working within its parameters. It needs to be broken down and rebuilt.”