On the second day of the strike in Sudan, protest leaders say they have the upper hand and are threatening more strikes if the Military Transitional Council doesn’t return to negotiating table. So far, the council hasn’t reacted to the protesters’ demands, accusing the protest movement of being infiltrated by what are described as ‘anti-Sudanese’ elements.

THE SUDANESE military regime has once again shown its contempt for any real peace talks in the country, and its confidence that since it has the support of Saudi Arabia and Egypt, the key allies of the western imperialist powers in the region, it can do anything it wants, and literally get away with mass murder.

No sooner had the Ethiopian Prime Minister left the country in a situation where the African Union had already suspended the Sudan, the military moved to attack the workers, and savagely beat and arrest Sudanese bank, airport and electricity workers early on Sunday morning, just ahead of the launching of a general strike that the trade unions had called.

The Sudanese Professionals Association (SPA) confirmed yesterday that workers were under heavy attack from the military regime of the ruling Transitional Military Council (TMC). Pro-democracy campaigners had already said, before the Ahmed talks, that the military council could not be trusted, citing last Monday’s mass murder of up to 100 workers who were taking part in a sit-in strike in Khartoum.

However, offices and businesses, and workplaces across the the capital have now been occupied. There are also reports of gunfire as security forces seek to impose a reign of terror across the city. The protest leaders are now urging workers to stay at home and not to work and are saying that demonstrations are no longer possible because of the violent crackdown and savagery of the military.

However, the workers’ leaders are still insisting that the strike and occupation movement will only end when a civilian government replaces the military regime.

Meanwhile, the opposition politician Mohamed Esmat was detained on Friday as soon as his meeting with Ethiopia’s PM Ahmed concluded, his aides said. Ismail Jalab, a leader of the rebel Sudan People’s Liberation Movement-North (SPLM-N) group, and his spokesman Mubarak Ardol were also arrested early on Saturday.

This was the immediate response of the military regime to Ethiopian Prime Minister Abiy Ahmed’s attempt to bring the two sides back to the negotiating table.

On Wednesday, the SPLM-N said its deputy head, Yasir Arman, had already been arrested at his house in Khartoum. Esmat and Jalab are both leading members of the Alliance for Freedom and Change, an umbrella organisation of opposition figures, protest leaders and rebel groups. ‘This amounts to a practical response from the military council that effectively rejects the Ethiopian prime minister’s mediation effort’, Khalid Omar Yousef, an opposition alliance leader correctly said.

The TMC military are being emboldened because the US and UK’s allies in the region, that is Saudi Arabia, the UAE and Egypt are demanding that the uprising be crushed and egging the Sudanese military on to commit bigger outrages to defeat the revolution in the Sudan, before it spreads to Libya, Egypt, the Arabian peninsula and the Gulf States.

The Gulf States are pouring billions of dollars into supplies for the Sudanese military so that it can confront the revolution. Opposition activists say the feared paramilitary unit, the Rapid Support Forces (RSF), killed 108 people in the crackdown, with at least 40 bodies pulled from the River Nile in Khartoum last Tuesday. The RSF, formerly known as the Janjaweed militia, gained notoriety for brutal atrocities in the Darfur conflict in western Sudan in 2003.

A number of women arrested by the RSF said they were repeatedly beaten with sticks and threatened with execution. They said RSF troops told them to run for their lives, then opened fire. Other victims, they said, were forced to drink sewage water and were urinated on.

On Thursday, the African Union suspended Sudan’s membership ‘with immediate effect’ and warned of further action if power was not transferred to a civilian authority. The Sudanese workers and youth are showing immense courage with their determination to defeat the Sudanese military and to have a civilian government that can only rule as a workers’ government.

The powerful trade unions of the UK, the EU and the US cannot allow the Sudanese workers to fight alone against these massive odds and must give them full support. They must organise political strike actions to force the US and UK governments to stop arming Saudi Arabia and the Gulf States …

The trade unions must also demand that the UK Labour Party must pledge that it will stop selling arms to the Saudis and the Gulf states when it becomes the government and that it must recognise immediately the leadership of the Sudanese trade unions as the government of the Sudan. This is the way forward to win the workers’ struggle in the Sudan and to put an end to the reactionary feudal regimes in the Gulf.

Shops are shuttered in the usually busy Sudanese area of Omdurman as protesters started a general strike nearly one week after security forces launched a crackdown on a long-running sit-in site.

General strike against military regime brings Sudan to a standstill

An indefinite nationwide general strike brought cities across Sudan to a virtual standstill Sunday, nearly one week after security forces launched a counterrevolutionary bloodbath with an assault on a mass sit-in outside the defense ministry headquarters in Khartoum. The Central Committee of Sudan Doctors estimates that 118 protestors have been killed, including four on Sunday, and a further 784 wounded since the crackdown began last Monday.

Tens of thousands of Sudanese have been regularly gathering for months outside the defense ministry and protesting across the country as part of the popular movement that began in December 2018 demanding the end of military rule and the transfer of power to a democratically elected government.

The Transitional Military Council (TMC) seized power in a coup on April 11, ousting President Omar al-Bashir after months of mass protests in an effort to preempt a revolutionary overthrow of the entire military regime, which has been in power for three decades.

Dozens of protestors were forced off or thrown from the Blue Nile bridge by the RSF, some reportedly with concrete blocks tied to their bodies to ensure that they drowned and their bodies were not found. The RSF, formed out of the notorious Janjaweed militia, deployed the same brutal tactics in the heart of Khartoum utilized to suppress rebellions in Darfur and the country’s east.

The rampage came in the wake of Dagalo’s visit with Crown Prince Mohammed bin Salman in Saudi Arabia and trips by General Abdel Fattah al-Burhan, the head of the TMC and Sudan’s de facto ruler, to Abu Dhabi and Cairo, where he received pointers on drowning a revolution in blood from Egyptian dictator General Abdel Fattah El-Sisi.

While the Trump administration has raised concerns about the instability caused by the military crackdown, with its support, the main allies of American imperialism in the Middle East have been and continue to be key financial and political backers of the military dictatorship in Sudan. In turn, the RSF has sent thousands of its members

to fight in the Saudi-led assault on Yemen. The Saudi monarchy and Emirati sheiks have pledged $3 billion to prop up the TMC.

Outraged by the brutal RSF assault, millions across the country heeded the call of the Sudanese Professional Association (SPA) trade union for a movement of “civil disobedience” and “open political strike” against the ruling Transitional Military Council.

Photos and video posted on social media showed empty streets and shuttered markets in a number of state capitals across the country, from Damazin in Blue Nile to El Obeid in North Kurdufan, Wad Madani in Al Jazirah and Port Sudan on the Red Sea.

Metro Khartoum, an urban region with more than 5 million residents, was brought to a near standstill, with public transportation shut down and most stores, banks and offices closed.

A 20-year old protestor was shot and killed in Omdurman as security forces used tear gas and live fire to disperse demonstrations. Protestors erected barricades of bricks and tires in Khartoum North to blockade major roads and bridges. Travelers filled up the departure terminal up at Khartoum International Airport as most flights were cancelled. 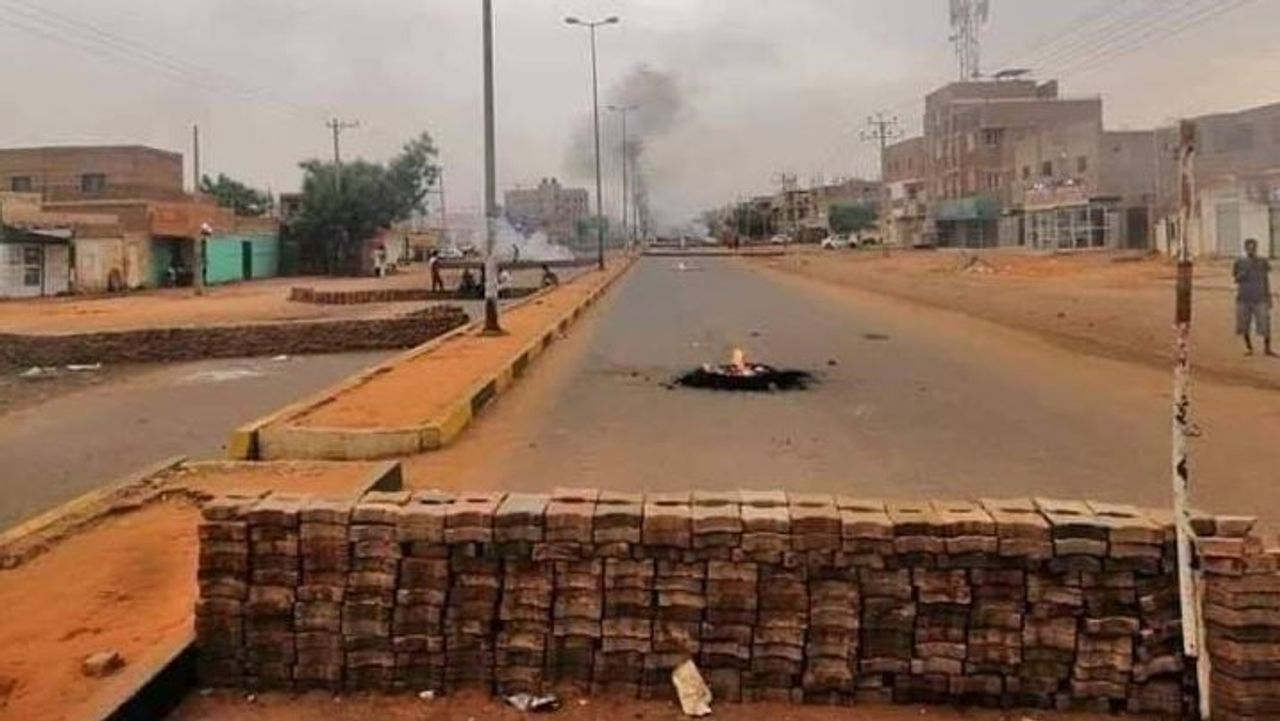 “We blocked the streets to send a message to those trying to steal our revolution that they will fail,” Emad Ibrahim, 25, a protester from Khartoum North told the AFP. “It is a long road ahead for us, but after the sacrifice made by our brothers who have been killed, we believe that we will achieve our goal.”

The military sought to break the strike movement by blocking social media, cutting off mobile access to the internet and arresting “essential employees”, including bank executives and airport and electrical utility workers and forcing them to work at gunpoint.

Despite this effort at intimidation, workers and professionals expressed their determination to continue striking until the junta is gone. “We will not go back to work until the [SPA union] announces the end of the strike”, Ahmad al-Noor, a 46-year-old private food company employee told Reuters. “Sudan must be governed by a civilian government.”

“The roadblocks prevented me from reaching the market to buy vegetables,” vegetable vendor Hassan Abdelrahim told the AFP. “This will impact my income, but when I look at these youngsters who are on the streets since six months, I’m not angry even if I lose my income.”

A statement released by the SPA declared that the civil disobedience campaign would continue until “a civilian government announces itself in power on state television.” The SPA is part of the Forces for Declaration of Freedom and Change (FDFC) civilian popular opposition alliance, which has been engaged in talks with the TMC over a transfer of power.

The talks broke down last month over the question of whether a military or civilian figure would head a joint regime during a three-year transition period to prepare for new presidential elections.

An effort by Ethiopian Prime Minister Abiy Ahmed to revive talks between the TMC and the FDFC coalition was spurned by the military over the weekend, with the arrests of Mohamed Esmat, director of the Khartoum branch of the Central Bank of Sudan, and Ismail Jalab, secretary general of the Sudan People’s Liberation Movement-North. Esmat and Jalab, leading representatives of the FDFC, were detained shortly after meeting with Ahmed. …

With the first day of the general strike, the working class has shown its collective strength. What is required now is the establishment of independent and democratic organs of working class struggle to mobilize the working masses in Sudan to take power, establish a workers’ government and seize the country’s immense wealth as part of an international struggle for socialism.