The head of Sudan’s Transitional Military Council says there will be no more negotiations with opposition groups and is calling for elections to be held within nine months.

Abdel Fattah al-Burhan has also apologised for the violent crackdown on Monday, which saw at least 35 people killed, according to protest groups.

But protesters say it’s too little, too late and want an immediate transfer of power to civilians. Al Jazeera’s Alexi O’Brien reports.

Security forces in Sudan launched a bloodbath early Monday morning, using live ammunition to break up a more than five-month-old sit-in outside the country’s defense ministry in Khartoum, where tens of thousands of Sudanese have regularly gathered to demand an end to military rule and the transfer of power to a democratically elected government.

The Sudanese Doctors’ Committee put the confirmed death toll late Monday at over 30 and said that at least 116 people had been wounded. At least one of those who were killed is a child, an eight-year-old cut down by gunfire. The casualty figures are expected to rise dramatically, with many protesters still unaccounted for, and reports of security forces dumping bodies into the Nile River. Similar murderous repression reportedly has also been unleashed against protesters outside of the Sudanese capital. 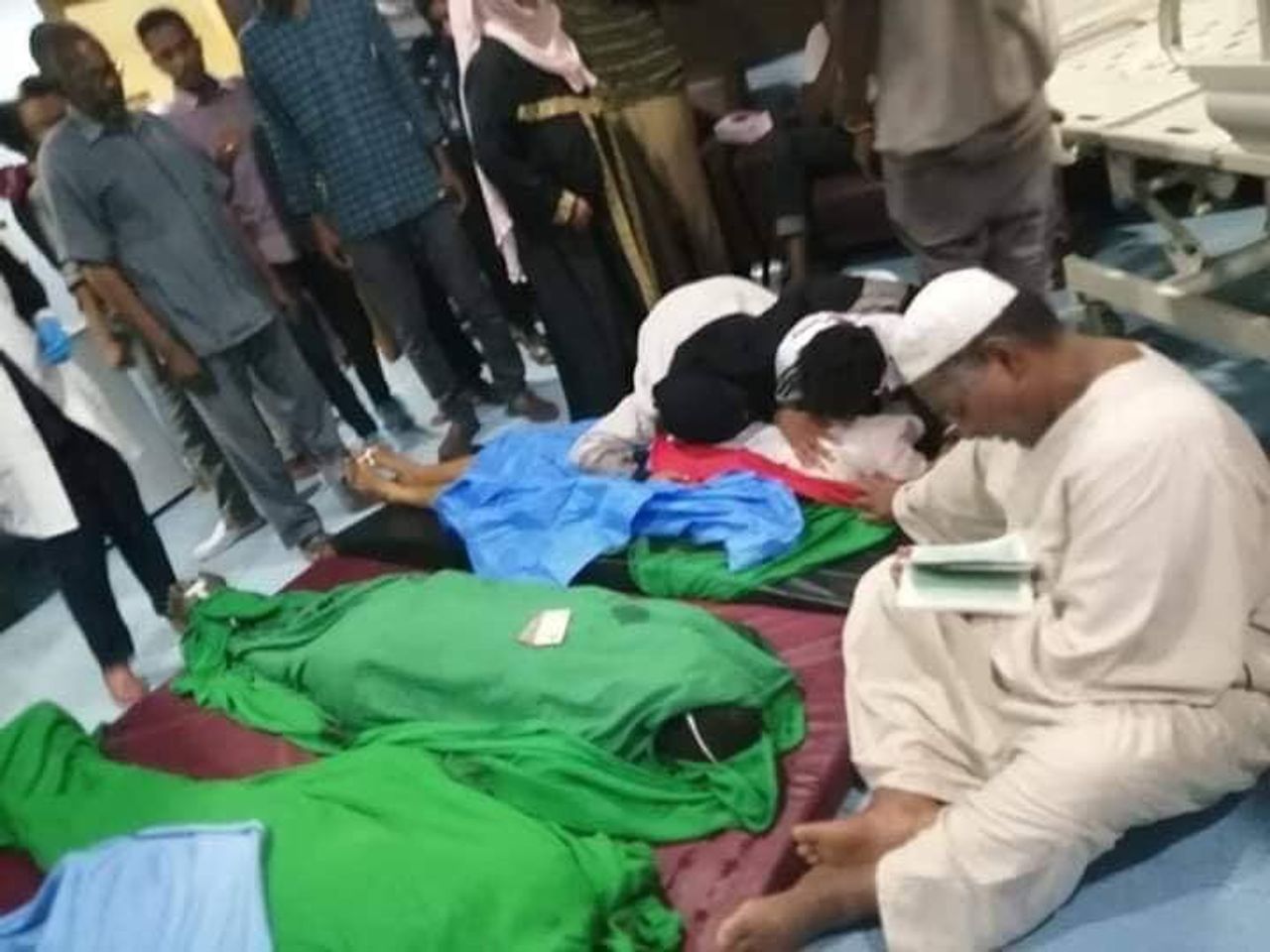 Troops from various military and police units descended upon the encampment, led by soldiers wearing the desert camouflage fatigues of the Rapid Support Force (RSF), a brutally repressive paramilitary outfit that has been used by the regime in Khartoum to suppress regional rebellions in Darfur and in the east of the country. The RSF is led by Lt. Gen. Hamdan Dagalo (popularly known as “Hemeti”), the deputy chair of the country’s currently ruling junta, the Transitional Military Council (TMC), and widely viewed as an aspiring dictator.

And a pal of the regime of the Saudi crown prince, because he sends Sudanese child soldiers to help the Saudi bloody war against the people of Yemen.

Photographs were also posted of snipers deployed in high rise buildings overlooking the protest site. They opened fire on anyone attempting to record the events with cellphone cameras.

One protester recounted: “They shot me in my right thigh because I was carrying someone with a bullet wound to his head … An officer hit me with his gun and I dropped the man I was carrying. He then stepped away and shot him again in the head and told me ‘now you can go bury him.’”

In addition to shooting and beating protesters, the troops burned down tents erected at the sit-in and sealed off the area with machine gun-mounted trucks.

There were also reports of armed security forces besieging local hospitals where the wounded had been taken, firing live ammunition inside the facilities and blocking volunteers and doctors from entering. Video shared by doctors showed security forces beating medical staff at the Royal Care Hospital in Khartoum.

Protesters driven out of the site outside the defense ministry continued to demonstrate and erect barricades in the streets of Khartoum and the neighboring city of Omdurman. In neighborhoods throughout Khartoum, people poured into the streets to protest the junta’s actions, barricading streets with bricks and burning tires and blocking bridges. Similar mobilizations were seen in Omdurman. Firing by security forces continued to be reported in both cities as well as elsewhere in Sudan. Among the chants heard were: “If you disperse the sit-in, we will protest in every street” and “You’ll have to kill us all.”

Shortly before the military onslaught against the protesters, the regime cut off power to the area. The internet was also shut down throughout Sudan.

The ruling Transitional Military Council (TMC) issued a preposterous statement claiming that the crackdown had targeted only “unruly elements” from a neighborhood adjacent to the protest site, nicknamed “Colombia” and known for a high crime rate.

He went on to call for a “return to negotiations” between the junta and opposition groups organized under the umbrella of the Forces for the Declaration of Freedom and Change (FDFC) as “the quickest way to resolve the problem.”

In the face of mass protests, the TMC seized power on April 11 in a preemptive coup against the 30-year ruler of Sudan, President Omar al-Bashir. Its aim has been to preserve the military-dominated regime by ousting its chief.

The assault on the protest had been openly prepared for days after negotiations between the junta and the civilian opposition front broke down over whether a military or a civilian would head a transitional regime during a proposed two-year transitional period in preparation for presidential elections.

Demonstrators remained in the streets, rejecting the protracted transition and demanding an immediate end to the ruling junta.

On Saturday, the ruling TMC issued a statement declaring that the “sit-in has become a threat to the country.”

While Washington issued a pro-forma statement from an undersecretary at the State Department condemning the “coordinated and unlawful violence” in Khartoum and a vague opinion that the Sudanese people “deserve a civilian-led government that works for the people, not an authoritarian military council that works against them”, the reality is that the military crackdown was prepared in the closest collaboration with the principal US allies in the region.

The shift toward iron-fisted repression immediately followed a tour conducted by the head of the TMC, Gen. Abdel Fattah al-Burhan, and his deputy, Lt. Gen. Dagalo, of the three countries that have been the main backers of the military regime, which are also Washington’s chief allies in the Arab world: Egypt, Saudi Arabia and the United Arab Emirates.

It is clear that Cairo, Riyadh and Dubai—with Washington’s tacit blessing—gave the green light for the bloodbath.

The assault on the sit-in recalls the even bloodier crackdown organized by Egypt’s dictatorial ruler Gen. Abdel Fattah el-Sisi in Cairo’s Rabaa Square in 2013, killing at least 1,000 people, including women and children, who were protesting the Sisi-led coup that toppled Egypt’s elected president, Mohamed Morsi. Having drowned in blood the Egyptian revolution that overthrew the 30-year US-backed dictatorship of Hosni Mubarak in 2011, el-Sisi has no intention of seeing a similar revolutionary upheaval struggle unfold unhindered in Egypt’s southern neighbor, Sudan.

The Cairo regime issued a statement demanding that “all Sudanese sides commit to calm, self-restraint and return to the negotiating table.”

As for Saudi Arabia and the UAE, their ruling monarchs have pledged $3 billion to prop up Sudan’s ruling junta. The Sudanese military has in return sent troops to support Saudi Arabia’s and the UAE’s near-genocidal war against Yemen.

After the meeting in Riyadh, Lt. Gen. Dagalo stated that “Sudan stands with the kingdom against all threats and attacks from Iran and the Houthis (Yemen’s anti-Saudi rebels).”

Such allegiance undoubtedly trumps all other considerations in Washington, where the focus of Middle East policy has been the consolidation of an anti-Iranian axis in preparation for a new and far more dangerous US imperialist war of aggression in the region.

At the same time, there is fear within US imperialist circles as well as among the ruling strata throughout the Middle East and North Africa that the popular revolt in Sudan will feed the growing wave of strikes and mass protests in Algeria, Tunisia, Morocco and throughout the region.

The only means of defeating the counterrevolutionary conspiracies of Washington, its regional allies and the Sudanese ruling clique lies in an independent struggle led by the working class to take power and seize the country’s wealth as part a broader struggle of the working class throughout the region and internationally to put an end to capitalism and build a socialist society.