This 22 April 2019 AFP news agency video says about itself:

Authorities comb through St Sebastian’s church in Sri Lanka’s Negombo as the death toll from Sunday’s bomb blasts that ripped through churches and luxury hotels in the country rose dramatically Monday to 290.

By K. Ratnayake in Sri Lanka:

At least 290 killed in terrorist bomb attacks in Sri Lanka

At least 290 people have been killed and around 500 injured in a series of powerful bomb blasts yesterday in Sri Lanka. In a co-ordinated attack between 8.45 a.m. and 9 a.m., unidentified terrorists struck three Christian churches and three luxury hotels frequented by tourists. Among the dead are some 35 foreigners, including from the US, European countries, China and Japan.

The three churches—St. Anthony in Colombo, St. Sebastian in Negombo to the north of the capital and the Zeon Church in Batticalao on the east coast of the island—were packed for Easter Sunday services. The blasts ripped off the roofs and left body parts strewn among the rubble. The hospitals, particularly in Negombo where the death toll was the highest, were overwhelmed by the large number of injured, many of whom are in a serious condition. 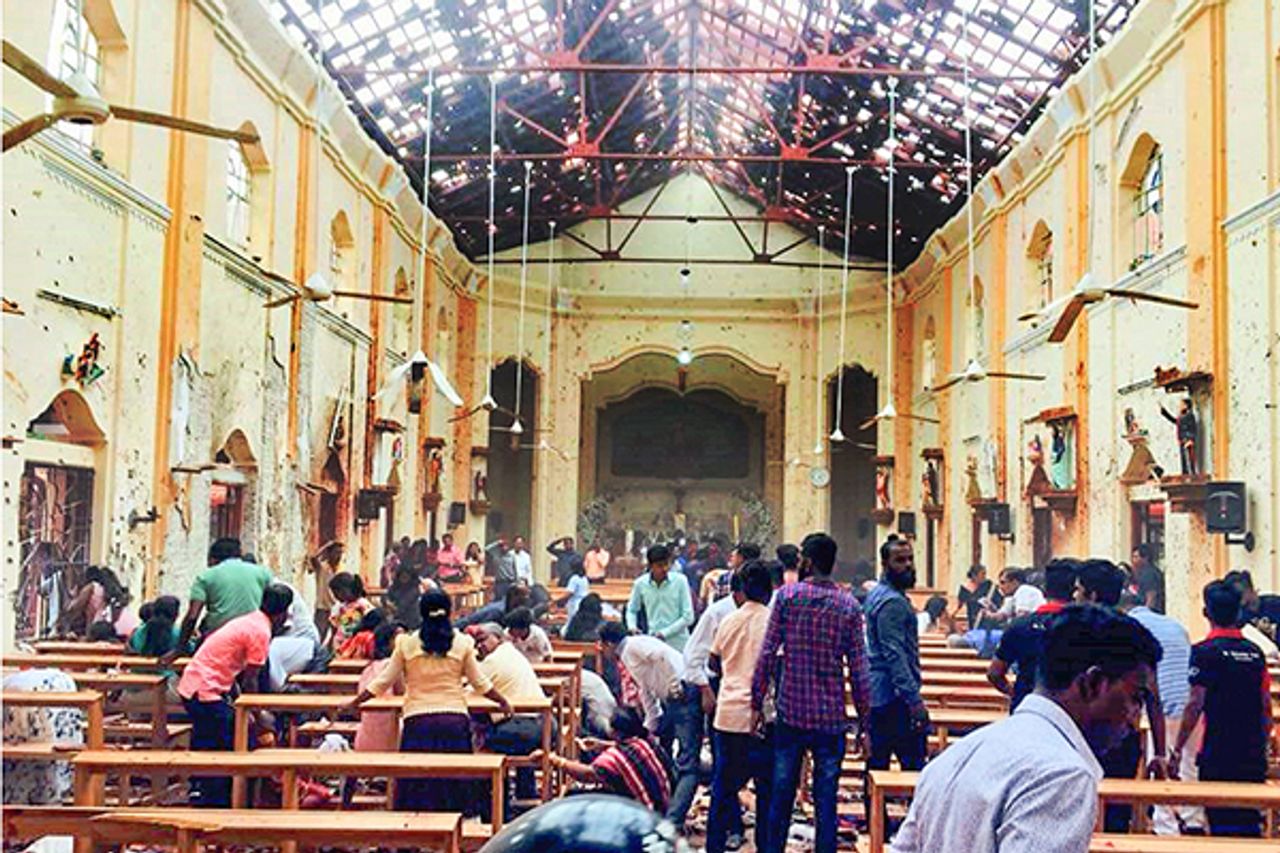 The three luxury hotels—the Shangri-La, Cinnamon Grand and Kingsbury—are all in Colombo. Two further blasts in the capital several hours later claimed more lives—one in the suburb of Dehiwela killed two people and the second in Dematagoda killed seven, including three police officers.

The Socialist Equality Party (Sri Lanka) unequivocally condemns this barbaric murder of innocent people, including children and women. Whoever is responsible for this heinous crime and whatever their motives, it will be exploited by the political establishment to strengthen the state apparatus and further attack basic democratic rights.

The government immediately imposed a nationwide block on social media sites, including Facebook, Instagram, YouTube, Snapchat, WhatsApp and Viber, claiming that they had been used to circulate “false news reports.” While saying the shutdown would be temporary, it is part and parcel of moves by governments internationally to censor the internet so that only government-approved news is readily available.

No organisation or individual has so far claimed the responsibility for the terrorist attacks. State minister for defence affairs and media, Ruwan Wijewardena, said the government knew the “identity of the culprits” but would not elaborate. The police have arrested 13 people but have not revealed their identity. Even the nature of the bombings is not clear, but there is some evidence that suicide bombers were involved.

Agence France Presse has reported that the Sri Lankan government and police had received a warning 10 days before that suicide bombers planned to attack prominent churches. The intelligence alert to top police officers declared: “A foreign intelligence agency has informed that the NTJ (National Thowheeth Jamma’ath) is planning to carry out suicide attacks targeting prominent churches as well as the Indian High Commission in Colombo.”

Neither the police nor the government took any action to warn the public of an impending attack. Nor there is any evidence that the police took any measures to prevent the bombings. Yet the alert was quite specific and Easter is an obvious time when churches would be full.

Prime Minister Ranil Wickremesinghe yesterday acknowledged that there had been a warning from an unnamed foreign intelligence agency. He claimed, however, that he and his ministers did not know about the alert. He indicated that there would be an inquiry as “there had not been adequate attention [paid] to the information.”

National Thowheeth Jamma’ath is an Islamist organisation based in Sri Lanka that is suspected of having links to Islamic extremists internationally. At this stage, however, one cannot rule out other possibilities.

The Colombo political establishment, which waged a brutal three-decade long war to defeat the separatist Liberation Tigers of Tamil Eelam (LTTE), has close connections to Sinhala Buddhist supremacist groups, which have a history of attacks on Christians and Christian churches, as well as the island’s Tamil and Muslim minorities. In many cases, the police have simply turned a blind eye to such attacks.

The government is desperate to deflect rising anger over the bombings. In his comments, Wickremesinghe hinted that President Maithripala Sirisena was responsible for not taking action to prevent the attack. Sirisena took over the law and order ministry, which includes the police, last December as part of the bitter rivalry between himself and the prime minister. The president, as defence minister, already has control of the country’s three armed forces.

The opposition, led by former President Mahinda Rajapakse, yesterday condemned the attack but sheeted home the blame to the government. The Rajapakse government was responsible for the brutal end to the war against the LTTE which involved the killing of tens of thousands of civilians in the final military operations, as well as hundreds of “disappearances” by military-connected death squads.

Rajapakse has defended the “war heroes” against any charges of war crimes and is looking for the military’s support in his bid to return to power. Yesterday, he declared that the attack was a “dire consequence that innocent people have to face because the government has paralysed the intelligence officers and officers of the three-armed forces.”

Both the governing and opposition parties, however, were responsible for prosecuting the communal war against the island’s Tamil minority and for vastly expanding the military and state apparatus as well as its police state powers. The government will undoubtedly exploit yesterday’s bombings to ram through its Counter Terrorism (CT) Bill, which replaces the notorious Prevention of Terrorism Act and retains the bulk of its sweeping, anti-democratic powers.

In separate statements, Sirisena and Wickremesinghe urged people to be “calm” as the security measures were put into force—after the bombings. As well as the block on social media, police special task force officers were deployed to guard Colombo railway station, Katunayake International Airport and other places. Several hundred soldiers have been deployed onto the streets of Colombo and a curfew has been imposed.

World leaders yesterday rushed to denounce the terrorist attack. US President Donald Trump condemned the “horrible terrorist attacks,” offered “heartfelt condolences” and declared that the US stood “ready to help.” British Prime Minister Theresa May also decried the attacks saying the “violence was truly appalling.” Indian Prime Minister Narendra Modi declared that “there is no place for such barbarism in our region.”

Hypocrisy knows no bounds! The US and its allies are responsible for criminal wars in the Middle East, Central Asia and North Africa that fueled Islamic extremists, if they were indeed responsible for yesterday’s bombings. Washington backed successive Colombo governments that waged the island’s brutal war that created communal tensions and hatreds that Sri Lankan elites continue to stir up and manipulate.

Amid a rising tide of working-class struggles, the ruling classes internationally are whipping up anti-immigrant xenophobia and deliberately nurturing fascist parties and organisations. Last month, the Australian fascist Brenton Tarrant shot dead 50 people, including women and children, in mosques in Christchurch, New Zealand. Despite Tarrant’s connections in far-right circles internationally, the police and intelligence services claim that they had no forewarning. The response of the government in Wellington has been to blame the internet and censor websites.

The government in Sri Lanka will use yesterday’s bombings for the same purpose. Over the past year, there has been a wave of strikes by workers and protests by students, farmers and the poor against the government’s austerity measures. The police-state measures put in place on the pretext of fighting terrorism will inevitably be used against the working class.