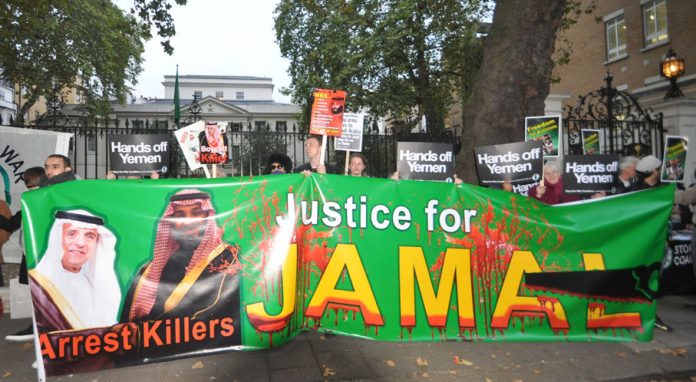 This photo shows a demonstration outside the Saudi embassy in London, England on October 25th 2019 demanding that the killers of critical Saudi journalist Jamal Khashoggi be arrested and for the British Conservative government to stop arming the Saudi regime for its war on Yemen.

STOP British bombs from fuelling the crisis in Yemen, demands Oxfam. The charity warns in a statement: ‘The war in Yemen has been brutal. Since 2015, deadly clashes and airstrikes have killed 3,980, injured over 33,000, and forced 3.1 million to flee their homes.

‘At the same time, food shortages and rising food prices mean that the country stands on the brink of famine. ‘Saudi Arabia’s airstrikes have caused 60% of civilian deaths in the conflict. Meanwhile our government is allowing weapons to be exported from the UK to Saudi Arabia.’

Elsewhere in Hudaydah province, Yemeni forces killed some 25 Saudi-led Sudanese mercenaries in the vicinity of Hudaydah city. Saudi Arabia and its allies have intensified a brutal offensive on Hudaydah – whose port is the country’s only conduit to the outside world under the Saudi-led blockade – killing at least three people and injuring 35 others.

According to Yemen’s al-Masirah television, medical sources said the Saudi airstrikes killed two people and wounded 24 others on the outskirts of the Red Sea port city of Hudaydah on Monday.

Earlier in the day, five inmates at Hudaydah’s central prison were injured as Saudi warplanes launched several air raids on the prison. A girl was also wounded and a mosque was damaged in an artillery attack launched by Saudi-backed mercenaries in the province.

Saudi-backed militants also conducted an attack on a Yemeni factory, leaving a worker dead and five others injured. Al-Masirah released footage showing residential buildings targeted in the district of Hali in Hudaydah on Monday.

The Saudi-led coalition and militia groups loyal to Yemen’s former president, Abd Rabbuh Mansur Hadi, have been pushing over the past several months to capture the city of Hudaydah, which is seen as the main entry point for food imports and aid relief needed by millions in the war-torn country.

The escalating violence in Hudaydah comes despite a call by the United Nations (UN) for the resumption of peace talks and a ceasefire in Yemen.

Officials from the United States – which is itself aiding the Saudi-led coalition in the war on Yemen – have also called for a ceasefire in the country, amid mounting civilian casualties and the creation of the world’s worst humanitarian crisis there. Despite that, the Saudi-led coalition has purportedly sent 10,000 new forces to the Red Sea coast for the new offensive on Hudaydah.

Some observers see the intensified Saudi-led offensive on Hudaydah as an attempt to gain the upper hand in potential talks, especially after a call for a ceasefire by the coalition’s main ally, the US.

Meanwhile, speaking at a press conference in New York City on Monday, the UN secretary-general’s spokesperson Stephane Dujarric said: ‘Conflict has escalated significantly around Hudaydah City over the weekend, including increased clashes and air strikes as well as artillery shelling.’ He stressed that affected areas are ‘primarily on the southern and eastern outskirts of Hudaydah’.

Dujarric said humanitarian aid had been provided to nearly 570,000 displaced people in Hudaydah since the start of the Saudi-led offensive in the province last June. ‘Since June 1, more than 570,000 people have been displaced by conflict across Hudaydah Governorate; the UN and its humanitarian partners have reached nearly all these people with emergency relief packages,’ he said.

The humanitarian situation in Yemen is worsening, with millions of children at risk of starvation and fighting intensifying despite international pressure for a cease-fire in the country’s civil war, according to a senior United Nations official who last week visited the rebel-held port of Hudeidah. Geert Cappelaere, the regional director for UNICEF, says Yemen is a ‘living hell’ for children.

In addition to creating shortages of food and clean water, fighting has caused the breakdown of Yemen’s medical system, including immunisations, leading to fatal outbreaks of measles and diphtheria. ‘The reason is the economic crisis, the devaluation of the rial and the fact that most commodities are not affordable any more for the most vulnerable people’, Cappelaere told NPR on Sunday in Amman, Jordan.

The UN has estimated that up to 14 million Yemenis – roughly half the country’s population – will suffer severe food shortages in the next few months. The United Nations International Children’s Emergency Fund plans to increase assistance in Yemen, including emergency cash payments to the most vulnerable families, Cappelaere said. Starting in December, it expects to provide monthly payments to 131,000 teachers who have not been paid for two years.

According to the UN, half of Yemeni children under five are chronically malnourished. It says 400,000 children are so malnourished that they will likely die without intervention. Cappelaere, formerly based in Yemen, said that vaccination levels had dropped to 55 per cent of the child population, down from 70 per cent before the war.

He said the front lines of fighting in Hudeidah last week were less than a mile away from Yemen’s largest hospital. …

The UN Security Council is expected to meet this month to discuss the Yemen conflict.