This 16 August 2017 video from the USA is called Massive Candlelight Vigil Held For Heather Heyer In Charlottesville, Virginia.

By Carla Herreria in the USA:

Video Shows Man Shooting At Crowd During Charlottesville Rally, With No Police Response

The ACLU documented the incident two weeks ago, and the man has now been arrested in connection with it.

A man attending the white supremacist rally in Charlottesville, Virginia, earlier this month fired his gun in the direction of a black counterprotester who was holding a torch, and police in their vicinity did not seem to respond.

As seen in the footage below, a man in a blue sleeveless shirt, a green vest and a bandana on his head pulls out a gun and aims it at a counterprotester, who is off camera and appears to be holding a makeshift lit torch. The first man appears to yell a racial slur at the black man, then fires the gun toward the ground in the direction of the counterprotesters.

The shooter then leaves the scene by joining a line of white supremacist protesters and walking past law enforcement officers, who were standing behind metal barricades about 10 feet away.

Police arrested Richard Wilson Preston, 52, in connection with the incident in the video above, the Daily Progress reported on Saturday. Wilson was charged with discharging a firearm within 1,000 feet of a school during the so-called “Unite The Right” rally on Aug. 12. He is in custody in Towson, Maryland.

Rosia Parker, a Charlottesville activist who was there when the man fired his gun, told the New York Times that police did nothing when the shooting occurred.

“We all heard it and ran ― I know damn well they heard it,” Parker told the Times, referencing the police who were standing behind the barricades. “They never moved.” …

In the aftermath of the violence in Charlottesville, the ACLU of Virginia has called on Charlottesville police to release body camera footage from the rally showing any civil rights violations similar to the one in the video.

According to the ACLU’s official statement, the video of the shooting is “consistent with our regular calls” for law enforcement agencies to release footage from the protests “that depicts any incident of public concern.”

The video was discovered while ACLU staffers were reviewing footage that staff and volunteers documented at the Charlottesville rally. The group turned in the video to the FBI on Aug. 17 and sent copies to the Virginia State Police and Charlottesville Police Department on Aug. 20. A person familiar with the video told HuffPost the ACLU refrained from making the video public until an arrest was made.

Only eight people were arrested on the day that violence broke out between white supremacists, fringe groups and anti-racism protesters in Charlottesville, according to the Times. Among those arrested was James Fields, a 20-year-old white supremacist who killed 32-year-old Heather Heyer and injured dozens of others when he rammed his car into a group of counterprotesters.

Two other arrests were made in connection with another violent crime caught on video that took place during the rally. Police arrested Daniel Patrick Borden, 18, and Alex Michael Ramos, 33, in connection with the beating of Deandre Harris, a black 20-year-old who was protesting the white supremacy rally.

A mob of white supremacists beat Harris with metal poles in a parking lot near police headquarters during the rally, leaving Harris bloodied, with a broken wrist, deep gashes to the head and a chipped tooth. The assault on Harris was filmed and shared widely on social media.

By Alessandra Freitas in the USA:

“You see something like this, you know, it brings back memories and I’m concerned about what could happen in this country.”

Shock and anger were common feelings for most Americans who followed the recent tragic events in Charlottesville, Virginia.

To Jack Rosenthal, the hate-filled imagery was something he never thought he’d see again, at least not in the United States.

Rosenthal is one of 10,000 Romanian refugees who came to America after World War II. At 88 years old, he still mourns the loss of seven family members who died in the Auschwitz concentration camp. He was the only one to survive.

He was born and raised in a farming village in northern Romania. “Altogether in my village, there were 26 Jewish families,” Rosenthal told HuffPost. Most of them didn’t survive either.

He was 16 when he was taken to the German Nazi concentration camp in occupied Poland. Later, he was transferred to Buchenwald, another camp near Weimar, Germany, where he was forced to work for the Nazis ― the only reason he was kept alive until U.S. military forces began to evacuate the camp’s 28,000 prisoners in 1945. He came to the U.S. hoping to find a new beginning.

“After I was liberated, I thought to myself the world has learned what terrible traces hate can bring to humanity,” he said. “And now this gives me a depressing feeling because it’s happening again, and it’s happening now.”

The successful real estate agent watched the protests from his home in Roslyn, New York, where he lives during the warmer months of the year. In the winter, Rosenthal flies to Florida.

Decades later, he remembers how hard it was to get settled in the U.S. while dealing with the trauma from the war. “When I came here, I used to get really bad nightmares and I would get up in middle of the night not being able to go back to sleep,” he said.

Those days of lingering fear and uncertainty felt much closer after watching neo-Nazis rage during the violent demonstrations in Charlottesville, he said. But after all the anti-Semitic speeches and the deadly car attack, it was one particular detail that caught Rosenthal’s attention.

He noticed it while reading about a Aug. 14 court hearing for James Alex Fields Jr., the man accused of plowing his car into a crowd of counterprotesters at the white nationalist rally, leaving a 32-year-old woman dead and injuring at least 19 other people. The article included a photo of Matthew Heimbach, who had helped promote the Unite the Right rally in Charlottesville, voicing his displeasure outside the courtroom after a judge denied bail for Fields.

The white supremacist’s T-shirt was the first thing Rosenthal saw. On the shirt was a picture of Corneliu Zelea Codreanu, a pre-WWII leader of the Romanian fascist Legion of Saint Michael the Archangel and the Iron Guard political party, which were both linked to the [German] Nazi party. 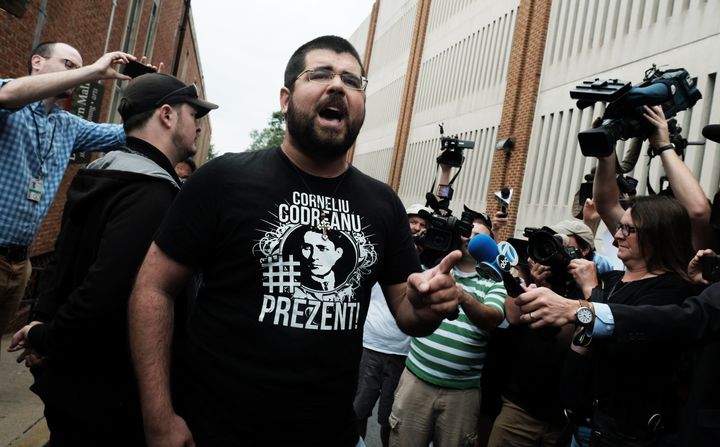 Codreanu was the face behind pogroms in Romania. The large-scale violent riots killed tens of thousands of Romanian Jews during the 1930s leading up to the Holocaust.

“I recognized the name right away,” Rosenthal said. “You see something like this, you know, it brings back memories and I’m concerned about what could happen in this country,” he said.

The groups behind the Unite the Right rally are not the only ones of their kind. According to a February report from the Southern Poverty Law Center, at least 917 hate groups exist throughout the country.

Many Americans were concerned when President Donald Trump failed to immediately condemn white supremacy in responding to the Charlottesville violence. Instead, Trump blamed both sides of the protests ― a point he repeated on Tuesday.

“You cannot compare fascism and Nazis to the other people protesting. Maybe there are people on both sides who are misguided, but there is simply no comparison,” Rosenthal said.

And he reminded us that the consequences of going through horrific violence never really end. “It’s 70 years after the war and it still has a tremendous impact on me,” he said. “It’s something I’ll never forget and that’ll always be with me as long as I live.”