On January 23 2013 Eva Schloss, step-sister of Anne Frank was invited by the Chabad group at California State University Northridge to tell her story of survival in the early years of occupation in Amsterdam and how the Diary of Anne Frank came to be published. This one time event was presented to “filled to capacity” auditorium of both young and old. A rare event for those who would rather learn from history, then repeat it.

A win for the Republican frontrunner in the presidential elections would be a ‘complete disaster’, Eva Schloss says

Anne Frank’s step-sister has said Donald Trump is “acting like another Hitler by inciting racism”.

Eva Schloss – whose mother married the father of the German born diarist who became one of the most well known Jewish victims of the Nazi regime – spoke out about the would-be Republican presidential candidate in an interview to mark Holocaust Memorial Day.

“If Donald Trump became the next president of the US it would be a complete disaster,” Ms Schloss told Newsweek.

Criticising the current British, American and Canadian refugee policies, Ms Schloss said: “Fewer people would have died in the Holocaust if the world had accepted more Jewish refugees.”

It is “even harder for today’s Syrian refugees,” Ms Schloss said, because they have “a very different culture”.

As “assimilated” European Jews, Schloss’ family was still “treated as if we had come from the moon” when they arrived in the Netherlands in 1938, she said.

“I was shocked that I wasn’t accepted like an ordinary person,” she said.

Her family fled Austria in 1938 after it was annexed by Nazi Germany, settling in Amsterdam where they knew the Franks.

Both families went into hiding in 1942, but were betrayed and taken to concentration camps two years later. While Ms Schloss was liberated from Auschwitz in 1945, Anne Frank died of typhoid weeks before her camp, Bergen-Belsen, was reached by Allied troops.

Anne Frank and her family would have lived, Ms Schloss suggested, had the US accepted Otto Frank’s visa applications in 1940.

“He tried everything to save his family from the Holocaust…but his request was rejected,” she said.

“The situation today is worse than it was under Hitler because at that time all the Allies – the US, Russia and Britain – worked together to combat the terrible threat of Nazism. If we don’t work together, the world will never be able to resolve the threats it faces today.”

‘Don’t Stand By’ is the theme of this year’s Holocaust Memorial Day, but “more people than ever are being bystanders”, said Ms Schloss.

“We haven’t really learnt anything—I’m depressed by the current situation.”

She is not the first to compare Donald Trump to Hitler.

Following the presidential nominee’s December call for a ban on Muslims entering the US, Philadelphia Mayor Michael Nutter accused Mr Trump of taking “a page from the play book of Hitler”, saying his comments “engender a level of fear mongering that we have not seen literally since the 1930s and 1940s”.

“You have people who were scared the economy was bad – they want someone to blame,” she said.

The Philadelphia Daily News responded to Mr Trump‘s call for a ban with a cover that punned on Führer, the German word for ‘leader’ and Hitler’s title. 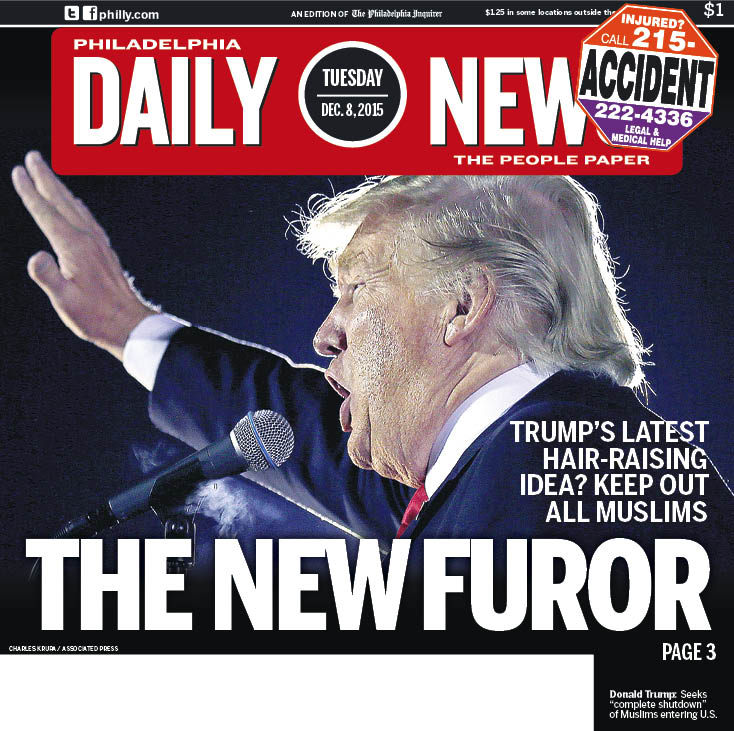 “I remember how upset the world was when the Berlin Wall was erected in 1961,” Schloss said. “And now everybody is building walls again to keep people out. It’s absurd.”

Donald Trump is not only infamous for attacking, eg, Muslims and African Americans. He also wants to deport Mexicans and Mexican Americans, whom he smeared as ‘rapists’. Ironically, about a hundred years ago, Jews who had to deal with anti-Semitism in Europe, jokingly called themselves ‘Mexicaner’ (Mexicans); derived from Yiddish language ‘’s meg sie kaner‘, nobody likes them.

DESPITE APPEALS FROM O’REILLY, TRUMP VOWS NOT TO APPEAR AT DEBATE TONIGHT “Bill O’Reilly wants Donald Trump to be the bigger man in his ongoing feud with Fox News, but Trump is promising an ‘eye for an eye’ instead.” Take a look at why Trump’s latest move is another example of him “hacking the media,” and here’s what the Republican debate will look like without him. [Ed Mazza, HuffPost]

ARIANNA HUFFINGTON: ‘CALLING ALL TEENS WHO DON’T WANT TO GROW UP IN DONALD TRUMP’S AMERICA’ “We’re launching a contest for teens to tell us: why don’t you want Donald Trump to be president? Because as we approach this election, it’s more important than ever to hear the voices of young people who will live with its consequences, even if they aren’t able to cast a vote.” [HuffPost]

Obama invokes Hitler’s rise in stark warning to America. ‘That’s what happened in Germany in the 1930s’: here.

TRUMP JR.: DEMS ARE NAZIS Donald Trump Jr. said Thursday that the platform of the Democratic National Committee is “awfully similar” to that of the Nazi Party. He made no mention of his father’s supporters who identify as white supremacists, white nationalists and neo-Nazis. [HuffPost]