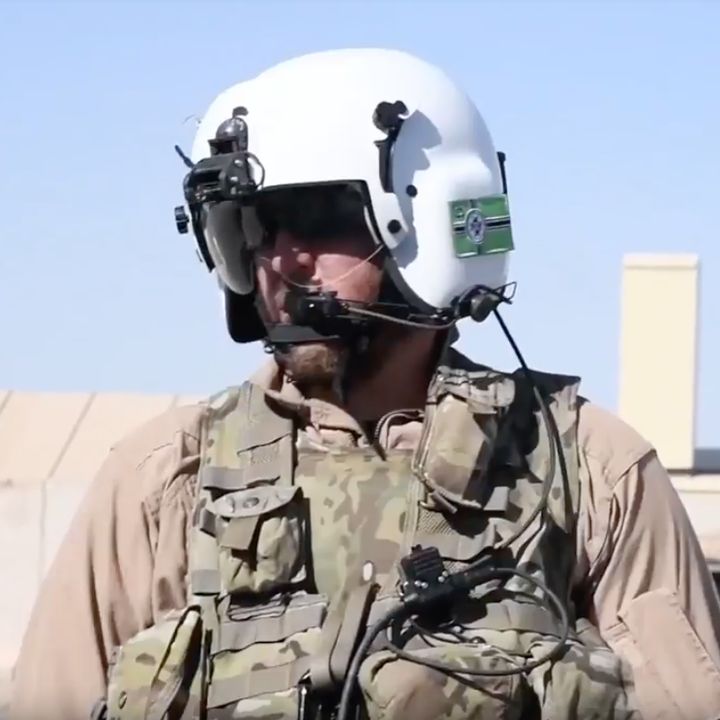 This photo shows a United States MAG Aerospace corporation mercenary in Afghanistan with ‘Kekistan’ nazi flag on his helmet.

After this Australian army soldiers’ nazi flag in Afghanistan.

A leaked photo shows an Australian Army vehicle flying the Nazi swastika flag while on operation in Afghanistan in 2007. https://t.co/6svB7VFcmn pic.twitter.com/7Stvp5WpV5

After this Australian neonazi mercenary in Afghanistan.

And now, nazis in United States mercenary corporations participating in the occupation of Afghanistan.

By Christopher Mathias in the USA:

An employee of MAG Aerospace, an aviation consulting company hired by the military, was spotted in a video wearing a “Kekistan” flag patch.

A civilian contractor working with the U.S. armed forces in Afghanistan has been fired after video footage posted online this week showed him wearing a white nationalist “Kekistan” flag patch on his helmet.

Richardson declined to identify the man, but said he was “immediately terminated” by MAG Aerospace “for a violation of company standards” and “is scheduled to depart Afghanistan today, Sept 25.”

Earlier this week, footage of U.S. and Afghan air crews training to fly a UH-60 helicopter in Kandahar province was posted to the website of the Defense Visual Information Distribution Service, which produces videos for the Department of Defense.

The video shows the unidentified contractor sporting a “Kekistan” flag patch on his helmet. The flag, developed in racist 4chan chat rooms, intentionally mimics the design of the German Nazi war flag, with the Iron Cross replaced by the 4chan logo, the swastika swapped out for the “KEK” symbol and the German red replaced with “Pepe the Frog” green. 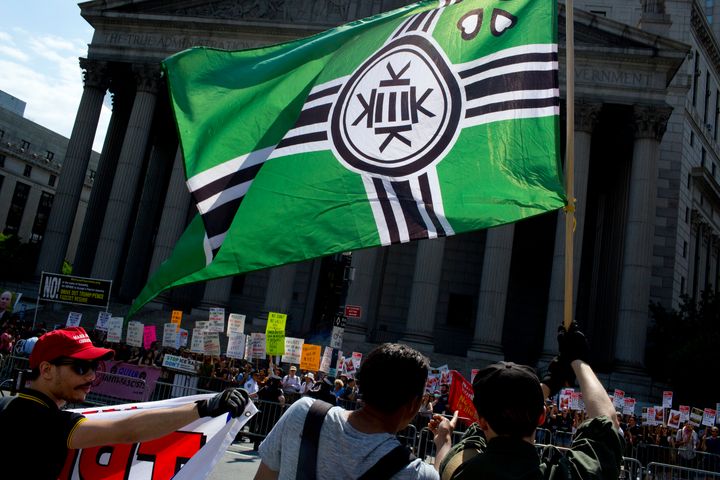 This photo shows a Kekistan flag at an anti-Muslim rally in New York on June 10, 2017.

White nationalists have waved the Kekistan flag at racist rallies across the country in recent years, including at the deadly 2017 rally in Charlottesville, Virginia.

On Sunday, freelance journalist Joseph Trevithick tweeted a screenshot from the DVIDS footage that showed the contractor wearing the Kekistan flag. A short time later, DVIDS removed the video from its website. A version of the video, however, was posted to YouTube. …

Last week, a report from the Government Accountability Project, published in The Daily Beast, documented the rampant bigotry among employees of Sallyport Global, a military contracting company the U.S. government has paid $1 billion to operate the Balad Air Base in Iraq. The Sallyport Global employees in Iraq — many of them white, pro-apartheid South Africans — shared racist and anti-Semitic Facebook videos made by the white supremacist David Duke, a former grand wizard in the Ku Klux Klan.

Sallyport Global in Iraq has not only racism scandals, but a sex trafficking scandal as well.

White nationalism isn’t only a problem among the ranks of private contractors hired by the U.S. military. In 2017, a survey published by the Military Times found that 25 percent of active-duty service members in the U.S. armed forces said they have encountered white nationalists in their own ranks.

Earlier this year, a ProPublica report exposed an active-duty Marine as having connections to the neo-Nazi group Atomwaffen, and as having participated in the violence at the white supremacist rally in Charlottesville. Lance Cpl. Vasillios Pistolis was kicked out of the Marines in July.