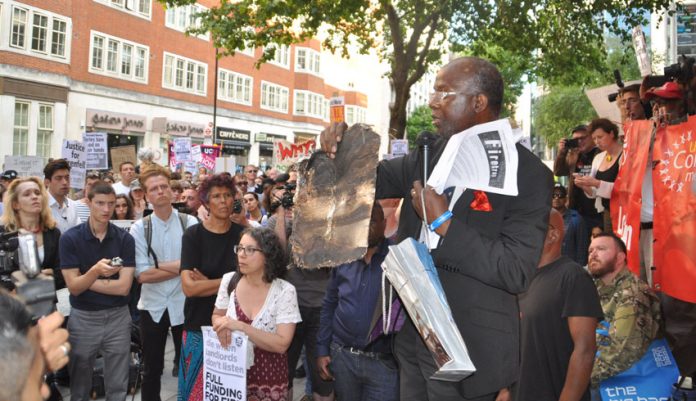 At a rally in London, England last Friday at the Department for Communities and Local Government a resident from north Kensington holds up a piece of charred cladding that had fallen from Grenfell Tower during the blaze.

‘MANY in the fire service and the fire safety sector have been raising issues about regulation, issues like cladding, for many years and we constantly run into a brick wall from a government which is obsessed with deregulating, with reducing what they describe as red tape.’

May told the House of Commons that Kensington and Chelsea council ‘couldn’t cope’ in the aftermath of the fire, and that it ‘was right’ its chief executive, Nicholas Holgate, had stepped down.

Pressed on whether the cladding passed fire and building regulations, she said tests would be made public in the next two days. Labour leader Jeremy Corbyn responded: ‘At least 79 people are dead. It is both a tragedy and an outrage, because every single one of those deaths could and should have been avoided. The Grenfell Tower residents themselves had raised concerns about the lack of fire safety in the block.

‘Mr Speaker, from Hillsborough, to the child sex abuse scandal, to Grenfell Tower, the pattern is consistent, working class people’s voices are ignored, their concerns dismissed by those in power … Those people have died, they will never come back. We have to learn those lessons to make sure this tragedy is a turning point in our whole attitude and never again do people die needlessly, in a towering inferno, living in poverty, surrounded by a sea of prosperity.’

The FBU yesterday wrote to all MPs saying that cuts to the fire and rescue service of 11,000 frontline firefighters since 2010 – one fifth (20%) of the workforce – has put public safety at risk. The letter stated, ‘As a result of the massive funding cuts to fire and rescue services, there has been a significant decline in the capacity of fire authorities to undertake crucial fire prevention work.’

Wrack warned: ‘Of course in this instance, in the question of where people live, red tape is whether you have fire-resistant doors, walls and ceilings to stop the spread of fire. And red tape in that case is the difference between life and death.’

Wrack added that the checks done on cladding in a scientific room are very different from when they are subcontracted out to privateers and put on buildings like Grenfell in a decorative way, creating flumes and chimneys behind them.

He added: ‘Many local authorities, strapped for cash after seven years of cuts, have cut back on fire testing, cut back on inspections because they simply haven’t got the staff to do it any more.’

This 21 June 2017 video from the USA is called How Neoliberalism Caused The Grenfell Tower Fire.

MAY MUST GO! say Grenfell marchers

‘We know the government is guilty,’ declared Karen Boyle at an impromptu rally before the march set off. We know May has lost her majority, the DUP has backed down,’ she added to cheers. Boyle continued: ‘We must not hold back. We can’t live any more with this government, we can’t afford it.

‘We’re determined and we have demands.There is an anger in the wider community and that anger has to be heard. How much violence must be done to us before the government stops doing violence? We will not be drawn into their narrative. We can’t let the Conservative Party nor the right wing media determine how we fight. We can’t live with this government, not for another five years, not for a moment.’

Antonia Bright told the rally: ‘Enough is enough. No-one deserved what happened in that tower.

‘No-one deserved to lose their lives there. No-one deserved to to die in the Mediterranean or lose benefits. We want the May government brought down and ended. Justice means we have to fight for it – that the poor and oppressed fight for it. We are not going to forget, we’ll keep marching until we win.’

Miqui Joseph said: ‘I feel sorry for the ones who lost their families in that tower. I hope they see their children again.’ News Line spoke to several of the marchers as they assembled.

Shirvin Best said: ‘I’m here to show solidarity for human rights, peace and enhancement of the quality of life for all. The march today is about Grenfell Tower and its victims, ensuring that a disaster like this never happens again. From day one, I have been involved in obtaining donations from the supermarkets and encouraging others to actively get involved as volunteers to help the victims of Grenfell Tower.

‘The development, construction and renovation were at fault. There was no proper health and safety risk assessment plan before and after inspection and commissioning. The disregard for the safety and lives of residents in the tower was disgraceful. The renovation was done on the cheap with the minimum health and safety regulation.

‘The community has been fantastic. What we don’t have is the government taking action to support the victims and their families at Grenfell Tower. The £5m fund is an insult to injury. These people have been suffering, they’ve lost families, their loved ones. Their home has been burnt out, they have no identity, no clothes except what has been donated.

‘When he was London mayor, Boris Johnson had no concern about sprinklers and safety in all high rise blocks above ten metres. Sprinklers should be in the Queen’s Speech. They put a lot of poor people in a block and when something happens, they blame someone else. Kensington and Chelsea is one of the richest boroughs in London. They gave £5m to the Opera House yet they couldn’t spend £2 per square metre extra for the cladding. The downstairs nursery lost 13 children alone. Nothing is being done about rehousing.’

Louise and Colin Dawson came down from Scotland for the march. Louise said: ‘We came down to protest about the fact that Theresa May is prepared to put the peace process in jeopardy in Northern Ireland. But the fire started so we decided we’d go to parliament and Kensington.’

Colin said: ‘The fire was cost before lives. It shows up what’s been going on for the last 20 to 30 years since Thatcher. The fire symbolises everything about the capitalist system.’

Louise added: ‘The people should take action to bring the government down. In actual fact, May doesn’t have a government, she hasn’t a deal with the DUP. She’s got to go, she should never have been there in the first place.’

Media graduate Holly Campbell said: ‘What happened at Grenfell Tower should never have happened. My nephew and niece lived in the block opposite. The rich men’s blocks they were building opposite wanted Grenfell to look pretty. What happened was criminal, I think and most people think that.

‘The Tories make the rich richer and the poor poorer. They are just out for themselves and their business friends. I hope Jeremy Corbyn wins this and takes action. He is making the poorer feel confident about the future and I hope he lives up to expectations.’

Social worker amd Unison member Michael Anthony said: ‘I’m here to protest against the government. They have no real mandate and are hell bent on pushing their policies against working and oppressed people. I’m angry about their housing policy which left poor people and migrants in unsafe and dangerous housing, which led to the Grenfell Tower fire.

‘Had it not been for the community making a stand about poor housing, this issue would not have been highlighted. The unions must take action. There should be an indefinite general strike.

‘Let’s bring down this government.’

Mohamed At-Tu said: ‘I’m from Morocco. I was born in the UK and I’m a British citizen. I live in Grenfell Walk, right next to the Tower. We’ve all been evacuated. They put some of us outside on the streets for the past five to six days. Finally, yesterday they’ve given me a hotel for the night.

‘Hopefully, they will give me another place tonight. I’m protesting today. I want answers and people to hear what we have to say. I don’t want Theresa May to be prime minister. On the Thursday, she came to Grenfell Tower. She saw the residents but she didn’t speak to them.

‘She just went to speak to the fire brigade. Now she’s trying to make things better but it’s not going to work. We still haven’t seen the council. Jeremy Corbyn came down and paid attention to the residents, but not Theresa May.’

Saul Sebag, a charity volunteer, said: ‘I don’t think they look after people in Westminster. My family are all Jewish immigrants. I don’t like the way the government treats immigrants. And they don’t care about youth. There are no opportunities. Debt puts you off university. The cost of tuition fees is too high as well as the cost of housing. I’m working full-time for free, it’s just one internship after another.’ 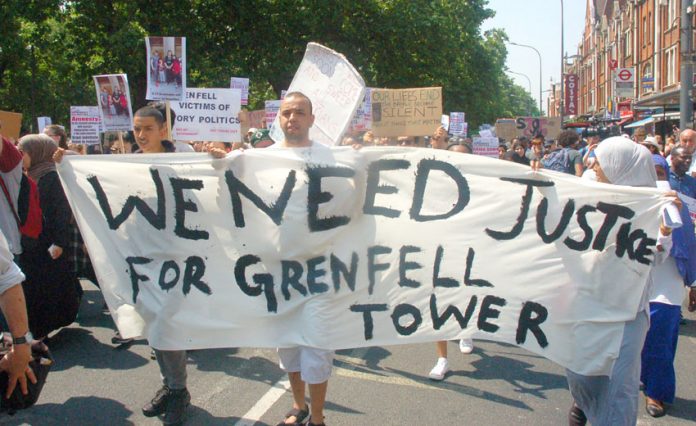 Britain: The Conservative government has revealed that 600 high rise buildings have “similar” cladding to Grenfell Tower, west London where the inferno on June 14 claimed the lives of at least 79 people. A Downing Street spokeswoman added that samples from some tower blocks had been tested and “so far, three samples have been found to be combustible”: here.