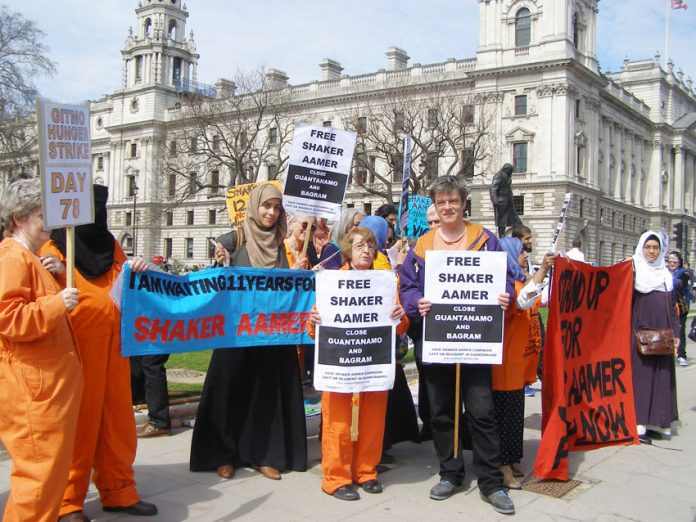 The special edition includes first-hand testimony from detainees Shaker Aamer, Emad Hassan and Younous Chekkouri, who have been cleared for release from the prison yet remain detained without charge or trial.

British resident Shaker Aamer has been detained in Guantanamo since 2002 despite having been cleared for release under both the Bush and Obama administrations.

The British government has repeatedly stated that Shaker should be returned as a matter of urgency to his British wife and their four children in London.

Reprieve has undertaken litigation in the US – on behalf of long-time hunger striking client Abu Wa’el Dhiab – challenging the legality of the methods used to force-feed men in Guantanamo Bay.

Video tapes of Dhiab being manhandled to the force-feeding chair – dubbed ‘torture chair’ by the detainees – and force-fed, have been ordered released by a US federal judge.

Cori Crider, Strategic Director of Reprieve and attorney for the men in Guantanamo, said: ‘Guantanamo is a legal black hole and an affront to justice the world over.

‘This special edition of Vice brings much-needed attention to the plight of those men who remain detained without charge or trial.

‘The US administration is currently trying to stop video tapes of force-feedings being released to public scrutiny as part of its continuing efforts to keep transparency far away from Guantanamo.

‘The US must release these tapes – and the prison from which they came must be closed at once.’

‘Mohammed el Gharani, a citizen of Chad raised in Saudi Arabia, had just turned 15 when he arrived at Guantánamo Bay in February 2002, shepherded off a military cargo plane wearing shackles and blackout goggles.

‘He weighed 126 pounds, was too young to shave, and for months didn’t know where he was. “Some brothers said Europe,” he later recalled in an interview with the London Review of Books.

‘Others thought the unsparing winter sun suggested Brazil. When an interrogator finally told him he was in Cuba, Mohammed didn’t recognise the name. “An island in the middle of the ocean,” the interrogator said. “Nobody can run away from here and you’ll be here forever.”

‘Omar Khadr, born in Toronto, was also shipped to the offshore prison as a juvenile.

‘The 16-year-old made an early impression on the Army chaplain on base, who, walking by his cell, found Omar curled up asleep, arms wrapped tightly around a Disney book with drawings of Mickey Mouse, Donald Duck, and Goofy. “He definitely seemed out of place,” the chaplain told reporter Michelle Shephard, who wrote about Omar in her book Guantánamo’s Child?

‘Fahd Ghazy, who grew up in a Yemeni farming village, was seized when he was 17. He had recently graduated at the top of his high-school class.

‘One of Guantánamo’s earliest detainees, he was initially housed in the jerrybuilt, open-air cages of Camp X-Ray. Around the time he was transferred to a permanent cellblock, Fahd learned he’d won a university scholarship to study in Yemen’s capitol, Sana’a.

‘Nearly 13 years later, he’s still at the naval base – still without charge.

‘Swept up as juveniles, Mohammed, Omar, and Fahd were among some 15 to 20 detainees whose adolescence and early adulthood unfolded within the desolate confines of the prison camp, marked by isolation, abusive treatment and the chronic stress of indefinite detention.

‘For years, the Pentagon misreported how many children had been seized. “They don’t come with birth certificates,” a Guantánamo public affairs officer told the New York Times in 2005.

‘To this day, the government considers Fahd to be older than he is, explains his lawyer, Omar Farah of the Centre for Constitutional Rights.

‘“Because they’re developing, they’re more vulnerable to being traumatised,” says Dr. Stephen Xenakis, a retired brigadier general and child psychiatrist who’s served as a medical expert in several cases at Guantánamo. “They’re detached from their families, they don’t have schooling, and they’re thrown in with adults in this adversarial climate.”

‘The first prisoner Xenakis evaluated was Omar – deemed high profile because his father had ties to Osama bin Laden – who’d been accused of lobbing a grenade that killed an American medic during a firefight in Afghanistan.

‘Gravely injured in the confrontation, Omar was found under a pile of debris with two bullet holes in his back and shrapnel in his eyes.

‘But Omar was air-evaced to Bagram and interrogated almost immediately – pain relief for his injuries withheld during questioning.

‘Years later, in an interrogation room that doubled as an office for doctor-patient interviews, Omar would say to Xenakis, “I’ll tell you what happened in this room.”

‘He described being used as a “human mop”: after painful stress positions caused him to urinate on the floor, he said, military police poured pine oil on his body and dragged him through the liquid.

“These were kids,” says Xenakis. “They’re threatened and harshly interrogated, they’re frightened. I just didn’t think it was consistent with our values as a country.’

‘Dennis Edney, Omar’s longtime civilian lawyer, recalls his client’s bearing during their first meeting in 2004. “I went into one of those cold, windowless cells,” Edney says, “and saw a young boy chained to the floor, trying to keep himself warm. He was blind in one eye, with paralysis in his right arm. He reminded me of a little broken bird. I recall the absolute shock I felt witnessing this lonely, abject figure.”

‘Plagued by procedural snarls and an ever-changing rulebook, Omar’s military commissions case dragged on for years.

‘Had he gone to trial as scheduled in 2010, he would have been the first child soldier to be prosecuted for war crimes since World War II, “a terrible precedent”, according to Human Rights Watch.

‘Instead, after a military judge ruled admissible his statements obtained under torture, Omar pled guilty to all charges, avoiding further entanglement with a system he’d described before the court as “constructed to convict detainees, not find the truth”.

Now 28 and serving an eight-year sentence in Canada, Omar remains close to Xenakis, who provides ongoing support. “He’s going to have some real challenges when he’s out,” Xenakis says. “How does he recover the skills to communicate and socialise outside the prison setting? How does he act in an environment where he can make his own choices? He’s very conscientious and diligent, but he’s got a lot of ground to make up.”

‘According to Polly Rossdale, who directs the Life After Guantánamo project for the human rights group Reprieve, the most ordinary tasks and desires often strike former detainees as insurmountable and unachievable. “When they get out,” she says, “the main things that men call me up about are, ‘How am I going to find a wife?’ Or they want to go to computer class and get computer skills.” Some have been consumed by panic in the shampoo aisle, while others can’t remember how to put on a seatbelt.

The article reveals that an ex-G-Bay prisoner Mohammed, who finally made it out of Chad in 2011, is married now, his second child born earlier this year.

‘He named the baby Shaker, after Shaker Aamer, a mentor and friend still imprisoned at Guantánamo. “Shaker was one of the men who really looked after Mohammed because he was a young boy,” Rossdale explains. “This is his way of saying thank you.’

‘Of the 779 men imprisoned at Guantánamo, roughly 600 were eventually released without charge. Nevertheless, heavy stigma has burdened former detainees looking for work or community acceptance . . .

‘Eighty-seven of Guantánamo’s remaining 148 detainees are from Yemen, 58 of whom have been cleared for transfer . . .’

Poet Hilaire read out a piece for Shaker Aamer in Parliament at a meeting demanding the release of Britain’s last prisoner still held in Guantanamo Bay: here.

29 thoughts on “Prisoners tortured in Guantanamo and Bagram”