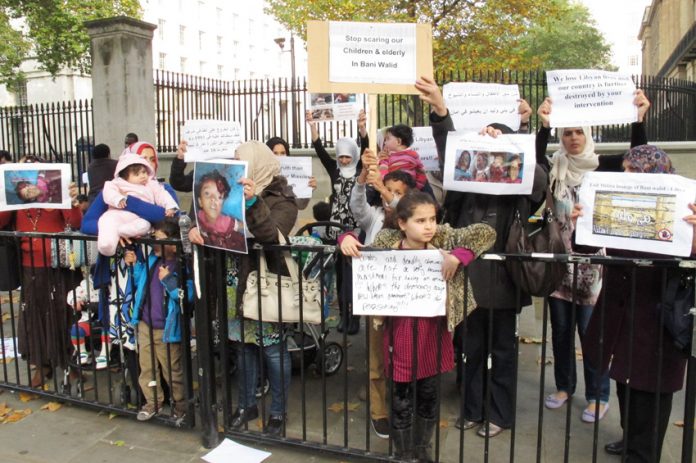 ‘British workers should take action in support of Bani Walid!’

OVER a hundred Libyans living in Britain demonstrated outside Downing Street on Wednesday demanding that the bloody assault on Bani Walid be stopped.

One of their leaflets appealed to ‘human conscience’ saying: ‘The people of Bani Walid are calling you “save us”.

‘Bani Walid is continuously under ferocious attack by criminal armed gangs in which gases and heavy artillery weapons are used.

‘Tens of innocent unarmed civilians were killed and other hundreds were injured including children, women and elderly people because of bombardment on their homes with missiles and all sorts of weapons.

‘We call upon the international human conscience to urgently intervene by all possible means to put an end to such a massacre being led by the militias of Misratah against the people of Bani Walid.

‘We simultaneously warn that any delay to help in putting an end to the ongoing war will undoubtedly result in escalating the matter by the committing of more unpredictable crimes against civilians.

‘Our appeal is to prevent Bani Walid becoming another Tawerga, from which more than 30,000 people were evacuated last year by the same militias we are currently warning against.’

Another leaflet pointed out that Tawerga was ‘emptied of its people because of their colour and they are living in camps with nothing to live on’.

One of the protest leaders, Masoud Atbaiga, told News Line: ‘We’re calling on the UK government to call on the international community to help my family in Bani Walid.

‘More than 500 people have died in Bani Walid after being shelled by big guns by the militia of Misratah.

‘This militia is backed by the Libyan government.

‘The Libyan government in Tripoli are silent.

‘One year ago when Muammar Gadaffi tried to go to Benghazi, the international community decided to bomb Libya by NATO after ten days.

‘Bani Walid is now 25 days without fuel, food and medicine, anything.

‘It’s a very difficult situation for the people there.

‘Some people called from the hospital there saying it was terrible – without medicine, without doctors – and that some people had died waiting for an operation.

‘I tried to contact the Red Cross and they said Libya is a difficult situation and they couldn’t go there because of the guns and militias.

‘I ask the English government and the European governments – where is the democracy to kill children and old people?

‘A lot of houses are now destroyed.

‘I am sad now. My friend called me to say 120 people died between yesterday and today.

‘British workers should take action in support of Bani Walid.’

Abdul Razzag, also from Bani Walid, was born in Tripoli.

He said: ‘The Arab media said Gadaffi was a dictator and killing thousands of his people. That was incorrect.

‘I fled because I was distracted by these reports.

‘I regret what I have done. My country has been destroyed.

‘Libyan assets have been stolen – over $200bn have gone, possibly more.

‘We hoped there would be a new Libya where people had a better life, more freedom and democracy.

‘Unfortunately, what we see now is militias terrifying, killing and kidnapping people using the power of weapons.

‘This morning, I called my brother in Bani Walid.

‘He said the militia have used aircraft to bombard the city of Bani Walid.

‘And they have used artillery and tanks to destroy hundreds of houses.

‘120 were killed yesterday, young men after they surrendered.

‘This is the Misratah militias looking for revenge.

‘The one hospital failed to receive injured people.

‘There is a shortage of basic medical equipment and medicine.

‘Tens of people lost their lives as the hospital doctors were unable to operate due to the shortages.

‘We are trying to raise our voices to say to Mr Cameron “can you just stop deceiving us and being a hypocrite”.

‘He had told us at the time when he used Britain’s power to remove Gadaffi’s regime, he claimed he did this to save civilians from being killed by Gadaffi’s forces.

‘Cameron let masses of members of Al Qaeda, led by Guantanamo Bay prisoners, into Libya where they are leading militias.

‘More than 30,000 from Tawerga city have been kicked out of their homeland by Misratah militia.

‘20,000 innocent people are still held in Misratah prisons for no other reason than they are from Tawerga or Bani Walid.

‘You can’t keep a blind eye when you see the fruits of that NATO invasion.

‘We fear a massacre in Bani Walid if urgent action is not taken to stop these militias.’

Mohammed Omar from Tripoli said: ‘We don’t believe the media.

‘What we have seen in Libya, the media is not telling the truth.

‘Our country is being destroyed by the militia of the Misratah tribe and Islamic Brotherhood, which Al Qaeda is part of.’