Sunday 18 March, we went to the Amsterdamse Waterleidingduinen nature reserve.

In a meadow before the reserve entrance, over twenty fallow deer.

This is a fallow deer video.

Photo of fallow deer and roe deer grazing together in the Amsterdamse Waterleidingduinen: here.

In the next meadow, ten more fallow deer. And two Egyptian geese.

Near the entrance, sounds of great tit, great spotted woodpecker, and chaffinch.

A blackbird on a branch.

In trees along the path: nuthatch, blue tit, and short-toed treecreeper.

In a canal, tufted ducks and a female common pochard. Coots.

A female common goldeneye cleaning its feathers. There are more females, and a male as well.

A reed bunting on top of a reed stem.

In the next canal, a male and a female goosander. 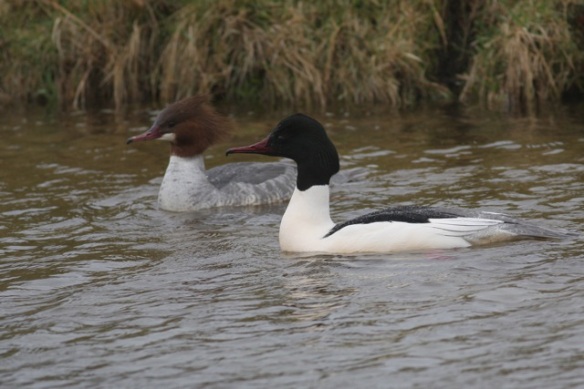 A dead common frog on the footpath.

An adult red fox about 100 meter away.

Above the last dune before the beach, a skylark singing.

Some fifteen common scoters flying over the sea not far from the beach.