Wednesday 1 February. After our arrival in Kotu, this afternoon our first search for Gambian birds.

Pied crows are a common sight in the Gambia, especially in the west, including urban areas.

On the beach: western reef egret and laughing dove. 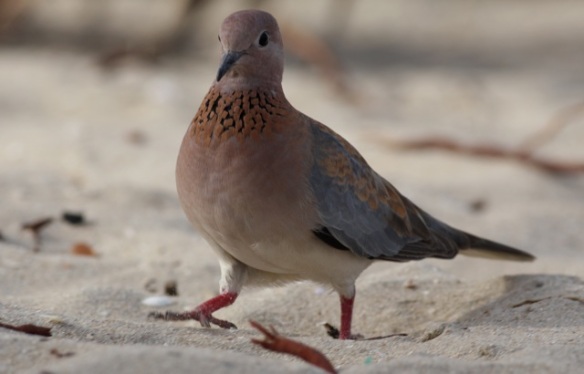 In a field, two spur-winged plovers.

An Abyssinian roller, sitting sometimes on a wire, sometimes on the roof of a shed. Again and again, it dives from the shed roof to the ground, catching a mouse or an insect.

This is an Abyssinian roller video.

A green wood-hoopoe on a tree near the road.

A red-billed hornbill on a tree.

The first Senegal coucal of many which we will see in the Gambia.

In a marsh, about ten cattle egrets and a black egret. Black egrets are famous for their way of catching their prey: they spread their wings like an umbrella, thus making a shadow over the water which attracts fish. However, our first Gambian black egret is not doing that now.

Holes in the mangrove forest soil, made by fiddler crabs. Gambian environmentalists are trying to make this beautiful area a nature reserve, but so far they have not succeeded.

This is a little bee-eater video from Gambia.

A lizzard buzzard on a tree.

Finally, as the sun sets, a broad-billed roller on a wire.

6 thoughts on “Birds of Kotu, Gambia”