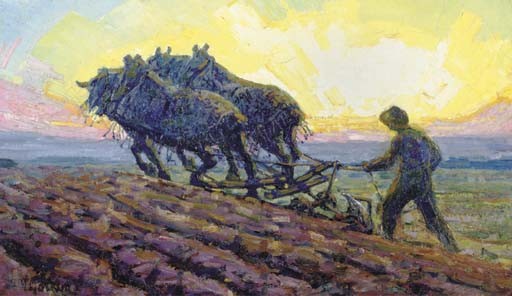 The Frans Hals museum in Haarlem in The Netherlands does not limit itself to showing the works by famous local seventeenth painter Frans Hals.

There is now an exhibition on the whole 17th century local painting Hals family.

And the special exhibition buildings of the museum, at the central city square, now have several exhibitions on nineteenth and twentieth century art subjects.

Van Deyssel lived in Haarlem; also the other exhibition focuses on Haarlem and the region around it, including the coastal village Bergen, where many artists settled after 1914.

Landscapes became important in the Renaissance, and in Dutch art in the seventeenth century, and remained so later, including in the early twentieth century.

The mostly local or regional painters at the exhibition include Jacobus van Looy; the expressionist Herman Kruyder, Leo Gestel, and Jan Sluijters.

And the French cubist Henri Le Fauconnier, who lived in The Netherlands from 1914-1920 as a refugee from the First World War, and who influenced Dutch painters, especially in Bergen village. 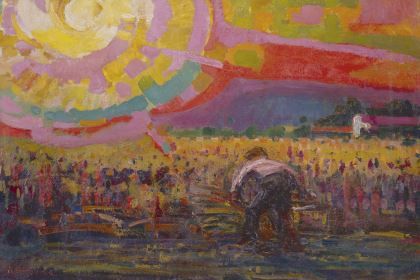 And Herman Gouwe, artistically a luminist, politically a communist; represented here with ‘De Maaier’ (The Harvester), with its blazing sunlight, somewhat similar to some later work by Vincent van Gogh.

Many of his landscapes were inspired by the hilly countryside of Limburg province in the south of The Netherlands.

He was unable to paint during bad weather.

Much of Leo Gestel’s landscapes here are of Mallorca in Spain.

Both cubism and futurism influenced Gestel.

Next entry is on the Van Deyssel exhibition.