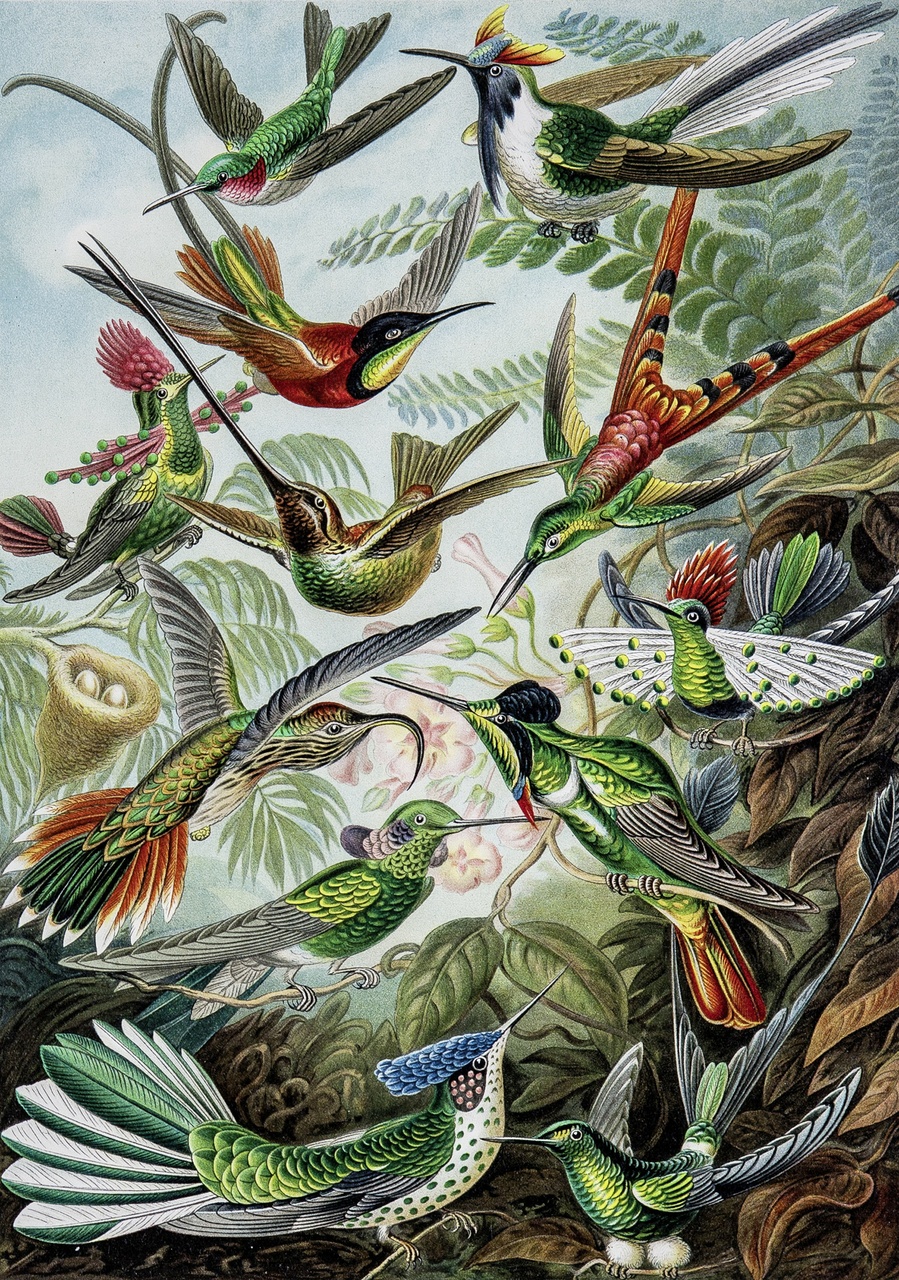 In Teylers Museum in Haarlem in the Netherlands, there is a special exhibition.

The museum writes about it (translated):

In honour of his 100th year of death, the Teylers Museum highlights the wonderful visual world of German zoologist and artist Ernst Haeckel (1834-1919). Haeckel was one of the most important scientists of his time and a very gifted draftsman. Just like his great heroes Goethe and Von Humboldt, he wanted to understand nature in its great context. He used emotion and reason, art and science.

Haeckel’s first research was about micro-organisms from the sea, but ultimately his theories were about the development of all life forms, including humans. His books and his powerful visual language played a major role in spreading Darwin‘s ideas about descent and evolution. His Kunstformen der Natur in particular was a huge success and inspired artists and architects. This work is completely digitized and can be admired online. More than 20 plates from the book can be seen in the exhibition. This 25 September 2018 video is about male and female house sparrows having a sandbath.

Kerstin de Haan made this video in her garden in Haarlem city in the Netherlands.

After a month of walking, a female lobster is forced to fight for a breeding pit before laying her eggs.

HAARLEM – When Haarlem woman Yvonne van Eerden was eating in the Spaarne river city on Sunday evening at restaurant The Louisiana, her eye fell on a special announcement. Louis the Lobster, the 8.2 kilo-weighted lobster of at least eighty years old that is in the aquarium of the restaurant, is being auctioned for charity. Van Eerden offers. Not to throw Louis into the cooking pot, but to give him a nice old age. “That’s how it works two ways.” …

Ideally, Yvonne would like to bring Louis back to Canadian waters where he comes from. “But then maybe he will be caught again”, she explains her efforts to bring the gigantic lobster somewhere else. Yet she does not have to look for an aquarium in her living room, because after consultation the [Harderwijk] Dolfinarium is ready to house Louis. “He will gets his own home there”, says Van Eerden proudly. …

In the Dolfinarium they are expecting Louis. “We found a nice spot for him”, says spokesman Taco Rietveld. “We do have other big lobsters, but not as big as this one”, he jubilates.

Because of Louis’s exceptional size, he is housed in a private aquarium. “Because he needs deep water”, the spokesman explains. Whether Louis later will have other lobsters as companions, Rietveld can not yet say. “We need to see how it goes.”

Yvonne van Eerden has paid four hundred euros for Louis the Lobster. That money is transferred by restaurant owner Fausto to The Clean Ocean Foundation.

This 8 June 2017 video shows a male blackbird bathing in the Haarlemmerhout woodland in Haarlem city the Netherlands.

Tonnie de Jong made this video.

This photo shows a calf driving away a mute swan near Haarlem city in the Netherlands.

Kerstin made this photo on 1 September 2016.

This is a video from India about a nest of rose-ringed parakeets (Psittacula krameri), also known as ring-necked parakeets.

The Vogelwerkgroep Zuid-Kennemerland in the Netherlands reports about their counting of ring-necked parakeets in Haarlem. All these birds sleep in two trees along the Amerikavaart canal.

On Saturday 19 December, around sunset, 783 parakeets were counted. A record number for this species in Haarlem in winter. In January 2014, 638 birds had been counted.

When a sparrowhawk (a bird of prey, roughly the same size as the parakeets) flew near a tree, it did not really upset the ring-necked parakeets. Only five birds started flying to drive the sparrowhawk away.

However, when a goshawk, a bigger bird of prey, appeared, all parakeets started flying, and it took them ten minutes to settle again.

Man on crutches in ISIS area, nearly drowns, but makes it to the Netherlands

In late August of this year we got to know him, Rafiq, a 65-year-old Palestinian from Syria, sweaty and exhausted, breathing heavily and inching, using crutches, crossing the border between Serbia and Hungary. He wanted only one thing: to go to the Netherlands. Correspondent Marcel van der Steen saw him disappear into the night.

Van der Steen decided to keep in touch with Rafiq and recently received notice that he had managed to reach the Netherlands. Rafiq is now staying in the Panopticon Prison in Haarlem, which is now an emergency shelter. Reporter Nicole le Fever met him there.

Rafiq’s journey is hard to summarize. To flee Syria he had to cross ISIS territory. A Chechen stopped him and asked why he had no beard. “That does not grow with me,” he replied. But the young man thought that was not a good excuse and Rafiq received twenty lashes.

When asked if he smoked, he lied, because he had heard that he should never admit it. Fortunately, the cigarette pack that he had was not found on him. Finally, the legs of his trousers above his ankles were cut off because Muslim men, according to tradition, must not wear clothing over their ankles.

Once in Turkey, it turned out that as a Palestinian he was not allowed to stay because he had no papers. “Stateless”, therefore, says the new card which he received from the Dutch authorities.

So the only way was to try to reach a Greek island by boat. The first attempt failed. The boat made water and Rafiq would have drowned if he would not have been saved by an Iraqi friend. The second attempt succeeded though.

Late August Marcel van der Steen saw him stumble in the dark towards the Hungarian border. He managed to enter the country and for 1000 euros he took a taxi to Germany. The last stage, to Amsterdam Central Station, was by train. There he got a ticket for the train and bus to Ter Apel refugee camp to report there.

Rafiq is grateful that he has arrived safely in the Netherlands. Syria and his problems with the government he won’t talk about much because he is worried about his wife, who stayed behind in Syria. However, he talks about his old life, including in Dubai and Eastern Europe, where he used to own electronics stores and a furniture store.

Will he still see his wife?

His greatest wish is that his wife may come to the Netherlands, but he is concerned about the length of the procedure. First he was told he would hear something within 5 to 12 months, but that is now a year. And then it takes another year before family members can come. Rafiq is afraid that he will not live that long.

All is not well with his health. He has many problems with his legs and kidneys. He also has to follow a special diet. Fortunately, he gets help from two Syrians in the cell next to him. They help him out of bed and with cleaning. For one of his neighbours bad news came today. One of his sons was killed in Syria and his 16-year-old daughter has remained all alone. The man is desperate.

“So, we all have our stories and problems.” says Rafiq.

While thousands of refugees risk their lives to cross the Mediterranean each day to commence an arduous journey through the Balkans, the governing coalition in Berlin is fighting over the most effective way to send them back: here.

This video shows a caterpillar of a privet hawk moth on an apple in the garden of Xandra van den Oever in Haarlem in the Netherlands.

This video is about ring-necked parakeets in Greece.

Dutch SOVON ornithologists estimate there are now about 10,000 ring-necked parakeets in the Netherlands. Mainly in the big cities The Hague, Rotterdam and Amsterdam.

However, they are spreading to other cities like Haarlem.

The birds showed up for the first time in Haarlem in 2005. Last winter, 500 parakeets were counted at Haarlem sleeping roosts. In June 2014, 937 individuals were counted.