This 4 June 2020 video from the USA says about itself:

In US news and current events today, a Washington D.C. resident named Rahul Dubey was hailed as a hero after sheltering over 60 protesters in his home overnight, in order to prevent their arrest and potential assault by the police.

The Black Lives Matter protests that have sprung up in the wake of the killing of George Floyd have been met with a new onslaught of police brutality and police violence, but some kind citizens are stepping up to protect their fellow Americans from violence at the hands of the police.

After braving tear gas and rubber bullets during the George Floyd protests and BLM protests, the peaceful protesters were offered shelter in the home of Rahul Dubew, who even managed to have pizzas delivered during the Washington D.C. curfew. When the curfew lifted and the protesters were able to step outside, Dubey was met with cheers for sheltering the protesters in place and offering them sanctuary.

Journalists targeted with ‘brutal violence’ from US police as protests continue for eighth consecutive day: here.

George Floyd’s final words
Read like one of the last Beckett poems;
His repeated pleas as they crushed him,
A broken bubble of air in his throat.

As Derek Chauvin stamped the life
From this man you could hear the sudden
Return of the jackboot, but on American soil;
That rebranding came with a police uniform

And blood moat. For this is the castle
They keep, whose gates were stormed
Right through to the weekend.
As opposition spread like wildfire

Thousands in Britain join anti-racist uprising. Crowds demand justice for George Floyd and an end to inequality in their own country: here. 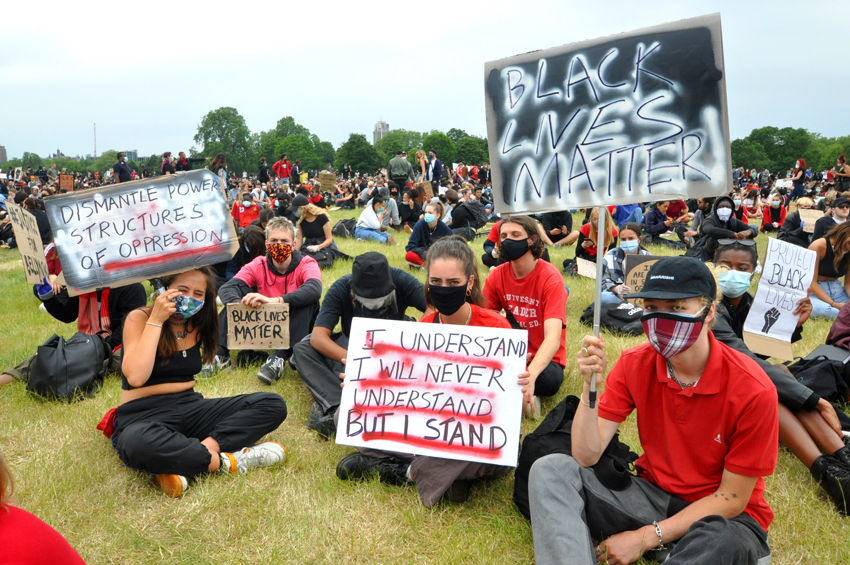 35,000 WORKERS and youth rallied yesterday at Marble Arch, Speakers Corner, to insist that ‘Black Lives Matter’ and give their 100% support to the masses of US workers that are taking on Trump and the US gangster police after the police killing of George Floyd.

Bertie Cox, an Equity union actor, told News Line: ‘I will no longer sit in silence, justice needs to be done. The police have got away with it for years. They have like a “freedom pass” to do what they want, and that includes “killing”.’

AFTER last Wednesday’s massive march demanding justice for George Floyd, over a quarter of a million people in the UK have intervened in the struggle in the US and signed a petition demanding the UK stop arming the American police with tear gas, rubber bullets and riot shields.

The petition is growing at a rate of a thousand signatures a minute, according to the ‘Change.org’ site yesterday afternoon.

The Tories are coming under public and political pressure amid concerns that riot gear from the UK is being used on peaceful protesters and journalists in the US.

The protests against police brutality and racism have been sparked by the death of George Floyd at the hands of US cops. …

The viral petition comes as a group of MPs is also calling on the government to demand a halt to the exports. The list of MPs, co-ordinated by Labour MP Dawn Butler, will be published on Friday. Human rights campaigners add that where there is clear misuse of equipment, the UK is obliged by law to halt exports.

The petition, started by Mike West, says: ‘The UK cannot support a continuous breach of human rights and supply the USA with tear gas, rubber bullets and riot shields that are being used against protesters.

‘By continuing the sale of these items, the UK is choosing profit over human rights and is unacceptable. Government records show it grants export licences worth millions of pounds for the sale of anti-crowd gas, riot equipment and other small arms to the US – but the government’s own rules say such exports should not go ahead where they are likely to be used for “internal repression”.’

Meanwhile, George Floyd’s family lawyer Benjamin Crump said in a statement: ‘With Officer Chauvin we believe it should be first-degree murder.’

Crump was reacting to the news that the charge against the officer who killed George Floyd has been elevated from third to second-degree murder.

First and second-degree murder under Minnesota law require proof that the defendant intended to kill.

First-degree in most cases requires premeditation, with second-degree more related to crimes of passion.

A third-degree murder conviction would not require proof that the defendant wanted the victim to die, only that their actions were dangerous and were carried out without regard to human life.

The three police officers involved with the death of George Floyd have now been charged as accomplices to murder.

However, Crump says that Officer Chauvin should be charged with murder in the first degree and that the three other officers should also be held accountable for that crime.

Crump said: ‘We are relieved that they have been upgraded to second-degree murder, but the attorney general has informed the family that the investigation is ongoing and if there is evidence to support a first-degree murder conviction they will charge it.

‘And so the family is relieved that Attorney General Keith Ellison, who has a track record for championing civil rights has moved expeditiously and arrested these officers before we memorialise George Floyd tomorrow here in Minnesota.

‘Because we know if you cooperate or participate in the commission of a crime, then you can be held accountable for that crime as well.

‘They do it to minorities all the time. So we want equal justice in America.’

Quincey Mason, George Floyd’s son, said: ‘I am here with my family and we demand justice. My father should not have been killed like this. We want justice.’

Calls for British government to stop selling tear gas to the US: here.

BORIS JOHNSON was pressured to say “black lives matter” today as he was challenged in the Commons over his silence on the uprising in the United States.

Labour leader Sir Keir Starmer said he was surprised that the PM had not mentioned the death of George Floyd more than a week after his killing.

Mr Starmer said he hoped the PM would raise it with President Donald Trump when they next speak and “convey the UK’s abhorrence” of Mr Trump’s response.

The bust of King Leopold II of Belgium, who orchestrated the colonial genocide of 10 million Congolese people, has been defaced by protesters in Ghent, Belgium.

The movement against racism and injustice is truly global! pic.twitter.com/MZLlX7eeFZ

In Belgium, several statues of King Leopold II have been defaced in recent days. This happened, eg, in Ekeren, Ghent, Brussels and Hasselt.

Leopold II was king from 1865 to 1909. Under his rule, there was a very violent colonial regime in what was then the Congo Free State in Central Africa. The black population was exploited and tortured. Millions of people were killed.

Due to the demonstrations in the United States, the protest against the former monarch in Belgium has flared up again. A petition has also been launched to remove all statues of Leopold II from the streets. It has already been signed more than 36,000 times.

4 thoughts on “Anti-racism all over the world”