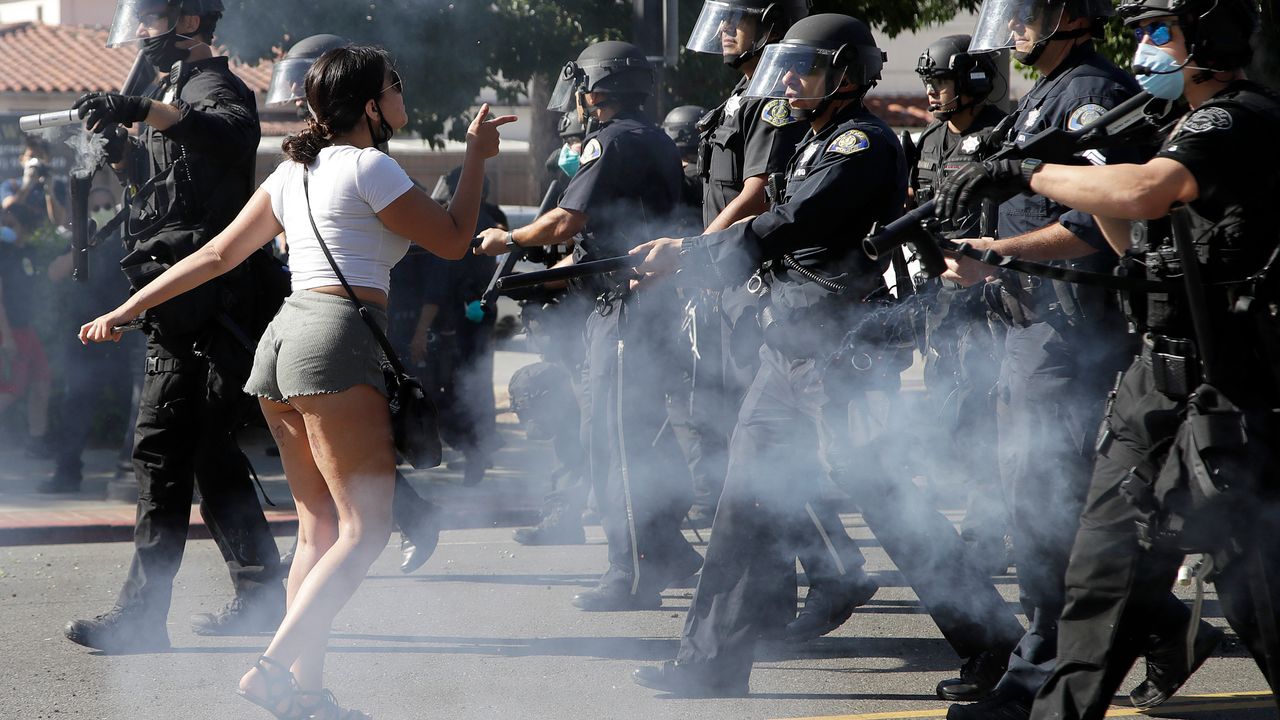 This AP Photo/Ben Margot photo shows a protester confronting San Jose, USA police as they advance on May 29, 2020, as people demonstrate nationwide in response to George Floyd dying while in police custody.

Tens of thousands of people, mainly young and working class of all races, have taken to the streets of American cities to protest the police murder in Minneapolis of George Floyd, a 46-year-old African American man, who died with a policeman’s knee on his throat for nine minutes, while horrified bystanders pleaded for his life and recorded the killing in videos that have shocked the world.

Thousands defied the 8 p.m. curfew imposed by Minneapolis Mayor Jacob Frey and quickly extended to neighboring St. Paul, to many suburbs in surrounding Hennepin and Ramsey counties, and to all of Anoka and Dakota counties, in the Twin Cities exurbs.

The sheer extent of the curfew demonstrates that the state and local authorities were not merely concerned about violence in a small inner-city neighborhood in south Minneapolis, but about eruptions in any area populated by the working class throughout the huge metropolitan area, home to more than three million people.

There were reportedly large numbers of people in the streets both in south Minneapolis and in the downtown area, chanting slogans like “No justice, no peace, prosecute the police!” They ignored the curfew order and the patrolling military vehicles.

Some 500 National Guard troops were sent into the city by Governor Tim Walz, a Democrat. They are guarding infrastructure and have not yet been deployed directly against the population. Walz, himself a retired command sergeant major in the National Guard, is the third governor in recent years to call out the troops to deal with unrest provoked by police murders, following Democrat Jay Nixon in Missouri (Ferguson) in 2014, and Republican Larry Hogan in Maryland (Baltimore) in 2015.

The Washington Post reported overnight, “Defense Secretary Mark T. Esper and the chairman of the Joint Chiefs of Staff, Gen. Mark A. Milley, had spoken with Walz on Friday.” The two officials offered support, but Walz did not request any military assets “at this time”, according to a Pentagon official who spoke to the newspaper.

Georgia’s Republican Governor Brian Kemp called out the National Guard early Saturday morning after a protest in Atlanta over the death of George Floyd was attacked by police, touching off violent clashes outside the CNN headquarters in that city.

Thousands of demonstrators, black and white in near-equal numbers, chanted “We can’t breathe” as they assembled in Centennial Park, marched to the State Capitol, and then rallied outside the CNN Center, whose executives ordered the building closed.

Governor Kemp, one of the most notorious advocates of ending all social distancing and reopening all businesses despite the danger of COVID-19, suddenly discovered the pandemic, issuing a statement declaring, “We encourage protesters to exercise their Constitutional rights safely, especially in light of COVID-19.”

Soon after, police began attacking demonstrators with mace, pepper spray and teargas. Some protesters responding by smashing windows, throwing rocks and bottles at the police, and setting one police car on fire. Kemp then called out the troops.

There was a large demonstration in Brooklyn, New York on Friday night, the second night of direct clashes between thousands of protesters and the police. After protesters marched with peaceful chants of “Black lives matter” and “We want justice”, police waded into the crowds and made as many as 100 arrests, filling up buses from the Department of Corrections to take people off to jail.

Riot-equipped police units cleared the area around the Barclay Center, where large numbers of demonstrators had gathered.

In Washington, DC, the Secret Service locked down the White House after a crowd gathered outside chanting against the police and President Trump. Other large protests were reported in Detroit, Houston, Denver, Los Angeles and other cities.

In Milwaukee, hundreds of youth and college students blocked traffic on I-43 as they walked into downtown to protest over George Floyd and against the killing of Joel Acevedo, killed by an off-duty Milwaukee policeman. Protesters also blocked freeways in Oakland and San Jose, California.

Minnesota state and local officials clearly hoped that the indictment of Derek Chauvin, the cop whose knee was on George Floyd’s neck, would slow the momentum of the protests. But the charges brought against Chauvin, of third-degree murder and manslaughter, were the most minimal possible given the video evidence.

No charges have been brought against the three other cops involved in the killing—Thomas Lane and J. Alexander Keung, who held Floyd down by the back and legs while Chauvin slowly killed him, and Tou Thao, who kept onlookers from interfering with the execution.

Moreover, the charging document released late Friday afternoon reads like a brief for Chauvin’s defense, not his prosecution. It claims that Floyd’s autopsy revealed “no physical findings that support a diagnosis of traumatic asphyxia or strangulation. Mr. Floyd had underlying health conditions, including coronary artery disease and hypertensive heart disease.”

The document concludes that three factors contributed to Floyd’s death: “The combined effects of Mr. Floyd being restrained by the police, his underlying health conditions and any potential intoxicants in his system likely contributed to his death.”

There is no doubt that racism was an important element in the murder of George Floyd. But racism is encouraged in a definite social context, of deepening social inequality under 21st-century capitalism, where the ruling class makes every effort to divide and split the working class.

Oluchi Omeoga of groups Reclaim the Block and Black Visions Collective talks about what life is like on the ground in Minneapolis right now. Editors’ Note: This interview was taped as former officer Derek Chauvin was arrested.

Hundreds of thousands stage multiracial demonstrations against police violence in a powerful show of working-class unity, 30 May 2020: here.

This 29 May 2020 video from the USA about the killing of George Floyd says about itself:

Protests against police killing of frontline worker Breonna Taylor escalate in Louisville, Kentucky. By Dominic Gustavo, 30 May 2020. Hundreds protested in Louisville on Thursday demanding the arrest and prosecution of police who killed Breonna Taylor during a “no-knock” raid on her residence in March.