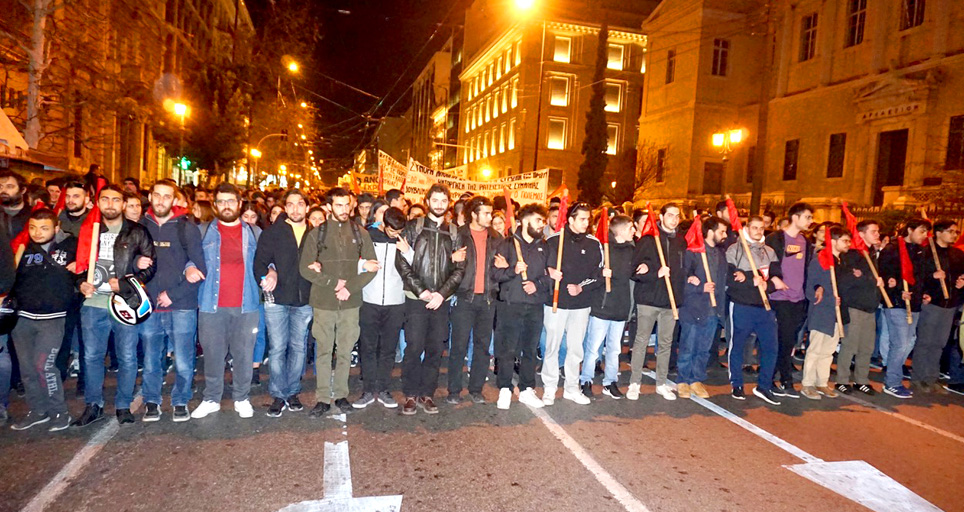 ‘OPEN the doors to the refugees’, demanded 20,000 marchers in Athens on Thursday.

Some 20,000 people marched through Athens on Thursday night calling for the Greek borders to be opened and allow refugees to cross from Turkey.

It was a militant and angry march with dozens of large banners stating, ‘We welcome the refugees.’

People shouted slogans against the European Union, NATO, imperialism, the Greek government and the riot police.

The march was organised by left-wing parties, trade unions and anti-racist groups.

Mass marches were also held in the cities of Patras, Ioannina and Thessaloniki. …

Armed riot police buses were placed on the road to prevent the marchers demonstrating at the EU offices in Athens.

Throughout the week, Greek army units and armed riot police attacked refugees with tear gas and water cannon as they were attempting to cross the border.

Last Monday, 2 March, reporter Jenan Moussa had tweeted that ‘a Syrian man was shot by Greek border guards’. It has been confirmed by Greek press reports that the murdered refugee was Mohamed al-Arab a 22-year-old man from Syria.

Three Greek cabinet ministers held a press conference last Tuesday in Brussels defending Greek army and navy actions. But videos posted by news agencies and on social media show Greek coast guards attempting to sink a small boat full of refugees with gunshots and by piercing the boat with a sharp-ended rod.

Last Wednesday, the newspaper editor Yannis Laskaratos of the Gnomi Greek newspaper published in Alexandroupoli, next to the Greek-Turkish border, stated in an interview to TV stations that ‘unbelievable events’ are occurring on the banks of the river Evros that separates Greece and Turkey.

Laskaratos said that armed local farmers self-described as ‘national guard’ are patrolling the borders along with Greek army and Greek riot police units.

Laskaratos stated that these racist vigilantes beat up the CNN journalist Kostas Pliakos who had intervened against the beating of refugees. Pliakos was ‘arrested’ by the vigilantes.

Laskaratos also said that the Greek Prime Minister Kyriakos Mitsotakis was photographed with them on his visit last Tuesday to the border village of Kastanies along with EU Commission President Ursula von der Leyen, who described Greece as ‘the shield of Europe’ against the refugees.