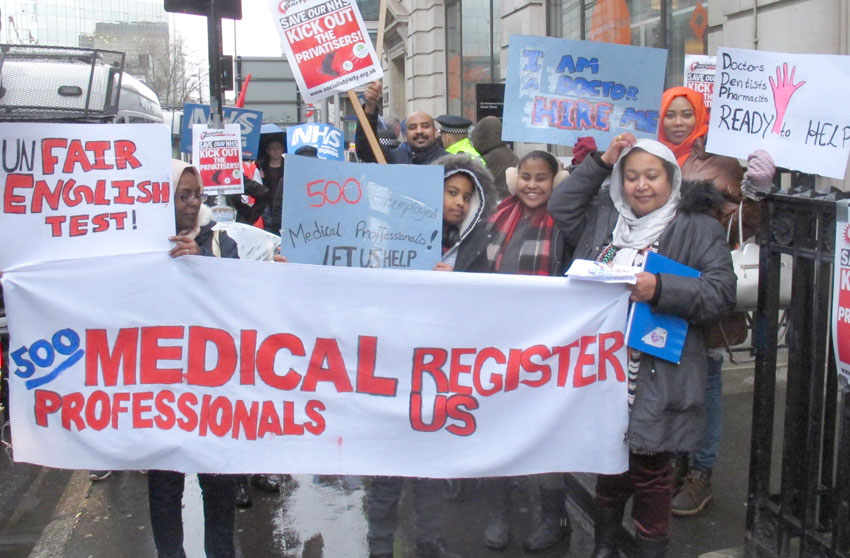 OVER 100 refugee doctors are signed up to become vital medical support staff – as unregistered UK doctors in Britain, many of them from the Middle East, are set to play a part in fighting the Covid-19 pandemic as UK medical support workers.

RefuAid, which supports refugees in Britain, said it knew of 514 medics who fled conflict or persecution abroad to settle in the UK, but were not permitted to work.

Although these people are qualified medics in their home countries, some cannot register to work as doctors in the UK because they have not taken a final exam – which was cancelled after the coronavirus outbreak.

The General Medical Council, which represents doctors in the UK, said last Thursday that qualified doctors who were refugees in the UK could now sign up to be medical support workers in Britain’s National Health Service (NHS).

Many of the healthcare professionals are surgeons, from countries including Syria, Sudan, Iran, Iraq, and Turkey. On average, they have 7.5 years of medical experience. More than one hundred refugee doctors have signed up for the scheme and will start work in the next 10 days – says Anna Jones, the founder of RefuAid.

Jones said: ‘We’ve got at least four anaesthetists … which is what the hospitals need right now. Our medical workers have worked in conflict settings where there is a lack of resources and they’re under a lot of pressure.’

The scheme allows doctors who passed English tests to do some clinical tasks under supervision. Forty-eight refugee doctors have opted to take intensive English language courses so they can apply for the NHS role within three months, Jones said.

And medical support workers will undertake a range of essential routine clinical tasks under supervision, according to NHS England’s website. ‘This role may be used to support medical staff in GP practices, critical care units or in other secondary or community care settings,’ NHS England said.

Although the new role falls short of allowing refugees to work officially as doctors, RefuAid is pushing for alternative ways for them to pass their final exams and be able to work in the UK.

Dr Ahmad Al Qassab, 45, a surgeon from Baghdad, arrived in the UK in May 2015 before getting refugee status later that year. He has passed all his medical exams except the final one – PLAB 2 exam – which the UK government cancelled amid the coronavirus crisis.

He graduated from the medical school in 1999 and has worked his way up from junior doctor. ‘I am ready to help in any way the NHS asks me to,’ he said.

‘The GMC recently started to register final year students months before their graduation, so why are refugees being treated differently?’ In fact many refugee doctors can work in other countries: but the UK has been more hesitant.

‘GMC and UK decision-makers should use what they have on UK soil, and refugee doctors like us would make a change at least by helping the tired NHS workers,’ he said.

‘I got news that 100 doctors died in Italy alone, so it is an important time for them to find a way to acknowledge what we can do.’

The charity Building Bridges supports refugee and asylum-seeking doctors arriving in the UK. And one of those now in the NHS who benefited from that support is Helal Attayee.

Originally from Afghanistan, Dr Attayee qualified as a doctor in Turkey and works as a senior house officer at Queen’s Hospital in Romford.

He said: ‘I was not very safe in Afghanistan. Prior to going to Turkey I was working in a NGO … while I was working there I was being threatened by the local people that I was not supposed to work with the “infidels”.

‘When I qualified as a doctor from Turkey I was very, very happy. (However), when I went back to Afghanistan … I was again threatened by the Taliban and the (fundamentalists). I talked to my family and they said: “Helal, it’s not safe for you to stay here anymore,” so I came to the UK.’

He continued: ‘When I first arrived in the UK I didn’t have any documents so I was not allowed to work. Getting the refugee documents, it is a very slow and complex process.

‘I think without their Building Bridges help I would not be in this place that I’m in now … they were like a torch for me, showing me the path in a dark night.’

Funded by NHS Health Education North Central and East London, Building Bridges, along with other programmes such as Reache in Salford, provide help and support to doctors who arrive in the UK as refugees.

Building Bridges is a partnership of three organisations: the Refugee Council, the Refugee Assessment and Guidance Unit and Glowing Results, and it helps refugee doctors through the process of gaining their GMC registration, starting with English language tests through clinical exams, to working on a clinical attachment, so they can find jobs in the NHS.

The charity has assisted doctors from all over the world, many of whom have had to flee from armed conflict or who were facing persecution in their home countries.

Retired London GP Stephen Nickless is one of those who volunteers with the programme.

He said: ‘I think the work Building Bridges does is really important. We have a duty to our professional colleagues who have been displaced by war, to support them in remaking their lives and then in helping them become productive members of our community. Given the skills and experiences they’ve got and the needs of the NHS, I think it’s important we help them become functioning doctors again.’

Meanwhile, thousands of people working in the NHS, social care and local services have contacted a Unison hotline in the last week expressing anxiety at the lack of gloves, masks, eye protectors and gowns where they work.

Staff from across the UK’s public services say they’re scared that without the right protective equipment, they risk catching the virus and passing it on to their families, or the elderly and vulnerable people they work with and care for.

Keen to work with the government, Unison has . . . passed the testimonies from staff working in hospitals, schools, care homes and out in the community, including social workers, teaching assistants, refuse collectors and police staff, to health secretary Matt Hancock.

In a letter accompanying the harrowing stories sent to Unison, general secretary Dave Prentis urges the government to ensure without delay that staff get the necessary protective kit and reassure them supplies are on their way.

Every employee in care homes and supporting people in the community should be sent a checklist of what PPE they need and clear guidance about how to use it and social distance at work, says Unison.

Employers must reassure staff they won’t be pressured into attending work when they should be self-isolating or have health risks. The government also needs to address urgently how to work better with wholesalers to solve equipment shortages, says the union.

The most disturbing stories to the Unison PPE alert ‘hotline’ relate to delivery delays and shortages of protective equipment. Care staff describe the difficulties observing the two-metre rule when dealing with people with dementia or learning disabilities.

The union says the comments reflect just how scared and anxious staff are for the people they look after and their own families.

The quotes submitted by workers online who contacted PPE alert include: ‘Our clients are terrified we’ll bring the virus to their homes and we’re equally afraid of that. Many of us have isolated from our children because we fear for their lives. My colleagues have been asked to wear bags over their faces for lack of surgical masks when needed.
‘It’s getting to the point where I want to quit my job as I feel I’m endangering my own life.’

One woman caring for vulnerable adults, whose colleague is in hospital with Covid-19, said: ‘Staff are extremely stressed and anxious and feel they’re not being supported with basic PPE. We’ve no face guards and are constantly being coughed on and sneezed on by residents. Small plastic aprons covering no more than an adult bib would are no protection against this virus.’

The union points out that improved guidance has been issued but issues still persist with getting equipment through to staff.

‘The safety of NHS and care workers is absolutely critical – they are leaving their families this Easter to care for the loved ones of others in the most difficult circumstances imaginable. The very least they deserve is the equipment needed to keep them safe.

‘It’s tragic to see deaths of public services workers and the people they support over the past few weeks. Unless the government can get to grips quickly with supply problems, the numbers dying could spiral.

‘Staff care deeply about the elderly and vulnerable they look after. But the lack of protective equipment for those working in such close contact with others means lives are being put at risk.

‘While most are safe at home, NHS and care staff are being scared out of their wits for fear of contracting and passing on the virus at work and to their loved ones.

‘Sending these shocking stories to the heart of government shows ministers why there’s not a moment to lose. The government must get to grips immediately with this dreadful national situation. Otherwise, the consequences don’t bear thinking about.’