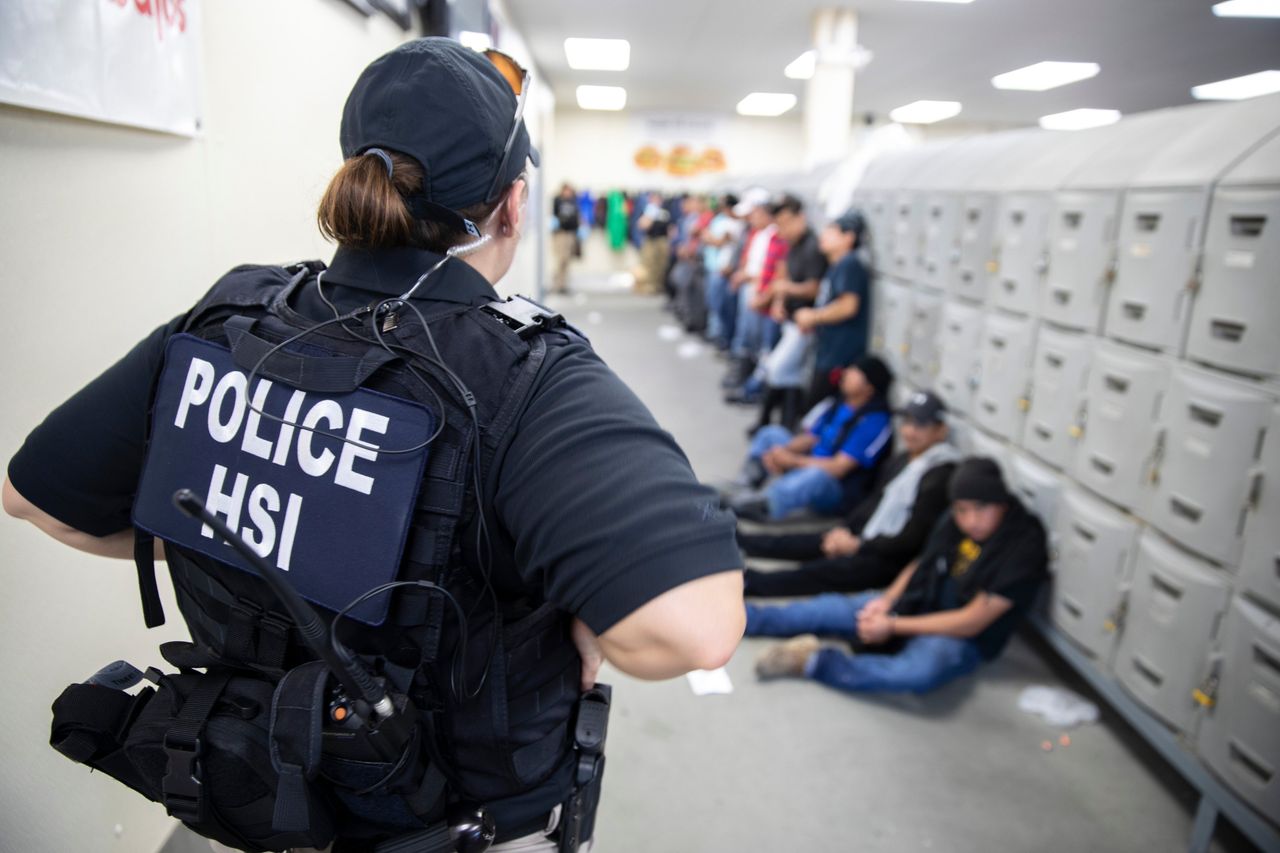 By Norisa Diaz and Patrick Martin in the USA:

The Trump administration has given its real response to the fascist massacre in El Paso, Texas, demonstrating its sympathy for the anti-immigrant ravings of the gunman who murdered 22 people, nearly all of them Hispanic, by carrying out the largest immigration raid since Trump entered the White House.

On Wednesday, an army of 650 Immigration and Customs Enforcement (ICE) agents, including heavily armed SWAT teams, surrounded seven poultry processing plants in Mississippi and detained all who could not prove they were in the US legally. There is no indication what proportion of the 680 detained, nearly all Latinos, are in fact undocumented. ICE officials said all those without documents would be processed for deportation, with a few “humanitarian” exceptions.

The plants are owned by two large food processing companies, Koch Foods Inc. of Park Ridge, Illinois (not connected to the Koch brothers oil empire), and Peco Foods of Tuscaloosa, Alabama. They are located in six small towns ringing the city of Jackson, the state capital—Bay Springs, Canton, Carthage, Morton, Pelahatchie and Sebastopol.

At the Koch Foods plant in Morton, where reporters witnessed the detentions, about 70 family members, friends and other residents gathered outside, shouting, “Let them go! Let them go!” as three buses were driven up and filled with detainees.

Workers were handcuffed with zip ties, their belongings were placed in plastic bags and they were boarded onto buses destined for the Mississippi National Guard base in Flowood. Press reports said that the nearly 700 workers would be processed at an airplane hangar on the base, separating them into various categories, ranging from those to be immediately deported to those to be released because they were in fact US citizens.

In a previous large-scale raid in Tennessee, the day after 100 workers were detained 500 children did not go to school. Given the far larger scale of the Mississippi raid, it is likely that thousands of children are being directly affected. 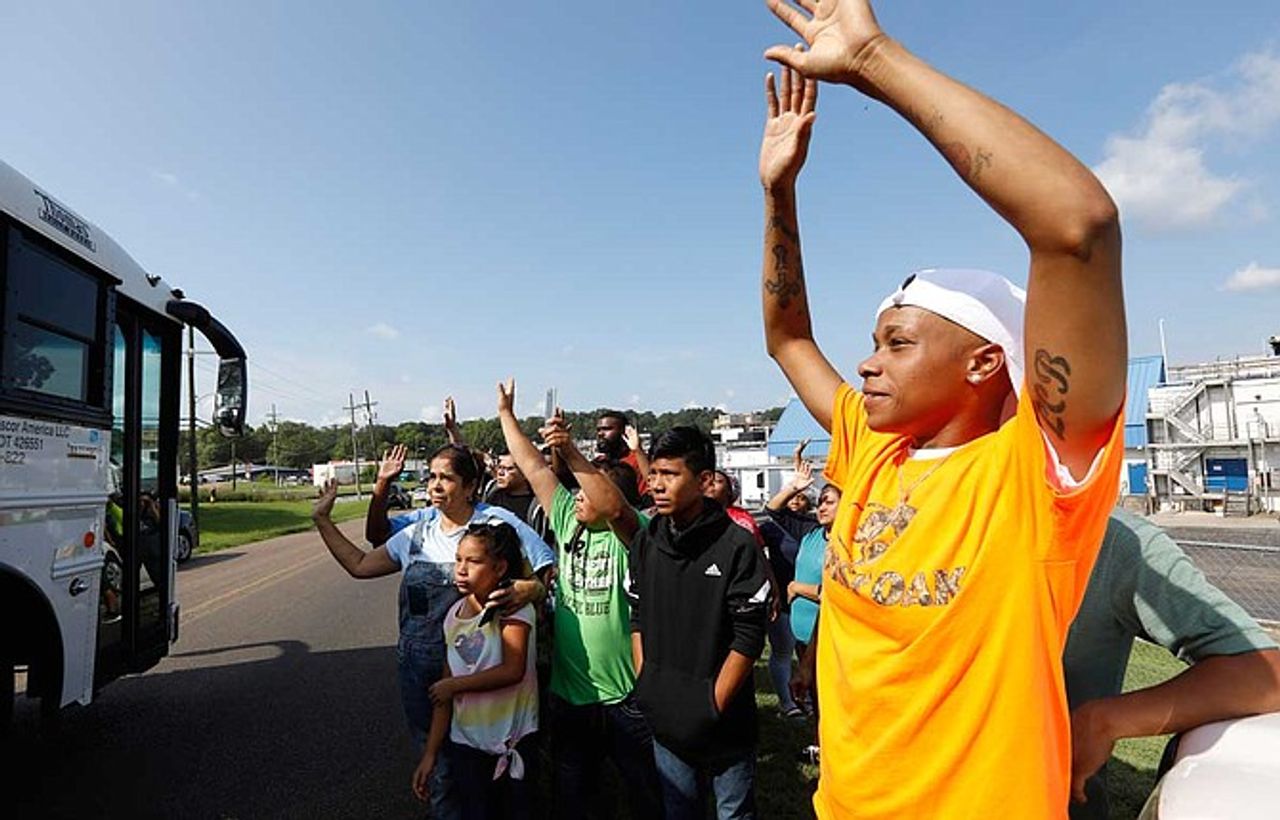 In Scott County, where Morton and Sebastopol are located, School Superintendent Tony McGee told the press that students ranging from kindergarten through high school had a parent detained in the raid. He said that school bus drivers had been asked to return children to their school if there was no one at home to receive them.

ICE and Justice Department officials claimed that there was no connection between the timing of the raid and Trump’s visits to Dayton, Ohio, and El Paso, Texas, the same day. The US attorney for the Southern District of Mississippi, Mike Hurst, told reporters, “This operation began over a year ago. You don’t bring over 650 special agents from across the country into the Southern District of Mississippi in a matter of three days without preparation for months and months and months.”

There is no doubt, however, that Trump was well aware as he set out on Air Force One that ICE agents were fanning out across southern Mississippi to make hundreds of arrests. Far from being concerned that the show of force might detract from his supposed efforts to act as a “healer” and “unifier”, he welcomed the opportunity to demonstrate to his fascistic supporters that the administration will proceed ruthlessly against migrant workers, regardless of popular outrage over the El Paso massacre.

Official statements issued by ICE were full of the bureaucratic jargon that is designed to obscure the horror being meted out to hundreds of workers, guilty of nothing but trying to feed their families by working at some of the most thankless and low-paid of jobs—at chicken-killing and processing plants whose line speeds make the work both exhausting and dangerous. 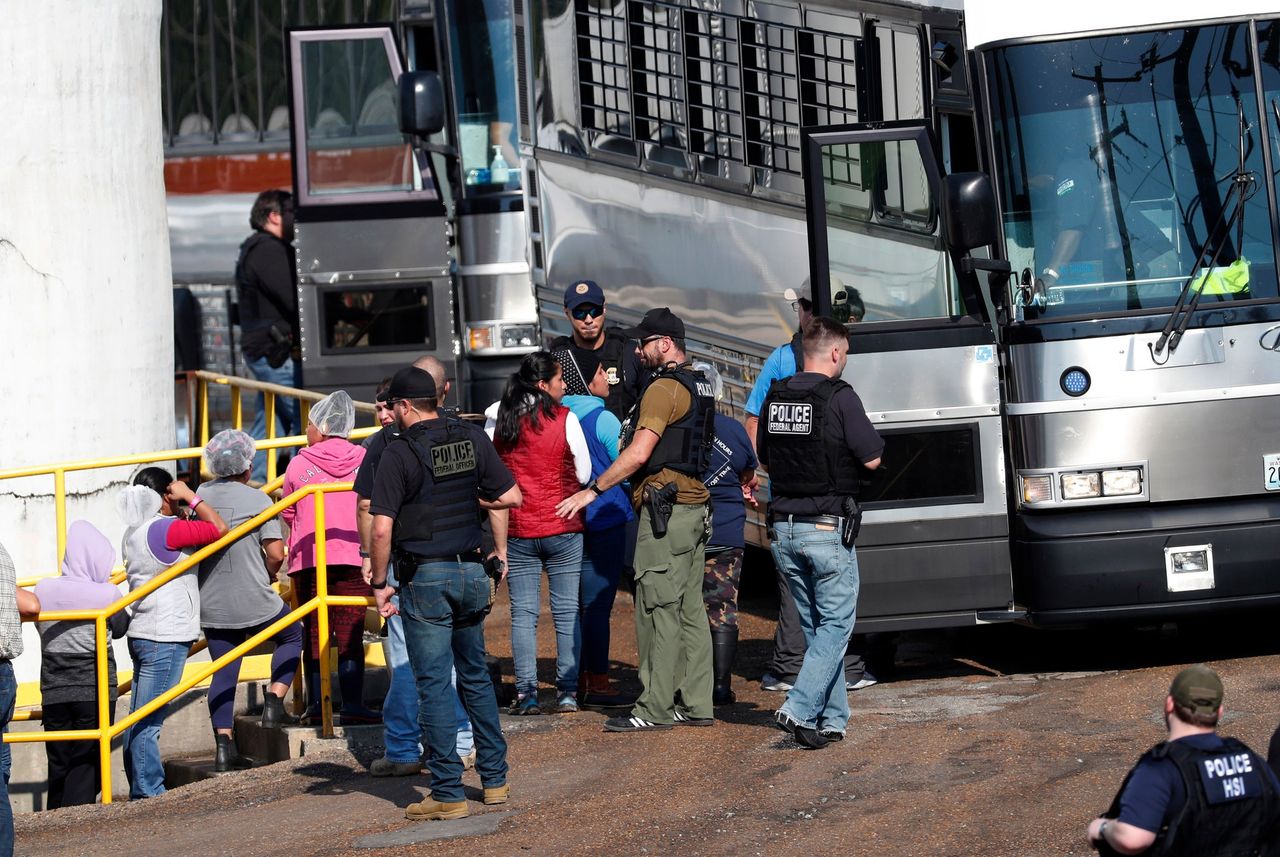 “All the unlawfully present foreign nationals arrested Wednesday are being interviewed by ICE staff to record any potential mitigating humanitarian situations,” an ICE statement said. That is a reference to the handful of exceptions covering detainees who are the sole caregivers to US citizen children, who may be released but forced to wear an ankle bracelet.

The vast majority, however, will either be put into deportation proceedings now, or, if they have already been issued final deportation orders, put onto planes to take them to Mexico, El Salvador, Guatemala or Honduras, the home countries of most of those detained.

Acting ICE Director Matthew Albence reiterated the administration’s position that it did not seek to separate parents and children, but that arrests would lead to family separations as part of the normal operation of the criminal justice system. Asked what would happen to workers who have children in the US, Albence said affected children would be placed with other family members, and, in some instances, parents could be released with ankle bracelets.

The majority of those arrested in the sweeps have been from Mexico. However, arrestees have also included citizens of Honduras, Venezuela, the Czech Republic, Kazakhstan, Peru, El Salvador, Guatemala, Colombia, Iran, Nigeria, Korea, the Philippines, Romania and the United Kingdom.

Wednesday’s raids in Mississippi underscore the real danger of fascism, which arises not primarily from the actions of individual mass murderers like the El Paso gunman, but from the mobilization of state forces, like the modern-day Gestapo of ICE and the Border Patrol, and the ultra-right political movement being built up by Trump.

President Trump vowed in June to deport “millions” of undocumented immigrants via large-scale raids. He repeated those threats, attempting to intimidate immigrants living in 10 major urban areas that were named as likely targets. In the meantime, ICE was building up for the sweep in southern Mississippi and for similar assaults yet to come.

Wednesday’s raids were executed as the world was still reeling from the three horrific mass shootings within eight days in Gilroy, California; Dayton, Ohio and El Paso, Texas, which killed a combined 34 people and injured 57.

Trump’s cynical visits to Dayton and El Paso on Wednesday, where he postured as “consoler-in-chief”, were met with angry crowds who realize that the real response from the White House to the mass shootings is more immigration raids and intensified xenophobic filth.

Before departing for Dayton and El Paso on Wednesday, he dismissed criticism of his use of xenophobic language that was echoed in the fascist manifesto of the El Paso shooter, claiming, “I think my rhetoric brings people together… Our country is doing really well.”

“In both clear language and in code, this president has fanned the flames of white supremacy in this nation,” Biden said. “We have a president who has aligned himself with the darkest forces in this nation.” Trump, he continued, “has publicly and unapologetically embraced a political strategy of hate, racism, and division,” adding that he had “more in common with George Wallace than George Washington.”

This is no doubt true, but Trump has yet to match the deportation record set by the Obama-Biden administration, which deported more than 400,000 immigrant workers in 2012, compared to the highest figure under Trump, 256,000 last year.

And Biden said nothing about the role of the Democrats in Congress, who went on summer recess after approving a budget deal that fully funds the Department of Homeland Security, including money for many ICE raids like those conducted Wednesday, as well as funds for more detention centers and more ICE and Border Patrol agents. The Democrats have focused their efforts on dissipating and suppressing mass popular opposition to Trump and facilitating his reactionary pro-corporate, authoritarian and militaristic agenda.

The budget legislation pushed through Congress by the Democrats was accompanied by a pledge from House Speaker Nancy Pelosi and Senate Minority Leader Chuck Schumer that there would be no further legislative challenge to Trump’s actions in diverting Pentagon funds to build his long-promised wall along the US-Mexico border.

A CLOSER LOOK AT OBAMA’S IMMIGRATION STATS Data obtained this month by HuffPost through a Freedom of Information Act request reveals the most serious crime committed by more than half of the migrants arrested at the border and tagged as criminal deportees during Obama’s second term was entering the country without authorization. [HuffPost]