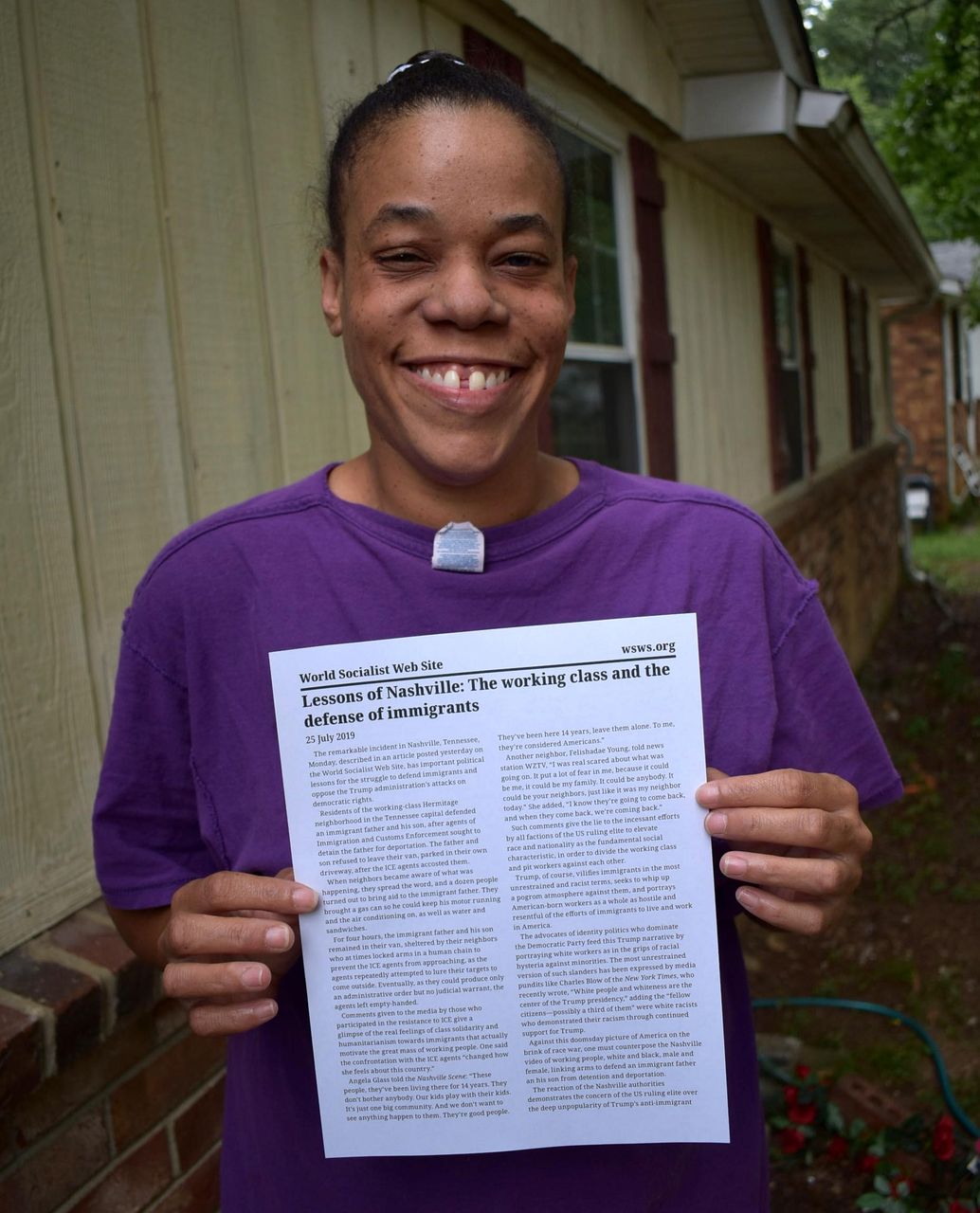 Reporters for the World Socialist Web Site recently spoke with Rosheda Martin, a resident from the working class Hermitage neighborhood in Nashville, Tennessee, where residents physically prevented immigration police from snatching one of their neighbors.

On July 22, Immigration and Customs Enforcement (ICE) agents entered the neighborhood to detain an immigrant father and his son for deportation. The father and son took refuge in their van, parked in their own driveway, while their neighbors provided them with gas to keep the engine running and air conditioning on, as well as water and sandwiches. After four hours and repeated attempts to lure their targets to come outside, the ICE agents were forced to leave the premises.

The incident demonstrated the deep opposition within the working class, motivated by class solidarity and democratic sentiments, to Trump’s fascistic assault on immigrants. The mobilization by working class residents also stood in sharp contrast to response from the Democratic Party, which had recently voted to fund Trump’s immigration policy to the tune of $4.6 billion.

Rosheda described her reaction to what she saw: “What I saw was an injustice from the government in a country that basically was built on the backs and sweat of immigrants. Even our forefathers were immigrants. We all started as immigrants is what I’m saying. Basically, anyone that is not a Native American is an immigrant.”

“This is a man that has a family,” Rosheda pointed out. “This is a man that is just trying to live and be a productive citizen. This man is living just like I am, from paycheck to paycheck. He’s trying to be a good influence to his community, provide a nice home for his son. Isn’t that what you all try to do for your families, too? Is that the reason why he has to leave the United States of America?”

In Rosheda’s neighborhood, she describes workers “of different ethnic backgrounds, different colors, different traditions in their families” all living side by side with one another.

“To be exact, the working class is what makes the rich”, she continued. “They can’t have what they have if we don’t go out and work. With us out there working, look how they treat us. I’m an American, but yet I can’t get health care. I make too much money to get food stamp assistance, but I need help with groceries. I can’t go to the bank and get a loan because I don’t have enough credit. Yet still, I’m going out and working every day.”

“It’s not about race,” Rosheda added. “It’s about people that are real people trying to live and survive. We ain’t asking for the whole pie, but we want the same piece of pie that you’re eating. Quit taking that whole pie and give us a piece, that’s all we’re asking.”

In the face of increasingly fascistic and flagrant assaults on immigrants, such as last week’s unprecedented mass roundup of nearly 700 immigrant workers in Mississippi, it is absolutely crucial that workers take up the struggle to defend their persecuted class brothers and sisters. Such a struggle requires workers to organize independently of the two capitalist political parties, to form their own rank-and-file factory and neighborhood committees, on the basis of a revolutionary socialist program that seeks to unite workers throughout the world.

On this, Rosheda states: “There’s a lot of us out here thinking this is just what it is, it’s just gonna be this way, it’s not gonna change. But we can change it. We can come together as a force. It says ‘We the People’ of the United States, not we the government. We have got to come together and help one another and educate one another. You gotta educate, wake up.”

On Saturday, nearly 100 protesters were arrested outside of an Immigration and Customs Enforcement (ICE) office at the Starrett Lehigh Building in Manhattan’s Chelsea neighborhood [in New York City] . The protesters formed a human chain across both lanes of the West Side Highway beside the office building to draw attention to the facility: here.