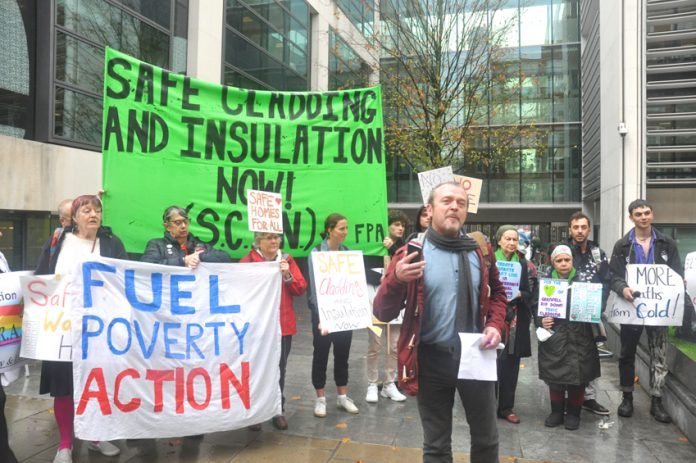 This photo from London, England shows a protest demanding safe insulation and cladding. Grenfell Tower fire disaster survivors forced onto Universal Credit by the Conservative government now face the prospect of not being able to heat their homes.

SURVIVORS of the horrific Grenfell fire are to be forced onto Universal Credit just days before Christmas. Documents released ‘quietly on Budget Day’ show that North Kensington Jobcentre Plus will start introducing the hated benefit system from 12 December.

All of those who use the Jobcentre, who have a change in their circumstances will be forced onto the new benefit system whether they like it or not. The Universal Credit rollout was postponed for North Kensington following the Grenfell fire in June 2017. It will now resume putting local residents into extreme hardship.

Meanwhile, the Tory government’s own top welfare advisor yesterday slammed Universal Credit. The government’s expert adviser on social security has said the next phase in the roll-out of Universal Credit could push thousands of claimants into hardship or even out of the benefits system altogether.

Under the government’s proposals around 2 million people currently on tax credits and around 750,000 who receive out-of-work disability benefits will be given a month to make a claim for Universal Credit or risk having their existing benefits stopped. They will then face a five-week wait for the first payment.

Ian Diamond, the chair of the Social Security Advisory Committee (SSAC), a formal body providing advice to the Work and Pensions Secretary, wrote in a blog post on the SSAC’s website: ‘We are concerned that … aspects of the proposals load an unreasonable level of risk on to the claimant. We fear that, in too many cases, they may be adversely impacted by the proposals or fall out of the social security system entirely.’

Dave Wiltshire, Secretary of the All Trades Union Alliance said: ‘The unions must act, and act now to ensure that Universal Credit is immediately scrapped. Our only option is mass strike action, coordinated by the TUC, a general strike to bring the government down and put an end to this vicious new benefit system.’

Even some Tories understand the devastating impact Universal Credit is having..https://t.co/rko9wO3tn8