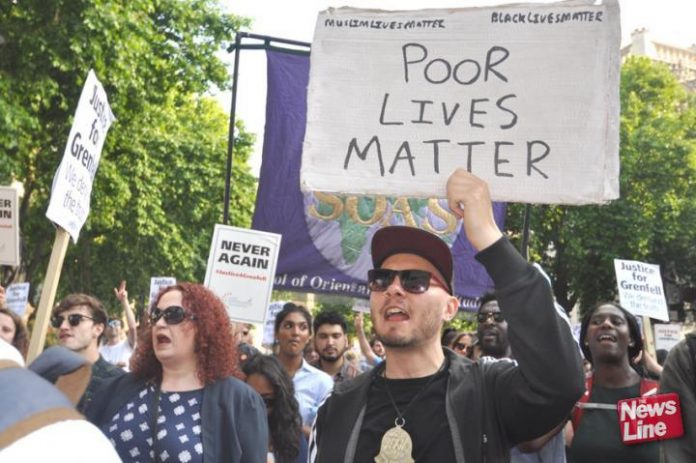 ‘We feel tomorrow is about remembering and honouring the 72 that died’, Justice4Grenfell campaign co-ordinator Yvette Williams told News Line yesterday ahead of today’s first anniversary of the Grenfell Tower fire.

Labour Party leader Jeremy Corbyn told Parliament yesterday that he is joining tonight’s Silent March for Grenfell, which assembles at 5.30pm at the Wall of Truth at the Maxilla Centre in the shadow of the tower.

Yvette continued: ‘The community have got a lot of support both nationally and internationally and that is really important at this difficult time. ‘There are about 20 towns and cities across the UK that are either holding silent walks or vigils tomorrow, and the city of Amsterdam are holding a walk as well.

‘It’s really important that they do that because justice can only be served if those who are unaffected are as outraged as those who are directly affected. ‘The J4G campaign will be with our community tomorrow. ‘Then the solidarity walk is happening on Saturday, assembling at Downing St at 12 noon and marching to the Home Office and the Department for Housing Communities and Local Government in Marsham Street.

‘It is about the lack of progress generally in addressing the issues related to Grenfell, like no outright ban on [flammable] cladding, that we have had to fight for a diverse inquiry panel and that although that has now been gifted they are only coming on in phase two of the inquiry. ‘The removal of similar cladding on over 300 buildings nationally is proceeding too slowly and is leaving thousands of people sleeping in unsafe buildings every night.’

In Prime Minister’s Questions in the House of Commons yesterday, Labour leader Corbyn said: ‘Tomorrow marks one year of the anniversary of the Grenfell Tower fire. I’ll be meeting families again tomorrow at their Silent March. ‘But the sad truth and reality is that many of them are still waiting for the security of a permanent home one year on from that disaster …

‘I pay tribute to the families for all that they’ve been through and all the fortitude they’ve shown. But sadly the reality is that some of them have still not got a permanent home to move into. It’s very important for the mental well-being of everybody they have somewhere they can call home and they know it is their home.’

8 thoughts on “London Grenfell fire disaster, a year ago”