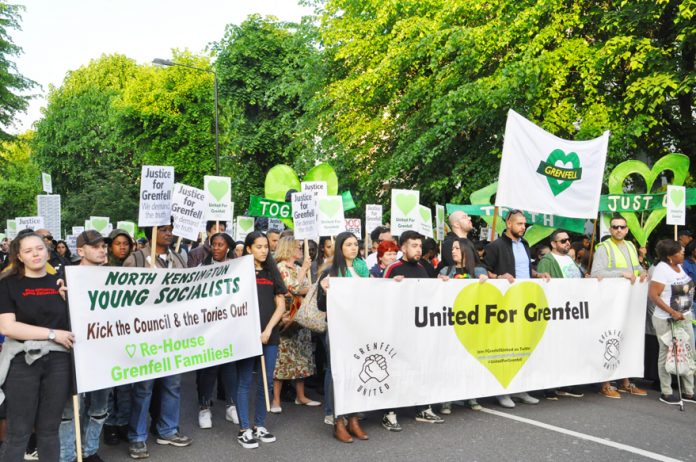 BEREAVED Grenfell relatives were unable to attend the start of public inquiry yesterday due to Home Office visa delays, with family members who have been granted ‘core participant status’ left waiting months for the right to enter the UK.

One of those left out is Karim Khalloufi. His sister perished in the blaze, feared he would be unable to attend the public inquiry after waiting since December to hear back from the government about his visa application. Theresa May’s ‘hostile environment’ continues! He will miss the beginning because his visa will now be printed on Wednesday – two days after the start of the hearing.

‘I can see this morning that the families are gathering a lot of strength, they are becoming stronger and when the next part of Phase One starts they will be a force to be reckoned with’, Yvette Williams, campaign co-ordinator of Justice4Grenfell, said on the first day of the inquiry taking place at a hotel in central London.

At the beginning of the month, families met with PM May, forcing her to concede two additional members of the inquiries panel. Williams added: ‘I am still unconfident in the panel, I can’t understand why the advisors are only being put on to Phase Two, there are important issues that are going to come into Phase One.

‘One of the things we are relying on those additional panel members to do is to actually keep people at the heart of the inquiry.’ When asked about the two thirds of the Grenfell families who are still in temporary accommodation, she said: ‘I have no confidence in the local authority re-housing the survivors and their families into permanent homes. ‘They should just step down, I am surprised they are still here, they didn’t turn up on June 14 last year (the day of the fire). ‘I don’t know why they are still hanging around, I have no confidence in them.’

Marcio Gomes, the father of a baby stillborn after his parents escaped the Grenfell Tower fire, spoke of his loss on the opening day of the public inquiry. Marcio was in tears as he recalled holding his son Logan, hoping it was a bad dream. The child was stillborn in hospital on 14 June 2017, hours after his parents fled the blaze. Relatives of all 72 victims will be given the chance to commemorate loved ones at this stage in the inquiry.

THE TORY government’s ‘hostile environment’, blocking students from studying in the UK, blocking overseas doctors from working in the NHS, while demanding landlords check the immigration status of their tenants, is being challenged, driving the Tories back on a number of fronts: here.