This June 2013 video was made during an excursion from Finca Las Abubillas to the steppe areas of Extremadura in Spain. It shows a roller and a little owl.

On 17 April 2016, after we saw great bustards earlier, we were still in the steppe area of Extremadura.

We arrive at the Magasca river. According to a sign, Iberochondrostoma lemmingii and Iberian barbel fish swim there.

We don’t see them. But we do see Spanish pond turtles resting on rocks along the bank.

A booted eagle flies past.

A grey wagtail on the river bank.

Stonechat male and female on a bush.

This video from Spain says about itself:

Rollers are fantastic members of the avifauna of Extremadura. This pair are at their nest box, put up specifically for them. A beautiful bird.

We arrive at an area where Spanish bird lovers have put nest boxes for rollers on electricity poles. Other bird species, like spotless starlings, lesser kestrels, common kestrels and jackdaws also use these nest boxes.

A roller sitting near a nestbox.

Great bustards on the other side of the road. 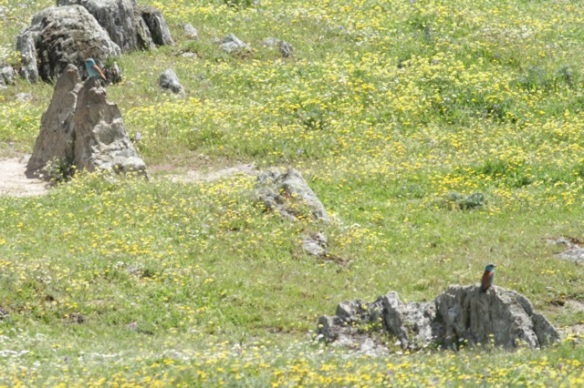 Also rollers on that side, sitting on rocks.

Another roller next to its nestbox.

A lesser kestrel couple at another nestbox.

As we continue, a male Montagu’s harrier flying.

And a female as well.

A zitting cisticola flies while singing.

A male and a female Montagu’s harrier flying together. Another male shows up. So does a female marsh harrier.

A southern grey shrike on a bush.

This video is about Extremadura in April 2012; showing great bustard and other birds.