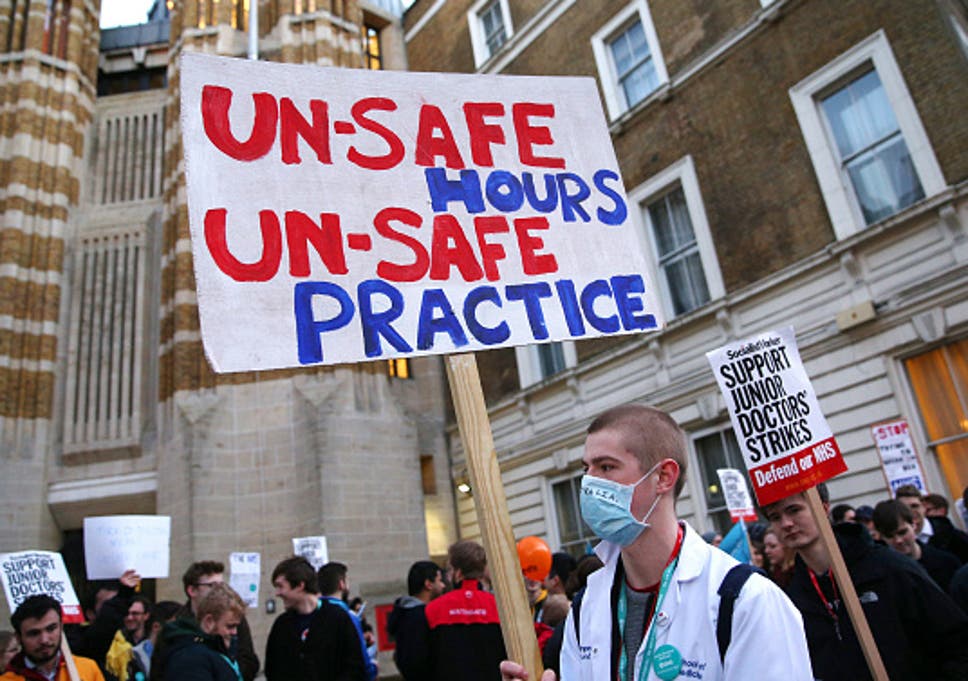 After Establishment voices in the USA smearing the Black Lives Matter movement as ‘terrorism’ … after governments in Bahrain and in Britain considering journalism ‘terrorism’ … after the United States air force and their Saudi royal allies as well bombing Doctors Without Borders Hospitals, killing doctors, nurses and patients, in their ‘wars on terror‘ in Afghanistan, respectively in Yemen … now this.

Tory ‘war on terror’ used in war on Junior Doctors

EMAILS, made public this week, between the Tory government and the head of NHS England, Sir Bruce Keogh, reveal the way the Tories attempted to turn a ‘war on terror’ into a war against junior doctors.

These emails, between department of health officials and Keogh, refer to a letter published by Keogh in his capacity as medical director of NHS England, the supposedly ‘independent’ body overseeing the NHS.

His letter was published in November after junior doctors voted by 98% for strike action over the imposition of a new wage-cutting contract. It was sent in the aftermath of the massacre in Paris on the 13 November in which 130 people were killed by Islamic State terrorists.

In the letter, Keogh demanded concrete assurances that junior doctors would be prepared to work in the event of a similar terror attack taking place while they were on strike. The underlying implication is that striking doctors are as much a risk to the lives of the public as terrorists – virtually on the same level as IS [ISIS].

These emails show that this letter from Keogh was not all his own work. His original letter was not considered strong enough by the Tories so they decided to ‘sex it up’. Keogh reportedly was told by an official from the Department of Health a week after the Paris massacre that the risk of a ‘major incident’ in the UK would be ‘pressed quite hard in the media once the strike is formally announced’.

The official went on to tell Keogh that: ‘The more hard-edged you can be on this the better.’ Keogh was only too willing to go along with this – indeed, it appears the letter went back and forth between him and Whitehall before it was finally approved by the Tory health minister Jeremy Hunt.

The Paris massacre, seen by most as a human tragedy, was seized upon by the Tories as a golden opportunity to lump doctors in with terrorists as part of a propaganda offensive to portray them as evil money grubbers who care nothing for human life.

3,000 doctors wrote to Keogh after his letter was published, accusing him of whipping up fear of a terrorist attack for ‘political purposes’. The publication of these emails confirms this. They also reveal that Keogh was clearly nervous of appearing before the media to defend his accusation that doctors would not come back to work in the event of an attack. Hunt agreed that he would not be forced to submit to questioning about his letter as long as it was ‘clear’ about putting forward the Tory propaganda line.

Keogh’s letter was a dismal failure, universally dismissed as part of a vicious propaganda war designed to alienate workers from the fight by junior doctors, but it does show the depths to which the Tories are prepared to go in their war against the NHS.

Junior doctors have won the support of the entire working class for their stand in defence not just of their own contracts but in defence of the NHS itself. The working class knows that the real threat to lives comes from a Tory government that is closing wards and hospitals, starving the NHS of the funds it needs as part of the Tory strategy of completely privatising the health service.

Student nurses have called a mass rally in London today as part of a campaign against the ending of student bursaries and forcing them to pay £9,000 a year in tuition fees for the privilege of working flat out in a vital public service. Along with the junior doctors, they stand in the forefront of the struggle to defeat all the cuts and privatisation that will destroy the NHS.

They must not be left to defend the NHS on their own. Workers must demand that the TUC act and put an end to this war on the NHS by calling a general strike to kick out the Tories and go forward to a workers government and a socialist society which will guarantee a free health service.

TORY ministers received another hammer blow yesterday when hospital dentists announced they would join junior doctors in their historic strikes and down drills next month: here.

Tory plans for the NHS are a triumph of ideology over reason, fairness and scientific rigour, which we all have a duty to resist, argues LEFTERIS ZOGRAFOS. THE British Medical Association (BMA) announced last week that industrial action by junior doctors is set to take place, after talks over a new contract ended unsuccessfully. Three dates for industrial action have been announced — the first being tomorrow: here.

STUDENT nurses and midwives marched through London and other cities over the weekend in protest against government plans to replace their bursaries with loans: here.